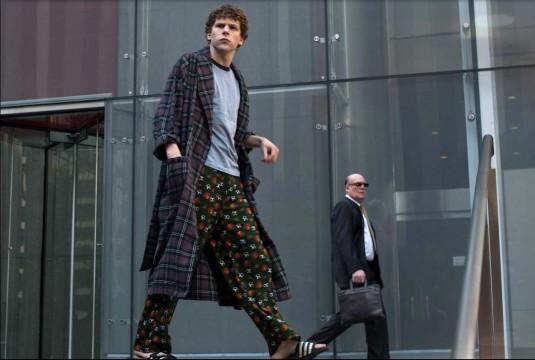 
The story of Facebook would be unbelievable if it wasn’t true. The social networking website conceived of just seven years ago by Mark Zuckerberg has altered the way in which people communicate irrevocably. Following in the footsteps of developments like the telephone system and air travel, Facebook has made the concept of distance still more insignificant and has again redefined, or at least re-qualified, isolation. Someone can take a photograph in Nepal and, via Facebook, it can be seen immediately by their friends. Equally, a Facebook user can at any time check up on their friends, be checked up on by their friends, and communicate directly with them. The human crusade against loneliness and isolation has found a new weapon. The lure of these powers has proven powerful. In the seven years since Facebook was born it has accumulated over 500 million users (1 in 14 of the Earth’s population) and is worth an estimated $25 billion. The Social Network takes us back to the days and months leading up to the creation of Facebook, and undertakes the age-old task of telling the story of beginnings.

Mark Zuckerberg (Jesse Eisenberg) is a nerdy college student (or as nerdy as Hollywood would allow), a brilliant computer programmer, a driven, caring and restless revolutionary and a self-pitying misanthrope. Or at least this is director David Fincher’s (Seven, Fight Club, The Curious Case of Benjamin Button) and writer Aaron Sorkin’s (The West Wing) portrayal of him. This somewhat complex amalgam of character traits actually make for a very complete and engaging person in Eisenberg’s Zuckerberg, and it is his inherent intrigue and charisma that really engages the audience. This comes to the fore in his brushes with establishment figures (mostly prosecution lawyers), who frequently find their rhetoric and jargon dissected with a keen eye which sees through the empty words established and grand institutions often employ. It is these moments when Zuckerberg appears his most vulnerable though. His nonchalance in the face of baying plaintiffs and condescending lawyers is a brave front. His confidence in his ability, his achievements and his ‘mission’ cannot wholly shield him from the pressure of the two hearings we see him in simultaneously.

Essentially though, The Social Network is a film about Mark’s relationships with people. His best friend and co-founder of Facebook Eduardo Saverin (Andrew Garfield), his ex-girlfriend Erica Albright (Rooney Mara) and his acquired business partner Sean Parker (Justin Timberlake). At the story’s beginning Mark and Eduardo are the closest of friends, and they embark together on ‘thefacebook’ project. As Facebook takes off, however, Mark’s vision seems increasingly pointed upwards and away from the grounded and, it must be said, somewhat unimaginative realism of Eduardo’s approach. This is compounded by the appearance of Parker, a sort of weekend anarchist playboy character, whose genuine nuggets of good advice are quickly lost in the half-baked and exaggerated social rebellion fantasies he seems to live only through partying and taking cocaine with underage interns. Parker and Eduardo clash from their very first meeting, and Eduardo’s down-to-earth sensibilities are quite easily trumped in Mark’s imagination by Parker’s reach for the stars/conquer the world mentality. This Shakespearian love triangle relocated into the business world finally erupts when Eduardo is tricked out of his share of Facebook, and culminates in a terrific showdown in the newly purchased Facebook offices and Mark being sued for $600 million by his ‘best friend’.

Overall, The Social Network is a funny, gripping and well-conceived film. The characters are written very well, not surprising given Sorkin’s past work, and played brilliantly. Jesse Eisenberg in particular is always engaging, shuffling in haste through the New England snow in flip flop slippers and white socks with an idea always in mind, and a wry remark waiting for the next scene. Justin Timberlake somehow manages to capture an obnoxious arrogance that makes his character a believable false prophet for a young, popularity-focussed entrepreneur, and works as a total opposite to Garfield’s accomplished portrayal of a wary, caring and sensitive young man. It’s a good story, quite extraordinary actually, and the impetuous infighting between 19 year olds who have made billions from an idea is not left without redemption. Agreements are made. Our readers will be glad to know that there is enough in $25 billion to share around between half a dozen people after all.