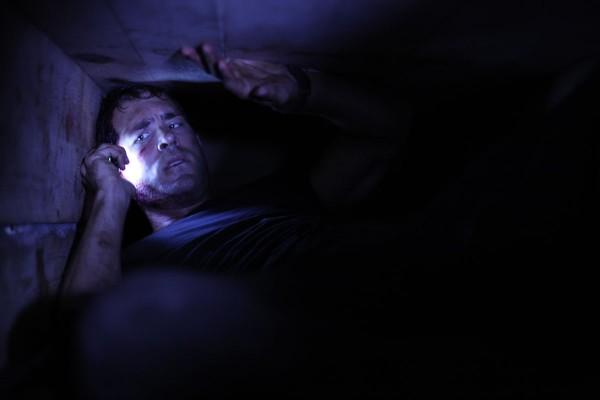 
The opening credits take us, visually, into deeper and deeper ground and the film keeps us there. ‘Buried’ is an exact title.

Probably, a warning should be offered that the setting is solely the interior of the coffin where a US truck driver working in Iraq in 2006 finds himself after the insurgent attack on the convoy in which he was driving. Anyone who has strong claustrophobia or finds the prospect of being buried alive too much to imagine will find the film too harrowing.

Writer, Christ Sparling, must have taken up a dare that he could or could not write a full-length feature film set solely in a coffin. Certainly a risk – and perhaps not too much of a box-office bonanza. But, he has pulled it off and director, editor, Rodrigo Cortés has succeeded in creating effective visuals for the writing. This is a Spanish production, in English.

After the descending credits, the film stays in the dark for some moments, the audience gradually hearing some movement until the driver, Paul Conroy (Ryan Reynolds) comes to and discovers his predicament. This gives the audience some time to accept what the film is showing and whether it wants to watch this story or not.

First of all, Paul has a cigarette lighter which enables him, and us, to discover the confines of the wooden box in which he has been interred. His mobile phone vibrates, so we know he has some lifeline. Perhaps this is a touch unrealistic (not too many survivors to verify whether it is realistic or not) but the lighter and the phone enable the drama to unfold. He also has a pencil and, when the abductors ring and demand that he make a confession video on his phone, he finds a beam light, a torch and the written text for his video.

The film works well on the human level, the predicament of an ordinary man, non-military, who finds himself trapped and the source for ransom money. Audiences who identify with Paul will be asking themselves how they would react in these conditions, the fear, the frustration, the anger, the dread. The device of the phone also enables him to try to contact his wife and son in Michigan, the offices of his trucking company, the State Department, his mother.

Time passes, the deadline gets closer, the oxygen could run out, the lighter fluid could be used up, the batteries on his torch and mobile phone could run down. A snake slithers through a crack in the wooden planks of the coffin.

So, the film works well on the human level.

However, the film works well on a second level, that of the war in Iraq and its consequences. Paul is not military. He works for a company (which shows scant respect for its employees in a sequence which exposes greed and heartlessness at the centre of company bureaucracy for business interests in occupied Iraq). While he is in contact with the authorities in Washington (some sympathy momentarily here), and they are making attempts to locate and rescue him, a lot of the dialogue, we realise, is official double talk, attempts at morale-boosting, words of encouragement to keep hopes alive.

The calls of the abductor, his sending of a video of an execution, the background of his and the Iraqi people's suffering add to the harrowing experience of the film.

The film seems about to end several times. Because it is a Spanish film rather than an American film, we are wondering whether Paul will be rescued and the ending happy. We think it won't, will be, possibly... And we leave the cinema soberly reflecting on such a life and death situation, why this happens, and how we might react in such circumstances.

This review was originally published by the Australian Catholic Office for Film and Broadcasting.

The Eucharist and care of creation – an ancient perspective