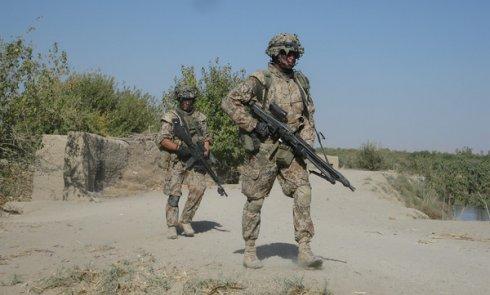 
It’s unlikely that you’ll want to watch Armadillo for kicks, but in future years it might be one of the films we look back on to help us remember that we lived in a time of war. The war in Afghanistan, to those of us who have no emotional ties to the people on either side, probably flickers in and out of our consciousness – the artificial seriousness at the start of Prime Minister’s Questions when the litany of the dead soldiers is read out, or the news that one of Alan Sugar’s potential apprentices has quit the show to be with his wounded brother in hospital. Armadillo is a documentary story that may, alongside films like Restrepo and The Hurt Locker, remain untouched by the fluctuations of more transient media and be regarded as a contemporary reflection on the wars that our governments have fought on our behalf.

Janus Metz Pedersen and his cameraman Lars Skree spent six months with a platoon of young Danish soldiers in Helmand province, Afghanistan. The access they were given was at times so intimate that I had to re-check that this was a documentary: not only do they accompany the young men on their patrols and on a dawn assault against Taliban fighters, but they have captured footage of the men as they wash, party, are shot, wounded, and eventually reunited with their families. As a database of life for foreign soldiers in Afghanistan it may well be invaluable, simply in its capturing of data that is unavailable to civilians: the processes and weapons involved in a war, the boredom and the terror, the total uncertainty until shots are fired of who is an enemy and who is a civilian. If nothing else, watching the film can only serve to educate those who watch it.

Watching it is a particularly physical and brutal experience. We have come to expect from documentaries a neutral camera, the all-seeing eye that observes but does not pass judgement. One of Armadillo’s strengths is its adept editing, with a skill of juxtaposition that we would associate more with skilful story-telling than with the rag-bag of events that reality usually throws up. The opening scenes that show the soldier’s goodbyes to their families and girlfriends are intercut with heavy-metal soundtracked shots of their leaving party, complete with tequila and a stripper. Later we see their attempts at entertainment – more pornography, and first person shooters on the Xbox that suddenly become real life explosions outside the camp. The story climaxes with a small assault against the enemy, which culminates in the lugging of corpses out of a ditch. To see this on film and to trust and know that this is real rather than special effects is a destabilising experience.

The question of what they are doing there reappears in the men’s conversations: twice, three times the word ‘adventure’ appears. The excitement of this soon crashes into the monotony and ambiguity of patrols, and once the men, for all of whom this is their first exposure to combat, encounter the real deaths of comrades and supposed enemies, all of the energy that has been bundled up into the anticipation of heroism starts to corrupt. ‘It’s so meaningless you can’t grasp it,’ says Mads, one of the youngest. We hear descriptions of bodies after an explosion, with body parts and ‘a heart lying around’. The war seems totally pointless, the real victims the villagers who the soldiers are supposedly trying to save: when queried why he won’t collaborate with them, one teacher points out that both the Taliban and the Danes have guns, and once the Danes disappear, he’ll have his throat cut. We later find out in a throwaway sentence that this man has been blown up.

In Denmark Armadillo has caused controversy over the behaviour it has captured and publicised of the soldiers during the dawn raid – in short, that they exhibited a callous gung-ho disregard for their enemies, that adrenaline and revenge took the place of professionalism. As news comes in of the platoon commander having to field queries from higher up about the story breaking through one of the soldier’s mothers, we’re made to question what it was that we saw during the raid, captured in brave but disrupted camerawork under fire. The question ramifies into several areas – where should the loyalty of the filmmakers lie, with the men who have housed and trusted them for six months, or in a notion of truth that they want to reveal to the public? But can those who aren’t there really understand the context, and without understanding, how true a judgement can be made? What looks like insensitivity – laughing about the kills and the macho bragging of who shot who – is just as truly a survival mechanism. And though questions about the ethics of these young soldiers are being asked, what about the questions that need to be asked about the ethics of story-telling? A documentary has even more responsibility to mimic truth; but Armadillo is a story, spliced together with genuine events, true, but a story put together from hours and days of filming. And what of the behaviour of Janus and Lars in that camp for so long, and on that dawn raid – are we to suppose that on returning to the camp, after seeing friends shot, strangers die in a ditch and their own lives nearly foreshortened, that they sat calmly and quietly and read a pleasant book?

Armadillo is cinema at its most emotive. At the root of that word ‘emotion’ is the Latin word meaning ‘to move out, to remove’, and Armadillo removed those of us in the press screening in the upstairs room of a private members club in Soho, to somewhere not so long ago and not so far away.

The Place Beyond the Pines