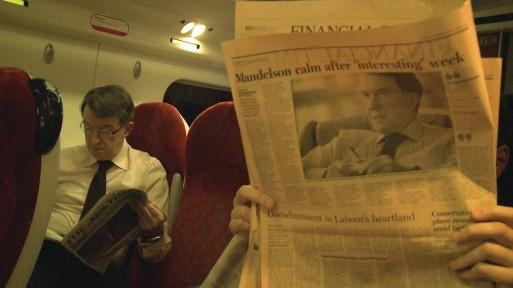 
Several of the seats for the press screening of Mandelson: The Real PM? were reserved in the school-assembly style of pieces of block-capitalled white A4 paper laid on the chairs. It’s unlikely that Peter Mandelson would have approved of such a casual way of making whoever the special guests were (friends of the director, Hannah Rothschild, was my guess) feel special: if this really had been a film to stand alongside his book as statements of his influence on political history, then I’d imagine that PM (as he is provocatively subtitled throughout the film) would have wanted much more of a fuss made. As it stands, it’s unlikely that PM will be paying much attention to the film, which does nothing to justify its hype: it’s a poor puff-piece of a film, with Rothschild unable to garner anything of interest from the 8 months she spent with him.

A protean theory that I’ve been playing with recently involves the correlation between a film’s soundtrack and the confidence it has in its material; namely that for films that don’t really trust their own quality, the more intrusive a soundtrack they involve. There are numerous examples where this theory falls down – where an excellent film has an excellent soundtrack – but Mandelson happily proves me right. His pronouncements are backed with either a Panoroma-style ominous bass and beat, or a jaunty, upper class jazz. The effect is irritating either way: when he says “I know everything” to an aide, he’s talking very specifically about a recent news story, and zooming in on his face with a rumble of drums doesn’t make him look an evil lord. ‘The Lord of Darkness’ is of course one of the more polite names he has been called over the years, and the risk is that, faced with paucity of material she has gathered, Rothschild was tempted into a Lord of the Rings type coronation: Mandelson as Sauron?

So what do we learn about Mandelson? Only what we knew already. His talent and ego are both colossal. He is extremely charming one on one. He didn’t see there was much hope in the Labour campaign for the election – ‘futile, fucked and finished’ was how he allegedly joked about it in private, but as we don’t see him saying this in the film I am left to assume that this is a quotation from his book.

The problem is that Rothschild is no match for Mandelson in her interviewing – and this is meant as no slight on her. Trying to provoke him into a revelation about his two sackings from Government, she comments that Blair’s actions ‘seemed very harsh.’ ‘And?’ replies PM. It’s an easy attack that he must have seen coming – that’s life, you get over it, you move on, he’s able to answer, the clichés revealing exactly ziltch. At the end of the film, with Mandelson understandably exhausted and a little withdrawn following Labour’s election failure and his rejection by the Liberal Democrats, she pushes him, saying that he’s being unresponsive and that there’s no point in carrying on. Fine, he says. ‘Are you ever alone?’ she asks. It’s hardly vintage Paxman and he dismisses the question with a quite accurate, ‘I’m a politician, Hannah, not a mannequin.’

The few moments of interest come in others’ reactions to him. His staff clearly feel very affectionate towards him, if the farewell party is anything to go by. Ken Clarke and George Osborne were both reduced to laughter at his childish teasing. Most interesting was Jon Snow’s breathless appreciation of the Mandelson effect following the election debates: ‘he took all the oxygen from the room’. This is a worthwhile reminder of one of the reasons why some of the press have always had it in for Mandelson, and Alastair Campbell – both of them were among the first to play the press at their own game, and treating journalists as servants they could manipulate. It’s the joy of journalists and editors to feel that they are able to write the stories out of the facts of the day, rather than be told, as Mandelson continuously does, what it was they just saw and what it meant.

The most ‘intimate’ the film gets is watching PM put some trousers on (we don’t even get to see what colour his underwear is). Ultimately this is what has happened with Mandelson: The Real PM? – he has chewed up another well-meaning journalist in the most pleasant way possible and the end product is an anodyne, slightly dull piece of film.