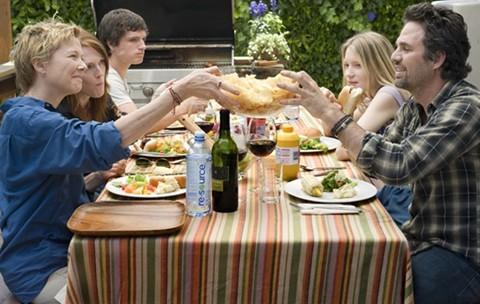 
The team behind The Kids Are All Right seem to be so pleased to represent a lesbian nuclear family that they forgot to give their characters any personalities. While visibility is obviously a concern, the lack of any depth rapidly turns this domestic drama into a by-the-numbers morality play.

The plot offers potential for an interesting take on the contemporary American family. Professional Mom and Slacker Mom are raising two children (essentially Bart and Lisa Simpson in the flesh). When the daughter reaches eighteen, she contacts her biological father, a swaggering heterosexual ready for a midlife crisis. He comes into their already tense family, testing the relationships with his organic, smug, swinging sexuality.

The story does little that isn’t predictable. Bart needs a father figure, but isn’t satisfied by the John Travolta clone who donated his sperm. Lisa loves his easy charm. Professional Mom is already on the way to alcoholism, leaving Slacker Mom open to a frantic seduction. Luckily, Slacker Mom cries in front of the family, and a sentence from Bart is enough to heal the wounds of adultery and mistrust.

The film goes out of its way to stress how ‘normal’ this nuclear family is. Professional Mom brings her work stress home. Bart and Lisa have teenage tantrums and resist their parents. Every character is a stereotype, and the moral dilemma – how to cope with the intrusion of a biological parent – is dealt with easily, as soon as he reveals himself as an immature philanderer.

The other moral drama of The Kids Are All Right is the adultery between Slacker Mom and Biological Father. Quite why this couple pair up is never made clear – perhaps Slacker Mom is responding to some atavistic impulse, or maybe Biological Father just oozes sexual pheromones. If the reason behind their tryst is obscure, the resolution – Professional Mom shouts at everyone – is equally unsophisticated. There is a moment where Biological Father has a revelation about his low-down ways, only this is squandered for a more melodramatic revelation of the adultery.

The unimaginative handling of the drama is matched by a predictable form. The children begin to bond with Biological Father: you need a montage. Slacker Mom makes her apology: ensure that it is moving by cutting to crying family members. The question of the son’s need for a male role-model: have him caning drugs and hanging about with a skate-boarding jock stereotype. Ironically, the representation of males in the film is so two-dimensional, it becomes offensive.

Given that plot and character are subsumed to the playing out of the melodrama, it is unsurprising that the morality behind the conclusion is conservative: rather than interrogating the problems arising from the situation, the finale falls back on ‘love conquers all’, without resolving the various tensions. Biological father is simply excluded, the son’s needs are unanswered, and the daughter goes off to university, doubtless to academic success.

In the opening credits, the film sets up the conflicts that generate the action, yet never thinks to go beyond the superficial. Despite some strong performances – Julianne Moore, as always – the cast are given little to do beyond move from predictable set-piece to predictable set-piece.


'The Kids Are All Right' Trailer HD

Time and Relative Dimensions in Faith: Religion and Doctor Who

The Jesuit Guide to (Almost) Everything: A Spirituality for Real Life

The Management of the Church