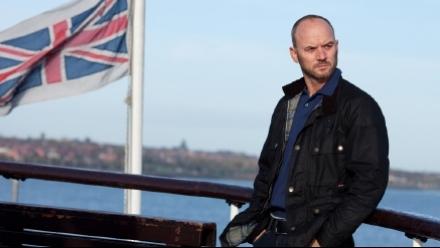 Route Irish follows the story of Fergus, Frankie and Rachel. Fergus and Frankie are best friends as teenagers, and the film starts off with the two dreaming about what their future travels will be like, and where they will go. Fergus and Frankie both pursue military careers. However, Fergus has joined a private security company operating out of Baghdad, and convinces Frankie to join the outfit. The film jumps to Liverpool, where Fergus discovers that Frankie has been killed on Route Irish in Baghdad. Route Irish is a seven and a half mile road joining the Green Zone in the centre of Baghdad with the Baghdad International Airport, and is reputedly the most dangerous road in the world. Due to the fact that the road is so dangerous, no serious questions as to Frankie’s death are asked. This is just an unfortunate outcome of armed conflict. Fergus meets Rachel at the funeral, Frankie’s partner, and they both begin their struggle to come to terms with Frankie’s death. In the process, however, Fergus is faced with the real possibility that Frankie’s death was not an open and shut case, and that there is more to his story than meets the eye. A crucial piece of the evidence in all of this is a cell phone belonging to a civilian in Iraq, and the camera of the phone has captured footage from a week or so prior to Frankie’s death. He begins to delve deeper into the circumstances surrounding Frankie’s death, and uncovers corruption, greed, deception, and of course his own complicity with all of this. Rachel learns things from Fergus about aspects of Frankie’s life that she was ignorant of and she struggles to face her own pain as the increasingly dubious facts of Frankie’s death unravel. However, the more Fergus unravels, the more he wishes he hadn’t looked. The full horror and reality of war and those who profit from it is made real to him, as he tries to take revenge for Frankie’s death.

This film makes the horrors of war real to viewers, and forces us to realise some of the reality of the warfare in Iraq. Normally, in a war film, one follows the lives of those involved as they take part in the war ‘over there’. Scenes are shot of the characters fighting bravely on foreign soil, and the impact is shown on screen through explosions and hand-to-hand combat. Not so here, Ken Loach directs a very raw portrayal of the human struggle in war. The explosions depicted in this film are mainly ‘internal’, as the film is focused on the emotional impact of the war on Fergus, Frankie and Rachel. The emotional turmoil of war has made a devastating impact on the characters, and they struggle to deal with this impact as they return to everyday life. For Route Irish, Loach joins up again with the writer Paul Laverty. In 2006, Laverty worked with Loach on the production of The Wind the Shakes the Barley, a film looking at Republicans in early 20th century Ireland. Both films have the focus on the effects of war on the characters, but Route Irish is much less focussed on the external violence involved in the conflict. I was very pleasantly surprised at the lack of fascination with the ‘gory details’ of war in Route Irish, and the scenes of conflict were added, not to shock, but to support the unravelling mystery of Frankie’s death. By drawing us into the story of three people whose relationships have been impacted by the violence in Iraq, we are drawn to reflect on how many deaths and family tragedies we don’t know about. In addition, the story of war veterans returning to Britain and having to cope with everyday life while trying to work through the numerous traumatic experiences they have had, is largely untold. Route Irish tells this story well. Perhaps most significantly, though, the story of the profits to be made by private companies in the middle of warfare also goes unexplored. Route Irish explores this murky world without censorship.

From one perspective, Laverty missed an opportunity in the storyline. The impact on the citizens of Iraq is only touched on briefly. Frankie is reported to have helped local citizens before his death in Iraq, which Fergus discovers in his investigations, and more exploration of the impact on local families in Iraq would have enriched the story greatly. Also, Route Irish fell into the trap of trying to please too many people. While having a character focus and telling the story of emotional impact, Fergus at times also tries to play the part of the action hero, saving the day and trying to bring justice to an unjust situation. This has the effect of diluting the impact of the film, leaving you with mixed feelings. However, even if Fergus does portray elements of Schwarzenegger, his character portrays the fallen hero as opposed to Mr Invincible, making for some interesting character development.

Route Irish is a drama come thriller, and does take itself very seriously. It is heavy, and is tragic. But it is an excellent exploration of the emotional impact of armed conflict in Iraq. It also raises the awareness of the difficulties facing re-integration into society of those involved, together with the outsourcing of the conflict to private companies.