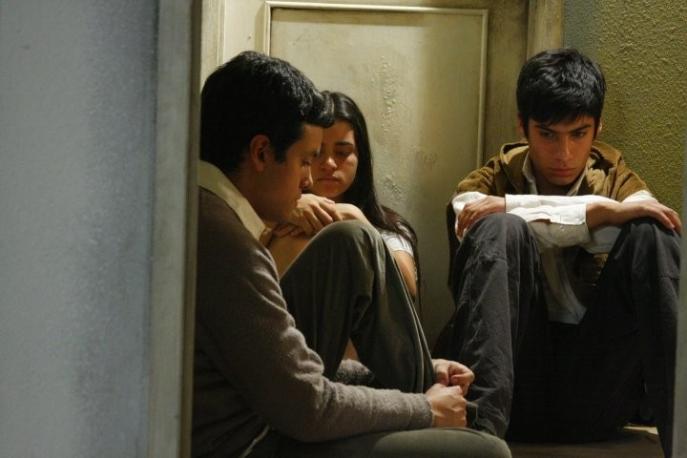 
Staggering across the wide cement spaces of a smart shopping centre, Papá finally dies in a pool of his own regurgitated blood, if only after a bizarre zombie-like grope towards the half-naked female forms in the boutique windows. His family are left with only a handful of half-mended watches, a score of wall-clocks, and (salted and stored in shoe boxes around the house for later use) a collection of body parts from some of their previous victims.

After an aborted attempt at revisiting their father’s watch-mending business, a struggle ensues for control and leadership in the family between the mother and the eldest son, Alfredo. In this Alfredo is supported by his sister, Sabina, who also backs him in the other power struggle with his younger brother, Gustavo. Thus is established an oedipal theme at the heart of the hungry house of cannibals (though one with a gastronomic twist). This is only one layer in the intelligence which surrounds with other complex theories and possibilities the simple idea of a film about a family who kills and eats other people. The most immediately striking of these is the almost criminological interest the film has in the victims of these serial killers, clearly showing that these are usually always the weak and the vulnerable, and that in Mexico’s cities those are prostitutes and street-children. In this critique of modern Mexico, the cannibalism has an atavistic quality, possibly standing for the darker elements of Mexico’s self-identity and history that have been handed down from the past. Certainly, the film is interested in how cycles of abuse are repeated in the next generation, for a second theme is about the corruption of sexual desire by family abuse and violence, and how that becomes expressed (in the case of this family) in the horrifically unbounded collisions of passion, desire, tradition, rage and hunger.

So this is a horror film, but it’s a very arty horror film, and one that plays with the genre, fully using it to touch on a number of major contemporary issues. In so doing, the film does a number of things that may seem unusual or odd to an art-house audience, including the addition of comic elements and even political satire. The satire includes an explicit reference to Mexican corruption scandals, which —apparently — have drawn laughter from Mexican audiences[1]. The comic elements come from a sub-plot focusing on the two down-at-heel policemen who decide that fame and fortune will be theirs if they can catch the cannibals who have been the secret scandal plaguing the city for so long. Though art-house viewers might wonder how such flippancy can sit within a film that is ‘horrific’ and has its genuinely shocking moments, it will be familiar to anyone who is knows the genre, and recognises the often simple absurdity of some of the exaggerated, gothic schlock that makes a horror film with cannibalism what it is (one need only introduce readers of Thinking Faith to The Texas Chainsaw Massacre to illustrate this point, and first-time director Jorge Michel Grau is well-read in the genre, referring[2] to directors Dario Argento, Mario Bava, and John Carpenter, among others, film-makers whose work he became acquainted with during his childhood, hanging around his father’s video-rental shop).

Then there is the artiness of the piece (which in itself signals that this is something other than a B movie): it’s very cleverly shot — a restricted palette of browns, dirty cream and muddy russets is used to create an intense vision of a locked-in and soiled poverty in the house of horror. There are some electric camera angles, and some very careful mise en scène: a slow zoom out from the father’s empty chair, a leitmotif of quietly closing doors, and things seen in secret from above or below, through the strange distorting angles of the house.

The closing doors are probably the key to the whole thing: they show us that despite all the headlines about cannibalism, what Jorge Michel Grau is really interested in is abuse and family dysfunction: abuse, and its influence on the developing child, and the extent to which generations — and possibly entire societies — can live in the shadow of the darkness of the past. So it is that after the death of their father, the family stagnates in a twenty-minute study of power, rage and secrecy: the grown-up children cower like beaten toddlers in the presence of their mother’s unboundaried anger; coded and almost impenetrable language is used to hide the reality of violence and abuse; and caring intimacies between brothers and sister — seen just before the doors slowly swing shut — are just that little-bit too close. Alfredo attempts to take control of the family by bringing home a victim — like all patriarchs, he has to put food on the table. To do this, he stalks and finally seduces a young man in a gay night-club. Whether his pleasure lies in the release of repressed desire and the highly physical seduction, or in the prospect of the flesh on the plate (rather than in the bed) is left unresolved. What is clear, is that for this family, desire and violence have become tragically synonymous.

Cannibalism, therefore, is merely a metaphor for the wickedness and pain that humans can inflict on each other. If your thing really is The Texas Chainsaw Massacre, you’re going to be somewhat disappointed by this film — there are some nasty moments, but really very little ‘splatter’, and a lot more thinking.

[1] Interview of Jorge Michel Grau by Seán Glass in ioncinema.com