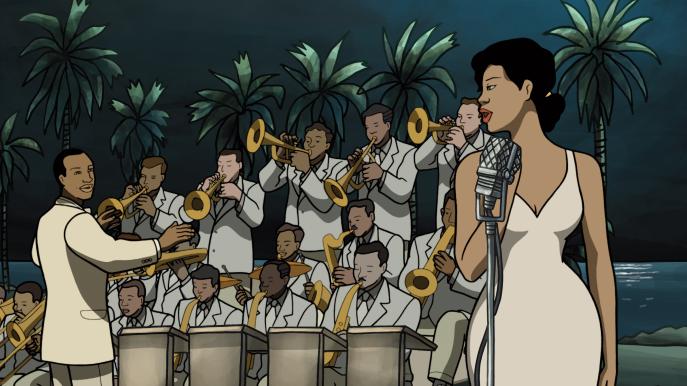 
Before you read any more of this review please turn up the volume on your computer and set playing the soundtrack to this sweet film by clicking here. By the time you reach the third paragraph I would hope that the awkward rhythms of the words have been lost in the music and before the final paragraph I predict that you will have left this review behind and are happily lost somewhere in Bebo Valdés’ nostalgic songs. Watching Chico & Rita was a similar experience: the plot is nothing really to speak of, but that fades into irrelevance when compared to the quality of the animation and jazz.

The two leads are Cuban musicians caught up in the emigration of talent to the opportunities of New York in the 1940s and 50s. Chico is a pianist and composer, though as the film opens he is an old man pouring himself a solo bottle of beer whilst he tries to set the radio’s dial to the right memories. The night he meets Rita he is out on the town with a friend and two of the Americans who have come, pre-Castro, to the holiday island of Cuba. The two blondes are soon forgotten as Rita starts to sing: her voice is that of Idania Valdés, the first time (and hopefully not the last) that I’ve heard her voice, which, even emerging from an animation’s mouth, is intoxicating.

From this first meeting the film charts the love life and ambitions of the pianist and the singer, as their paths meet and separate across continents and film sets. It’s a world of music and money and opportunities: Rita becomes a Hollywood actress, Chico tours with Dizzy Gillespie. Plot wise there isn’t much to surprise: their arguments and reunions are straight out of the Little Book of Latin Lovers, all tempests and other women, and the happy resolution can be seen coming with a certainty that the best of jazz usually disguises until the last minute. This is hardly a criticism though: the film’s publicity makes it pretty clear that this is one for the romantics and though I can’t say what hardcore jazz fans would make of it, it was a happy education for me: Thelonious Monk, Chano Pozo, Charlie Parker introduced amid the crossover of Cuban and New York rhythms.

It’s surprisingly sensual for an animation, and I struggle to think of an animated film that comes close to capturing the same sexuality as it does. It isn’t just Chico and Rita’s love-making, nor her over-exaggerated curves – this isn’t a childish Jessica Rabbit sexuality but a far more skilful mingling of line and colour, their relationship blurring in with the rest of the landscape. I was reminded of Larkin’s line in For Sidney Bechet about the effect of Bechet’s clarinet: ‘on me your voice falls as they say love should, / Like an enormous yes.’

There’s an interesting tension between the sensual romance of Cuba and the two lovers, which teeters on the edge of sentimentalising Havana and its poverty and music, and the desire for authenticity. In part Chico & Rita relies on its music for this realness: Bebo Valdés (born in 1918), for example, was composing and arranging in Havana at the same time as Chico and Rita play out their fictional lives; and Chico finds himself in the pianist’s nightmare of stepping into an orchestra at the last minute, full of confidence, only to find himself having to sight-read Stravinsky’s Ebony Concerto.

But the social realities that draw Rita to New York are just sketched in: the racism in Cuba, which is ensnared by financial inequalities into being a playground for white foreigners, and in New York, where Chano Pozo teaches them about the clubs where they aren’t welcome. It doesn’t delve much deeper than this: the romance takes the eye throughout, and there’s not much reading of the racism at work in Rita’s relationship with the films she’s cast in and the men with whom she is involved.

Any thinness in the plot and realism of Chico & Rita is hardly the point though: it’s a sweet and unusual film for this time of year and any music lovers will be more than satisfied.

Picking up the baton

The Jesuits and the Tudors

Desertification as a spiritual challenge