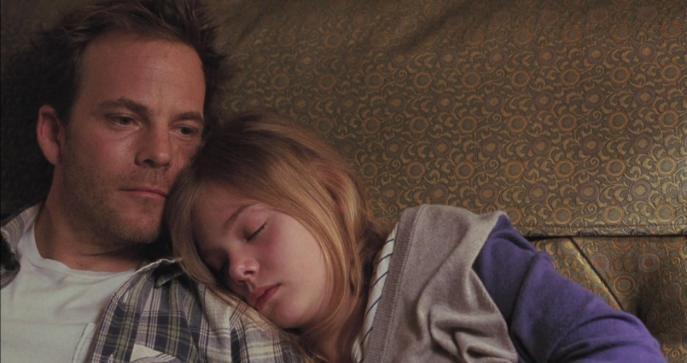 
Sofia Coppola’s Lost in Translation (2003) was a great film – you’ve probably seen it. Bill Murray plays a slightly seedy but basically quite cool ex-star, trapped in the disorientating nowhere of an international hotel in Tokyo; bored, lonely, and abandoned by her ambitious husband, newly-married Scarlett Johansson makes friends with him, and everything and nothing happens: there’s a simmering tension, a certain amount of delicately implied yearning, but that’s it. The obvious territory is the psycho-drama of father-daughter relationships, the impossible (unspeakable) desires that sometimes circle around them and how that relationship provides many young women with a model for other relationships in their lives. It’s a theme that a number of writers and dramatists have explored, not least Arthur Miller in A View from the Bridge.

So anyone who enjoyed Lost in Translation will have been looking forward to a reprise of the themes explored there, delivered with the same insight and sensitivity, the same carefully-constructed cinematographic eye, and perhaps deeper understanding about the relationships involved. Indeed most of the press about Somewhere seems not to have focused on the film, but on this possible psychological sub-text and the extent to which it may or may not be autobiographical. Certainly, the interview in the UK’s Guardian attempted (and failed) to get Sofia Coppola to talk about her relationship with her father. Her unwillingness at first seems rather odd, given the heavy trailing of the Electra theme, but now that I’ve seen Somewhere myself, I’m afraid that I suspect the focus on father-daughter relationships in the reviews is because the rest of the film is actually very difficult to write about. Even harder to write about if it’s been awarded the Golden Lion at Venice, and you can’t quite see why.

One problem is partly misrepresentation: despite the press, and despite Elle Fanning’s (very impressive) performance, the real centre of this film is not father-daughter relationships but boredom and disappointment. Obviously the father-daughter thing is there, and we see eleven-year old Cleo (Fanning) and her dad (Stephen Dorff) interacting in countless virtual games of tennis and ‘guitar hero’ on the Wii, and even a pointless game of table tennis in someone’s yard. But no insight is offered into this relationship. It’s not even particularly believable.

For a start there are a number of continuity and plot problems. Here’s one: the plot suggests Dorff’s character is a weekend dad, but also that this is the first Saturday he’s taken her ice-skating, or noticed that she’s a really good skater… I know parents often underestimate their children’s skills, and forget stuff, but is it really possible that a father – even a self-obsessed one – might not know his daughter’s been skating for three years? A junkie or a drunk might have those sorts of gaping lacunae in his memory, but not a functioning dope such as the film star Stephen Dorff plays. And then there’s the radiantly unbelievable character of twelve-year old Cleo in all this. Cleo’s mum ‘disappears’ to get some time to herself to ‘work stuff out’ (well that’s credible, I’ve seen self-obsessed parents run away and leave their children in the care of others), and Cleo’s dad insulates himself from real self-awareness by one-night stand after another (again, realistic). But Cleo herself is radiant, charming, forgiving, and (nauseatingly) indulgent of her egotistical father. The children of screwed-up parents are just not like this. It might be the territory of grim narratives such as A Boy Named Dave, but an early adolescent in that sort of dysfunctional family would be screaming, weeping or lashing-out, not restrainedly answering the small talk questions of her father’s latest, unnamed, mistress over the breakfast orange-juice.

So what is the father-daughter relationship offered to us? Cleo shares her father’s bed, eats ice-cream with him late at night, like a lover, and sits by the side of the pool and sunbathes with him. The Electra elements are there, but Coppola’s resistance to discuss in interviews the psychodynamic elements of Somewhere are a symptom of her unwillingness to explore them in the film itself – and the result is simply superficial, or worse, wish-fulfilment.

And cinematographically, this film is utterly unmemorable. There are about six interesting shots, and they’re all in the trailer. The rest of the film is full of utterly predictable directing: Johnny Marco staring out from a balcony over the lights of LA, Johnny Marco brushing his teeth, Johnny Marco driving along the interminable freeway network of LA (a cliché since CHIPS, at least). Even the best shot (several minutes focused on Marco as a latex mask dries on his shrouded, isolated face) is ruined by a twitchy zoom.

The second-best moment is the implied contrast between Cleo’s ice dancing and her father’s repeated use of pole-dancers. In so doing, there is some attempt to raise the idea of the male gaze and the objectification of the women it falls on. But, as with the other engaging possibilities in the film, this potentially powerful and shocking theme is left undeveloped, leaving us with the impression that all we’ve done for the last two hours is watch a random collection of someone else’s home videos.

Any intelligent viewer will realise that what we are offered here pretends to be a critique of vapid, self-indulgent stardom. It seems unfortunate, then, that Somewhere should be the full two-hours when really this film could have achieved the same effect as a twenty-minute short. The resulting feature-length film is dull and self-indulgent: it’s as if they have decided not just to represent boredom but to offer us an experience of it. Maybe that’s the point of the whole piece – but sharper wits have realised that such disregard of your audience is at best discourteous and at worse a self-defeating arrogance. John Cage, after all, made his point in 4’33” : if he’d called it One Hour Fifty-Nine, I doubt it would now be vying for the Christmas No. 1 slot.