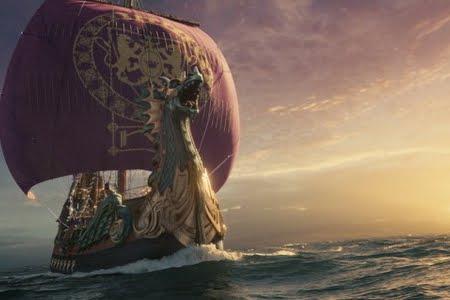 
The Voyage of the Dawn Treader finds Lucy and Edmund a year after the events of Prince Caspian, staying in Cambridge with their aunt and uncle and odious cousin, Eustace. One day when the three children are in Lucy’s room, a painting of a ship at sea suddenly comes alive and engulfs the room, pitching the children into Narnia. They are welcomed aboard the ship by their friends, Caspian and Reepicheep and discover that only three years have elapsed since they last set foot in Narnia. Caspian tells of his mission to find seven loyal lords who had been sent away by his evil uncle, Miraz.

A very promising beginning. Fantastic visuals draw the viewer into this magical world of mythological creatures and talking beasts. The CGI is top-notch, and the Dawn Treader itself, a ship in the form of a golden dragon, is magnificently realised. The film sets out full of the wonder of magic and the spirit of adventure characteristic of the Narnian tales and of this story in particular, which is lighter in tone than the previous two novels. There is no evil hanging over Narnia, no enemies to defeat, only glory to be sought and adventure to be had with one’s friends. But here faithfulness to C.S. Lewis’ story ends. The voyagers encounter a man-eating mist to which people are sacrificed and from which Caspian and his crew must now save them.

Quite why the filmmakers felt the need to introduce a completely new dominant element into an already popular story is beyond comprehension. Most likely, they felt that the original story lacked coherence and wanted to give the characters a clearer purpose. If that is so, then they have failed. This mist is never fully explained, and viewers are left without a clear understanding of what the mist is or where it comes from.

The introduction of the mist turns the story from an exciting adventure into the unknown into yet another poorly conceived, clichéd fantasy in which a magical evil power must be destroyed so that freedom can be restored to the people. Did the filmmakers doubt that a voyage of discovery and adventure would be interesting enough to draw the numbers they hoped for? They should have looked to history for their answer. Some of the best known stories are journeys. One has only to call to mind the Odyssey, the Aeneid, The Divine Comedy, Pilgrim’s Progress, Around the World in 80 Days, Huckleberry Finn. And the theme of the quest has been a powerful one in literature throughout human history from the Epic of Gilgamesh to the Legends of King Arthur and the Knights of the Round Table to The Wizard of Oz. So, why, when the journey has such a rich literary pedigree, was it felt necessary to give an added purpose and to effectively turn the film into a story not about the voyage so prominent in the title but about the destination? Has human nature changed so much in the 21st century that we simply cannot enjoy a good yarn? Certainly not!

This and other new intrusions are so clumsily written into the original, well-crafted story that the script stumbles along, awkwardly throwing in baffling elements of the original story which either now do not fit or simply cannot be fully fleshed out due to time constraints.

The film entirely diverges from the tone of the book and its deeper meaning. Where the novel is light-hearted with periods of darkness, the film is very dark indeed, sometimes oppressively so. The mist is used in a curious way. Where in the book people squabble or are tempted to do wrong simply because they are human (and are sometimes prevented through Aslan’s intervention), the mist is now the source of all evil and drives them to temptation, in a way exonerating them of responsibility. They are not tempted because they are weak but because of the mist.

Much of the Christian overtone of the book is lost in this film along with the fun and adventure, a trend already seen in the adaptation of Prince Caspian. Though Aslan’s role in this novel is slightly more distant than in the previous two stories, he figures much less prominently in the film even than he does in the book, again a trend seen already in Prince Caspian. In one important scene in the book, Lucy utters a spell to make the invisible visible, and Aslan appears at her side. He is always with her even if she cannot see him. It is a powerful thought, but one which is completely ignored by the filmmakers, who instead opt for the appearance of Aslan in a confusing dream sequence.

One detail which illustrates both the loss of Christian imagery and also the clumsy and careless integration of the original story into the new script occurs towards the end of the story. During one adventure in the novel and at a time of great fear, Lucy begs Aslan for help. An albatross appears on a beam of light, speaks to Lucy with Aslan’s voice and leads the ship to safety. In the film, the nature of their peril has changed and so, therefore, has the nature of the help required. Lucy prays to Aslan, and the albatross appears briefly, a pointless, baffling detail. And it seems that, after all, no help has come from Aslan.

Opinion may vary on how true a film adaptation should be to the original work, but there is no denying that adaptation is a form of translation, moving from one medium into another. As with languages, direct translation does not always produce the best or most faithful translation, and some interpretation may be necessary to convey the original meaning or tone. Forget copyright laws and budgets. A translator, if he has any integrity, has a responsibility, first and foremost, towards the author of the original work. The primary duty of any translator, whether between languages or media, is to provide a version which expresses as closely as possible the intended message of the original. In this, the film fails utterly.

I will say two small words in the film’s favour, however. The first is Reepicheep. The Chief of the Talking Mice has always been a favourite of mine, and I was pleased by the portrayal of the valiant Mouse in this film. And the second is Eustace. Will Poulter, who plays Eustace Scrubb, is by far the best of the young actors yet seen in these Narnia films, and he may be one to watch out for in the future.

To sum up, if you like fantasy with good CGI, some action and no brains, The Voyage of the Dawn Treader may appeal to you. Otherwise, you would be well advised to take the money you would have spent on the film and buy the book instead. It is far more intelligent and much more exciting.


The Chronicles of Narnia: The Voyage of the Dawn Treader Official Trailer [HD]

Encounters at the End of the World