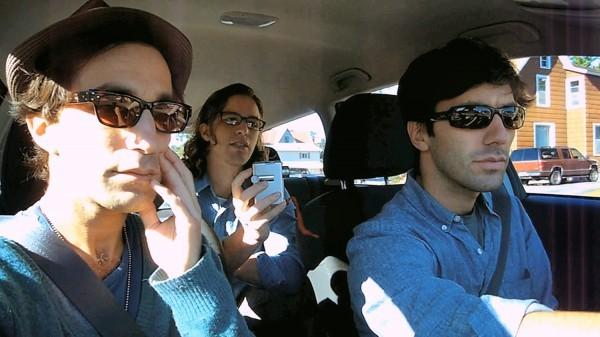 
After the success of The Social Network (aka the Facebook film), it was only a matter of time before filmmakers latched onto what is now perhaps the most influential social tool we have at our disposal and used it to explore what it says about people and society as a whole. Certainly, the idea that Facebook is a unifying tool that helps to build and maintain relationships is an interesting one, and one that Catfish scrutinises throughout. But can a tool that allows you to witness birthday parties, funerals, hangovers and other intimate details of people’s lives really tell you what they are like? Or is it instead like a Venetian mask, a façade that allows people to manipulate their personality or even lie about who they really are?

Catfish makes full use of technology. It introduces us to Nev (pronounced ‘Neev’), a media savvy twenty-something, through the medium of computer programmes. We are taken to the office he shares with his brother, Ariel and Ariel’s co-filmmaker, Henry, via Google earth. We learn very early on that freelance photographer Nev has struck up a Facebook correspondence with a prodigious young painter, Abbey, who used one of his ballet photographs as inspiration for a painting. I can understand suspicions that Catfish was in fact a film warning of the dangers of grown men prowling Facebook for young prodigious painters. But thankfully all tensions are relieved and suspicions laid to rest when we learn that Nev’s sexual preferences are far more traditional and that the friendship between Nev and Abbey is being overseen by Abbey’s mother and her sister, Megan, to whom Nev instantly becomes attracted. He says: ‘She must be pretty awesome at least from Facebook’.

Oh Nev, never was a truer sentence said. Megan dances, plays the guitar and even sends Nev her recordings of cover songs. Nev is seduced by the idea that this young, talented and beautiful woman has also fallen for him.

As the portrait of this modern romance unfolds we learn more about Nev and Megan and their desires to be more intimate with one another, despite the fact that they have never met. However, as their relationship progresses and Nev’s contact with Megan increases, he starts to discover inconsistencies in what he is being told. He realises that the cover songs he is being sent are clips taken from YouTube and learns that the building that Abbey claims to exhibit her pictures in is disused.

For the filmmakers, this twist of fate could not be better timed as they are all planning to fly to Chicago to provide coverage of a ballet convention, and so Nev and co. decided to visit Megan, Abbey and their family in Michigan in order to get to the bottom of things. To say any more would be to ruin the film but perhaps you can already guess what happens. The result of the visit by these three men reveals a lot about the way we connect with one another – or how we think we connect.Of course Nev’s relationship with Megan and her family is intense and the idea that he can share his passions with another human being such a distance away is undoubtedly a powerful one. But so is the idea that it is also dangerous to believe whole-heartedly the reality one is presented with, however believable and attractive it may seem.

The film’s authenticity as a documentary has been called into question and of course, as the film itself reveals, it would be foolish to believe that what we think is ‘real’ is actually ‘real’. The filmmaker, Morgan Spurlock says it is the ‘best fake documentary’ he has ever seen but I think to agree with Spurlock would be a gross act of cynicism. I do not think the film features ‘actors’. Yes, the film is probably edited and stylised, and the narrative probably shaped by the two filmmakers, Ariel and Henry, but that does not seem important. What is important is that it shows us that ‘reality’, whatever that means, is not necessarily what we think it is or want it to be, but something more complex, where people are happy and sad, annoyed, frustrated – sometimes at the same time. To project an idealised version of oneself is perfectly natural but to live by that projection is dangerous and the results, as we see in Catfish, can be damaging.