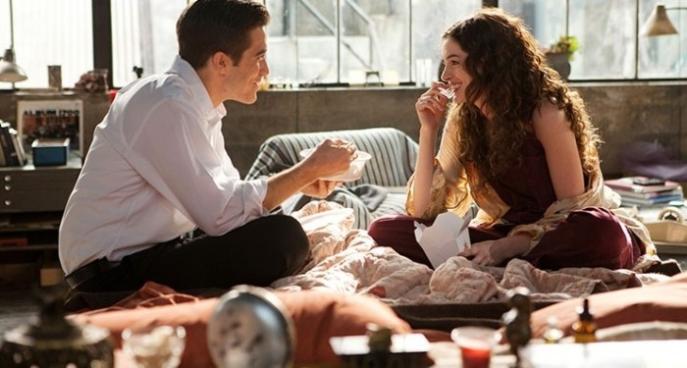 
Based on Jamie Reidy’s (2005) book, The Hard Sell: The Evolution of a Viagra Salesman, this film is a comedy romance drama about a pharmaceutical salesman, Jamie Randall (Jake Gyllenhaal), whose sales take a turn for the better when the sexual performance drug, Viagra, is released onto the market. He works as a drug representative for Pfizer in the late 1990s with Bruce, a veteran salesman (Oliver Platt), and they work the rounds of the hospital staff. Jamie sleeps with nearly every woman he can find. While targeting a well-known physician (Hank Azaria), he meets patient, Maggie Murdock (Anne Hathaway). After a one night stand with her, Jamie, who is a slick ladies’ man from way back, forms a relationship with Maggie.

Maggie is an artist, who is a free spirit and very determined, and she tells Jamie she is only interested in casual sex. True to form, Jamie takes advantage of that fact. The real reason behind Maggie’s actions is that she doesn’t want to complicate her life with any commitments, and she has been bruised in the past. She has early-onset Parkinson’s disease. Her illness produces complications for the relationship, and comedy merges into serious drama when Jamie has to come to grips with the possible outcomes of Maggie’s disease. For different reasons, love and commitment aren’t easy for either of them, and the film tries all the time to balance drama against comic relief. Eventually, Jamie and Maggie decide to make a go of it, and they form a permanent attachment.

This is definitely a film for grown-ups. The censorship classification for the movie fails to communicate that for more than half of the film’s viewing time, either Jamie or Maggie, or both of them, shed their clothes on screen. It is difficult to know whether the film aims to be a sex-teaser, or just wants to show that an intense sexual chemistry exists between the two of them. When the chips are down, the film is about two likeable actors having sex casually, and thrown together they form a complicated attachment that frightens them both. It is not entirely clear why the film’s director (Edward Zwick) decided to sexually titillate the audience for the first half of his movie, at least.

Zwick, who co-wrote the screen play for the movie, makes a welcome attempt to deliver an adult comedy about ethical conflicts in romantic relationships, unprofessional profiteering in the competitive drug world, and the human reluctance to face deep relationships, but the film never quite delivers on any one front. It tries to send the message that this is a relationship where sex overcomes all by leading to genuine love, and it has trouble staying on course. However, the performances by Gyllenhaal and Hathaway are very good. They both capture the nuances of a relationship that is difficult, and there is some good scripting that conveys those nuances subtly. Not surprisingly, hawking Viagra on the market provides the opportunity for some crude humour, and the lack of clothing throughout is clearly intended to help.

This is a film that needed to show much more of the vulnerability lying underneath the façade of its two main characters. The performances are steamy when they should have been dramatic, and the issues the film raises become lost in the complexities of Jamie’s and Maggie’s relationship. The film entertains, but ultimately the result makes for a partially unsatisfying movie that had the potential to be much better than it is.

This review was originally published by the Australian Catholic Office for Film and Broadcasting.