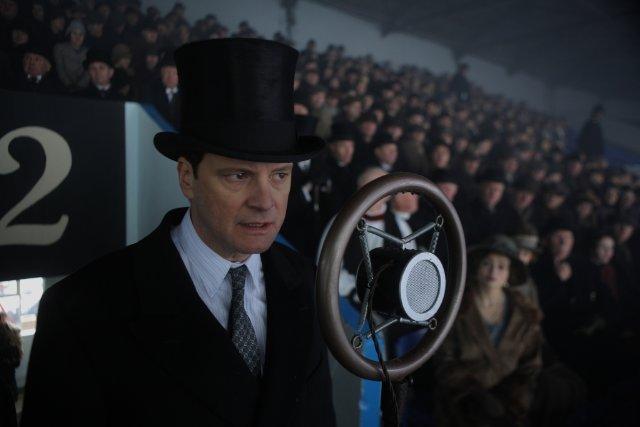 
The King’s Speech begins with preparations for the broadcast of the closing ceremony of the British Empire Exhibition of 1925 at Wembley Stadium. Wireless, we are told, has changed the world. King George V has addressed his subjects in their own homes. They have heard the Prince of Wales, and now they will hear the Duke of York. The duke steps up to the microphone to address the assembled crowd and those listening at home live over the radio. While his apprehension is plain, he is clearly held back by more than stage fright. The wait feels interminable, and when he does speak, it is in fits and starts, his stammers echoing back across the silent stadium, so that we are left wondering whether we are more embarrassed now or before he started speaking. We wish somebody could do it for him but know that no one can.

It is an excellent beginning. We are drawn in immediately, and we are asked to feel – that is, to participate and not merely to observe – from the very beginning. The film is scripted and directed brilliantly with each step carefully calculated. We slip easily into the story as Bertie (later King George VI) learns to cope not only with his speech defect but also with the unaccustomed familiarity of the maverick Australian speech therapist, Lionel Logue. The pace is often necessarily determined by the prince’s stammer, but we learn to wait for what he has to say and are never made to feel as embarrassed as we were in that first scene.

The script deals particularly well with the presentation of its historical subject. It gives plenty of information but respects the intelligence and patience of its viewers. The story is put into context, but we are never lectured. We have enough information to enjoy the story and to understand its significance, but it leaves plenty of room for further research into the finer details.

The calibre of the acting is first-rate. The cast list reads like a veritable Who’s Who of British acting talent. Geoffrey Rush is outstanding as Lionel Logue, the speech therapist who insists on treating the King as an equal and who comes to be considered a member of the royal family. As a commoner, Logue is more familiar to us, and it is through his easy humour and natural dignity that we come to understand the King.

Helena Bonham-Carter is to be commended for her portrayal of Queen Elizabeth. Even with such a fabulous script, the Queen’s character could have come across as too weak or too controlling in the hands of a lesser actor. Here, Queen Elizabeth is the ideal consort. She is a woman with perfect poise and true strength of character. It is through her perseverance that Bertie continues to seek help for his debilitating stammer and eventually discovers Logue. But her role is always one of support. She never seeks to control or overshadow her husband, but through her love and strength she supports him as his wife and queen, never losing her own individuality. And we are reminded that while George VI never expected to be king and never sought it, Queen Elizabeth wanted it even less; but she stands by her husband and shoulders the responsibility with grace and fortitude. When we are constantly bombarded with unrealistic ideas of love and romance, it is refreshing to see the portrayal of a real and model marriage based on mutual love and respect.

Colin Firth is captivating as the stammering prince suddenly and reluctantly thrust into the role of king to one of the greatest nations on earth. He is repressed without being alienating, sympathetic without being soppy. He is entirely human, given to flashes of anger and frequent bouts of self-doubt. Firth inhabits the role so effortlessly, and the entire cast work together so smoothly that we are easily drawn into this world so familiar yet so unlike anything we know, and it takes no effort of our own to suspend disbelief and imagine we are watching the King himself.

Although we are encouraged to identify with Bertie, we are never allowed to forget that he is royalty. Part of the film’s brilliance is that it successfully walks the fine line which allows us access to a king’s humanity without descending into melodrama. It never asks us to feel sorry for him but to recognise him as a fellow human being and to contemplate the challenges he faced. His situation is so far beyond anything most of us are ever likely to know. Many will know what it is like to have a family member marry a person not generally approved of by the rest of the family. But for most of us, this situation results in awkwardness at family events or strained relations; for Bertie it means accession to the throne.

At first sight, this film has much in common with feel-good Hollywood sports films in that we follow a man’s progress as he defeats some obstacle to become a champion, and we are inspired by his courage and determination. But there is a world of difference between The King’s Speech and these films for two reasons. While sporting films depict people pursuing their dreams, but The King’s Speech shows a man who uses his courage and fortitude to live out his duty to the best of his abilities – a powerful message in our modern culture where the self is all-important. Bertie clearly fears the responsibilities about to be thrust upon him, but significantly, it is not he but his brother David (King Edward VIII) who says, ‘Haven’t I any rights?’

The Hollywood feel-good films all end with personal triumph, and, yes, we are invited to share in Bertie’s triumph as he delivers a stirring speech to the British nation as war is declared against Germany on September 3, 1939. But the speech is so much more than a personal triumph. Through his speeches, the King gave hope to the nation. Here was a man with the strength and courage to face his fears and overcome his disability. Here was a King with the strength and courage to lead his nation through darkness.

The King’s Speech is a moving story about human relationships, about fear and about courage. Sensitively filmed, expertly scripted and superbly acted, it comes as close to cinematic perfection as any film has the right to be.

How to read the Gospel of Luke

Why would anyone want to be a Jesuit today? The wisdom and example of Peter Canisius
The renewal of religious life and Fratelli tutti: Reading Fratelli tutti for religious
Finding freedom with St Ignatius
My Own Personal Ignatius
Spiritual and Religious: The Benefits of Being Both