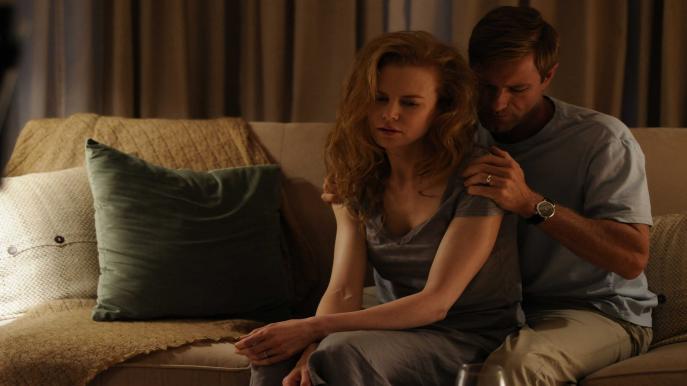 
Dispensing rapidly with both self-help groups and religion as a source of comfort, Rabbit Hole explores the process of grief in intricate detail, as a couple attempt to ‘put their lives back on track’ after the death of their young son. While the various attempts they make – including group therapy, social isolation, family conversations, smoking pot and even flirting with adultery – resolve little, the film does offer hope without simplifying the process of grieving.

Since Rabbit Hole was originally a play, it has a better script than most films: the set pieces, such as the awkward family bowling birthday party or the vicious argument between the grieving parents, are gripping and explore the tension between remembering and acceptance. The early scenes of social awkwardness – the couple retreat into themselves, increasingly unable to communicate their feelings – gradually give way to more violent arguments, as they both apportion and claim the guilt.

The tentative redemption in the closing is based on their mutual willingness to work together, one step at a time and, rather less convincingly, on the Multiple Universe hypothesis. When the wife says that it is comforting to think that, in another dimension, another version of herself is not suffering, this seems a small consolation, an attempt to shoehorn mysticism into a physical hypothesis. Perhaps more importantly, she is introduced to Multiple Universes through a comic book written by the young driver of the car that killed her son. It is this surprising connection that lends the plot some complexity, while emphasising the mother’s re-integration into wider society.

The script’s strength certainly lies in unpicking the complex mesh of recriminations, resentment and guilt that lies beneath the surface anger and depression. When the couple finally burst into argument – over an apparently trivial accident – it reveals the depth of their feelings, as they scramble to accept responsibility for their son’s death. Their unwillingness to blame any third party is noble, as is the husband’s rejection of a potential infidelity, yet it does not allow them to reconcile themselves to the fact of the death. Throughout the film, their solutions become more desperate until they realise that only by taking things slowly can they hope to move through the anguish.

Furthermore, the film is relentlessly honest about the long term effects of mourning. ‘It never goes away,’ explains the grandmother, and the pregnancy of a wayward sister becomes a matter for jealousy. By setting up group therapy and religious responses to suffering as sentimental, it does create a set of straw men arguments, even as it emphasises the loneliness of the couple’s situation.

Nicole Kidman and Aaron Eckhart turn in superb performances as the troubled couple: Eckhart is appropriately stoical, then ferocious; Kidman finds herself trapped in the mundane life of a housewife, unable to reconnect to her past before she became a mother. Her decision to engage with the ‘killer’ of her son is brave and compromised. Her husband may seem to have an easier path – he is busy at work and engages in a mild flirtation with a fellow member of the group therapy sessions – but it is together that they are able to overcome their inertia and pain. Aside from the caricaturing of certain solutions, the film concludes in a moment that suggests that, beneath it all, love provides the only comfort.

Eucharist: The mystery of the daring Creator