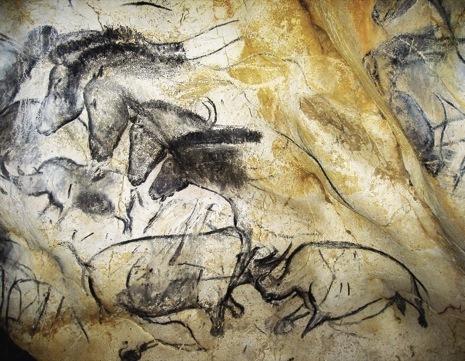 
In December 1994, three French explorers examining the cliffs along the Ardèche River found air vents which they thought might be evidence of an as-yet-undiscovered cave. They found a small gap and descended into a network of chambers covered in scintillating calcite encrustations, but the breathtaking natural beauty was only the first discovery. They soon realised that they were not the cave's first human visitors. Thousands of years ago, before the mouth of the cave collapsed in a landslide, prehistoric man left his mark by covering the walls with paintings of animals, now long extinct. Chauvet cave (named after one of the explorers) is now thought to contain some of the oldest prehistoric paintings yet known to archaeologists – dating back about 30,000 years.

When the cave was discovered, archaeologists already had experience of the destructive effects of visitors on cave paintings at Lascaux (also in France) and at Altamira in Spain. The paintings had been preserved for thousands of years because of the specific environment maintained in the caves, and the introduction of people, with their heat and their breath, disrupted this delicate balance. For this reason, Chauvet cave has never been open to the general public, and only small numbers of scientists and archaeologists have been allowed inside. This film, therefore, shows us a place which we could never hope to visit in person (though there are plans to build a scale replica for visitors), and this film crew were the very first permitted inside the cave. In a way, Werner Herzog is performing a public service by allowing us access to a site which is so important to our understanding of the human past.

Cave of Forgotten Dreams is unusual for a documentary about past peoples and their cultures; it avoids the mistakes common to so many modern archaeological documentaries, which betray a lack of confidence in their subjects. They highlight the most sensational, but not necessarily the most interesting, aspects and bombard audiences with reconstructions and dramatisations. Their first aim is clearly to entertain, but the underlying, and probably unintentional, message is: These people were not like us; they were different and weird and strange, and they're not really even worth your attention.

In Cave of Forgotten Dreams, the cave takes the spotlight, which is right and proper. Much of the film time is taken up in silent contemplation of the paintings with only some background music to add to the atmosphere. The message is clearly: Take your time. This is important. Look at this. Really look.

The cave is a stunning piece of human history, and the human element is a strong aspect of the film. This human focus is a breath of fresh air. Past peoples, especially from prehistory, are often presented to the public as though they were exhibits in a zoo, and even among academic archaeologists, the humanity of their subjects often gets lost amidst numbers, theories and personal ambitions. Cave of Forgotten Dreams reminds us that our interest in prehistoric man lies in his humanity as much as in his mystery. Under Herzog's careful direction, we can't help wondering about these people who left such beautiful pictures. And through their pictures, we feel as though we could almost reach back and touch them, but Herzog is also careful to encourage in us a sense of loss, almost a sorrow, for our inability to know more about the individuals who used the cave so long ago. We can identify the handprints of a single man because of his crooked little finger. We can follow him through the cave and can feel closer to him. There is something particularly moving about hands, whether painted impressions on cave walls or fingerprints in pottery. There is something so utterly personal in them, which also emphasizes the limits of our knowledge. We can see an individual, but what do we know about the person? What were his fears? What were his dreams?

Cave of Forgotten Dreams is no ordinary documentary. It is not a lesson or an argument. It is an experience. Do not go expecting to be stuffed full of minutiae about prehistoric studies. Do hope to leave the cinema with a new-found love for prehistoric man and a greater appreciation for his sophistication, his skill and, above all, his humanity.

An attack of wonder