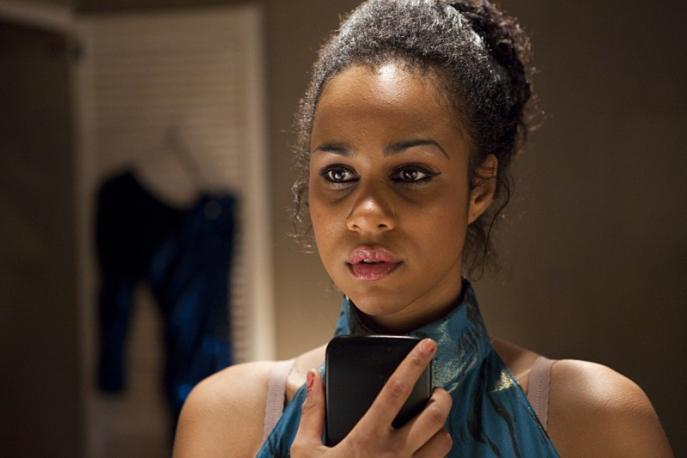 
Carol Morley’s film takes as its starting point a shocking news story from 2006. The body of Joyce Vincent, a forty-year-old woman, was discovered in January of that year in her bedsit in Wood Green, North London, when agents of the Trust that owned the flat came to investigate thousands of pounds of rent arrears. The television was still on and she had been dead over two years. Her body was so badly decomposed that she could only be formally identified when her teeth were compared with a holiday photo. The film begins with the gruesome discovery of her body, partly through reconstruction and partly through the reactions of the faces and voices of those, who, as we gradually learn, had known Joyce over many years. But very quickly the physical horror of the moment (didn’t anyone notice the smell?) gives way to the deeper questions of how a human being, known to so many, can become so invisible that no-one notices when they are no longer there.

The narrative becomes an absorbing detective story, giving us fragments of Joyce’s life through the eyes of those who worked with her and who counted themselves as her friends and lovers as she moved from job to job and home to home across London. The fragments of narrative are transformed into reconstruction, visual and auditory glimpses of times and places, and of a person, that touch a chord but have long since passed. A slow movement across the map of London links the eras of her life and flashes of the board that, in investigative style, begins to put the elements together in logical order and project hypotheses of where next to look.

We are instantly introduced to a vivacious young woman, a head-turner with an air of talent and a bold dress sense (the dress they all remember from the first office party in the eighties is still important towards the end of the film). Yet at the same time there is a sense of mystery. Her co-workers were impressed with her intelligence and ability but one, who had gone out with her for some time, was surprised to discover that she had no O-Levels at all. Everyone knew that she had a real talent with her voice. But then we hear from her partner of later years, who actually worked in the music industry and had given her a chance to record a cover, that no, she didn’t really have the voice. A childhood school friend reports how she used to play at singing into a microphone in the playground and at home. Whatever her actual talent, the desire to perform was real and the film’s soundtrack picks up on the power of song to project a wished-for identity.

We get a hint of childhood traumas as the engaging little girl, her father from Grenada, her mother Indian, learns of her mother’s death only from the laconic statement of her father outside the bedroom door. She is brought up by her sisters but she doesn’t want anything to do with them as an adult, nor they with her. We are shocked to learn that her father died long after she did. Suddenly we actually hear her real voice in a recording – we glimpse her real face in a video, going to meet Mandela. Gradually the vivacious, attractive and teasing presence of the eighties gives way to someone more vulnerable and uncertain, who calls on old friends when she needs somewhere to stay, pleads with an old lover for a chance to go back, as her friends struggle to make sense of what happened to her. The last friend to look after her before she faded from view is horrified when he realises, after she has left, that she had been working as a cleaner. That was not her.

As the film begins the reconstruction of her last hours in the bedsit, we get a hint of deep-lying traumas, perhaps childhood abuse, but certainly later abusive relationships, that lead her to seek refuge in this hostel for battered women. The television is on in the flat and we see projected the faces remembering her, faces that will also represent her remembered life and its dreamed-of possibilities. The tokens of the narrative we have been absorbed in lie around, now a part of her last hours, now a part of the forensic cleanup. We have a hint of the natural causes that may have killed her – a history of asthma, an earlier problem with a gastric ulcer, an infection present on her heel as she takes off her shoes and as she moves towards the place and the position where she will later be found. As she settles down, on the television screen we see Mandela and the sea of faces surging forward to meet him. A face turns to the camera and it is Joyce herself, smiling with delight.

This film captures evocatively a nomadic urban life and gives us glimpses of and insights into a person whose inner self remains strangely invisible. The story is tragic, especially for her friends who are left with the question of what more they might have done. Yet it is not a horror story. The sense of a self-isolation that takes her away from her circle of friends is strangely contradicted by her last activity, wrapping Christmas presents. The voices of her friends, intelligent, insightful and of great integrity edge the tragedy with human hope. We are left with a patient, human reminder of the importance and endurance of affection in spite of our powerlessness and in spite of our failure to do everything for everyone we love.


Dreams of a Life Clip - Searching

The Eucharist and the new creation

God is three and God is one