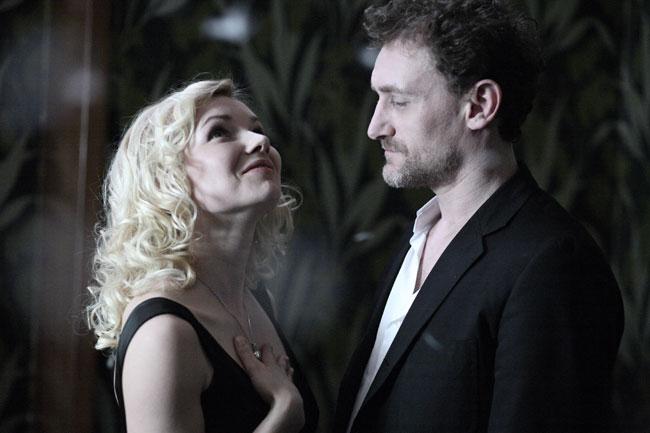 
If you are the kind of person who secretly hopes for something special to happen from time to time, but don’t allow yourself to expect that it will, then this movie is actually for nobody else but you. In fact you are not unlike the male protagonist, David Rousseau, who needs to meet incurable romantic, Candice Lecoeur in order to awaken his own joie de vivre. Did I mention that she is already dead?

Of all the places to find literary inspiration, crime-novelist, David Rousseau stumbles upon his muse in Mouche, a remote town stashed away somewhere in the French Alps. You get the impression that its inhabitants gave up any hope of finding inspiration a long time ago. To make matters worse, the frozen body of local weathergirl and bubblegum beauty, Candice Lecoeur has just been found buried in the snow. An empty bottle of pills in her hand suggests how her light may have been extinguished. But having already broken the mould during her life, Candice’s refusal to be ruled by convention continues beyond the grave. When David Rousseau meets his muse, stretched out in the morgue, he is somehow seduced by her. She beckons him to explore not only the strange circumstances of her premature death, but also the mystery of her lingering life.

I have to admit that at this point I’m wondering if the film will turn out to be a Gallic hybrid of Ghost and The X-Files. The remoteness of the location is reminiscent of the kind of backwater where Mulder and Scully would unearth some freakish phenomenon that would better remain hidden. Thankfully the theme of the afterlife is handled in a respectful manner that doesn’t resort to shimmering figures that hover around the action. Candice’s abiding presence remains elusive enough to save the viewer from having to completely suspend belief in the realism of the scenario. And in defence of the outstanding Jean-Paul Rouve (David Rousseau) you can’t accuse him of over indulging in amorous melodrama à la Patrick Swayze. Yes, Nobody Else But You initially comes across as a dalliance with the paranormal, or at least pushes the boundaries of conventional human relations. Thankfully the film keeps its feet on the ground, and refocuses on and finds richness in the human element of the story.

After initially being stonewalled by the local police, a young officer breaks ranks and assists David in his efforts to dig deeper. We become privy to the intimate details of Candice’s story as David wades through the catalogue of her personal diaries. Entry point is at the age of 13 when it dawns on Martine Langevin that attracting the attention of boys provides welcome respite from her insult-spewing peers. Skipping forward we find Martine languishing in the insignificance of her job as a petrol pump assistant. However, a serendipitous meeting with a passing photographer who has an eye for modelling talent flings the doors of possibility wide open. Every cute pinup girl needs a cute pinup name. Martine Langevin is brushed aside, paving the way for Candice Lecoeur to step into the limelight. Candice is a natural at giving the camera what it wants, and in exchange, she gets the only thing she ever wanted: the chance to be somebody else.

The style is neo-noir comedy served up as a whodunnit, or should I say who-is-it, since the film is about discovering who Candice really is as much as uncovering the identity of her killer. The darker shades of her life steadily emerge creating a personal narrative eerily analogous to that of Marilyn Monroe. Just as she oscillates between anguish and effervescence, Nobody Else But You also permits itself to indulge in cinematic caprice. Hats off to the peripheral characters whose endearing idiosyncrasies rebuff effortlessly the creeping shadow. The pronounced, stereotypical insolence of Commandant Colbert (who you may recognise as Christophe from Of Gods and Men) is a tonic. The same goes for the thinly-veiled advances of both the wannabe temptress hotel receptionist and the young police officer, whose hopes are repeatedly dashed by deadpan David. The light brushstrokes of humour provide the sustenance required to stay engaged and go the distance with some challenging themes that the film ultimately wants to explore.

Comedy doesn’t represent the only source of consolation in Nobody Else but You.There is something inside David and Candice that refuses to give up. They both sense that there has always been somebody out there worth finding and no matter what disappointments and obstacles they come up against, both persist in that search. The sardonic essence of this noir comedy is that two people who have finally found each other are pressed up against the boundary that separates this world from the next; agonisingly close and yet incapable of going further. Paradoxically, it is the depth of the connection between them that disobeys convention and points towards the nature of true encounter at the level of the human heart.

The great achievement of director Gérald Hustache-Mathieu is that amidst the rancour and despair, he manages to preserve a few glowing embers of hope that ultimately outshine everything else and, like Candice, refuse to be extinguished. At a moment of awakening, she realises that being the person she had always dreamed of being had left her with the agonising ache of self-estrangement. In a climactic conclusion, she finally ends her self-imposed exile from her sacred homeland and reclaims the right to be herself. The meeting of two searching hearts reminds us reassuringly that there is somebody out there worth finding, but when the real Candice Lecoeur emerges, she testifies emphatically to the immeasurable value of finding the person who is hiding inside.

The Eucharist and the new creation

God is three and God is one