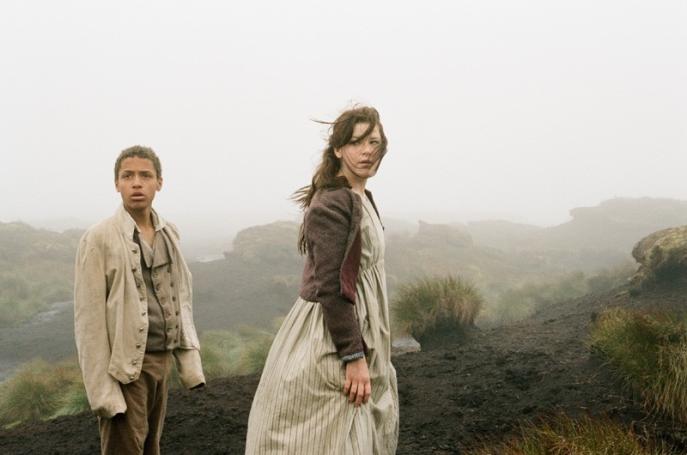 
Andrea Arnold’s Wuthering Heights captures well the prevailing tone of Emily Brontё’s novel. The film is unsettling and dark (as is the screen for a lot of the time, making it a taxing and frustrating watch), devoid of all of the frills and niceties that we have come to expect of a period film. Her Yorkshire Moors, the integral cradle in which the entire story takes place, are bleak – the ferocity of the weather, the vastness of the space, the lack of community are all hard-hitting. However, devoid of soundtrack (aside from the Mumford & Sons track that plays over the closing credits – not quite as jarring as you would imagine, in fact) and with unsteady camerawork throughout, the film has an almost docu-drama presentation. Arnold’s previous film, Fish Tank, was praised for its grit and its head-on confrontation with estate life; she has given Wuthering Heights the same treatment, but this time it doesn’t work. The same approach that imbued Fish Tank with its authenticity imposes on this notorious love story a crassness that is both irritating and unnecessary.

The young actors who tell us the story of Heathcliff and Cathy’s childhood do an admirable job but in over an hour on screen the young Heathcliff says barely twenty words – and half of those are swear words. He curses and is cursed at by Cathy’s brother, Hindley Earnshaw, who in turn unleashes a torrent of bad language on the rest of the household. Little of Bronte’s dialogue is kept elsewhere, but this language in particular creates a grating juxtaposition with what would otherwise have been an appropriate staging for the story. Such reformulation is part of Arnold’s intention and not just in this respect. Much has been made of her decision to cast a black actor to play Heathcliff, but this does no more than generate the occasional shout of ‘n****r’ in place of the more textual ‘gypsy’ (although this is also prolific). The actor in question, James Howson, has neither the presence nor the roguishness of previous Heathcliffs, but he and Kaya Scodelario as Cathy have a good chemistry – more so when they are wordless, though, than when their interaction is shaped by conversation.

The temptation to reduce Heathcliff and Cathy’s journey from an epic of obsession and revenge to a bittersweet romance is well and truly – and rightly – avoided. There’s barely a hint of flirtation between them to lighten the mood and the brutality of their rural surroundings creates a whirlpool of aggression around them which bursts any bubble of lightness they might temporarily find themselves in. The momentum of the story ought to be sustained by Heathcliff and Cathy’s indomitable passion for one another: they don’t so much fall in love, but they belong to one another. The novel propounds this connection forcefully without ever having to explain it; the film, however, takes it for granted. It sets up a childhood attachment between the two, born more out of the absence of other company than out of belonging, but not enough is done to establish their need of one another. In diverting them away from a romantic path, the film goes too far and removes the dynamic of their partnership. It’s not so much a failing of characterisation – it isn’t as if Cathy is supposed to be drawn to Heathcliff for his charm or suave, or Heathcliff to Cathy for her kindness – but more a result of a mistaken assumption that the absorption of the film’s dark ambience into their relationship will be sufficient to create the torment that defines it. Cathy’s admission of her yearning for Heathcliff still provides the turning point of the story, but much of its original content is removed. In fairness, Cathy’s expression of her ardour as it is in the novel: ‘He’s always, always in my mind: not as a pleasure, any more than I am always a pleasure to myself, but as my own being’, would have seemed out of place in the context created by the film– but that just epitomises how the film gets their relationship wrong. It’s a wasted opportunity to explore the essence of a relationship that remains chaste in spite of its strength of passion.

What else is missing? The second half of the story, among other things. The action concludes with Cathy’s death and so the dimensions to Heathcliff’s character that we might have been able to discover through his treatment of the next generation are lost. In fact, the fate of the child we know Cathy to be carrying is never mentioned. The presence of Nellie Dean, too, a source of authority, compassion and not to mention narrative, is sadly lacking, as she is reduced to little more than an extra. A note of praise though – the role of the Lintons is spot on, in terms of the quality and quantity of their time on screen. Edgar is suitably weak yet enamoured with Cathy to be simultaneously sidelined by and pushed to breaking point by Heathcliff; Isabella’s curiosity brings her into the action but she is then no more than a stepping stone for Heathcliff.

This attempt at reinvention has struck all the wrong chords. The pair walking behind me as we were leaving the cinema seemed more impressed than I was, but then again their conversation did include the exchange: ‘I don’t think the book ended like that, did it?’ ‘No – did she even die in the book?’ Clearly not that au fait with the Brontё version, then, and less concerned than I with how the film fits within the parameters set by its source material. This is an explicit attempt at Wuthering Heights for the Skins generation, but that generation ought to be insulted by the suggestion that they can better understand a string of swear words than a narrative infused with fervour and desire.

A Reflection on Jesus’s Leadership

Science and Religion: Are they compatible?