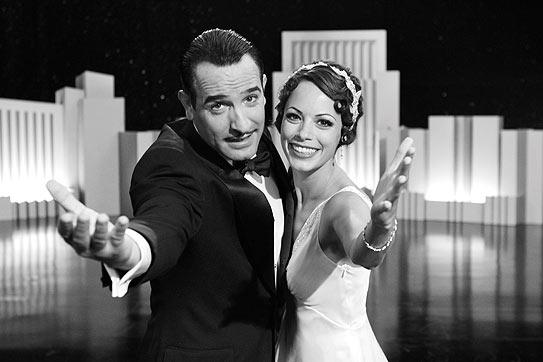 
An American writer once wrote, ‘The trouble with America is that there are far too many wide open spaces surrounded by teeth.’ If there is one thing you will remember from watching Michael Hazanavicius’ film The Artist, it is teeth. And lots of them. The charm and guile of this quirky but engaging silent movie is to make you smile. If the absence of dialogue has to be filled with something, then let it be smiles. Recently at the Golden Globes it won the awards for Best Motion Picture – Musical or Comedy, Best Original Score and Best Actor – Motion Picture Musical or Comedy. Again, it was smiles all round.

The Artist is a French movie about the movies. It honours and prods us with its spats-covered shoes to remember how films used to be made before we embraced the digital and 3D revolution. It is presented entirely in black and white and Hazanavicius is to be congratulated for the extent of attention to detail he went to. It was made in the 1.33:1 screen ratio used in the 1920s. The lighting, the movement, the occasional inter-title cards all hark back to an era when the cinema was the centre of mass entertainment; where cinemas were packed and everyone had a good time.

Hazanavicius was a brave man to go to distributers Warner Bros and the Weinstein Company and say, ‘I have an idea that I think you might like.’ What is extraordinary about the film is that it is so simple in its tale and you are left like Buster Keaton standing in the gaping doorway as the side of the house falls down around you onto the Californian dust. You remain untouched but something important has happened around you.

The Artist takes place in Hollywood between 1927 and 1932. It tells the tale of a silent movie star, George Valentin (Jean Dujardin), whose fame and popularity is in decline due to his inability to embrace change or recognise that time waits for no man. In fact, time waits and embraces a glamorous Peppy Miller (Berenice Bejo). They meet outside the premiere of his latest film A Russian Affair. Whilst posing for photographs for the press, Peppy Miller bends down to pick up her dropped purse and is accidently pushed into Valentin. The rest, as they say, is pure Hollywood. She is photographed and is placed on the front page of Variety with the headline ‘Who’s that Girl?’ She is later recognised by Valentin and offered the part of a dancer in one of his movies. As his star begins to dwindle, hers is in ascendance. The stories of two people intertwined through love illustrate contrasting fortunes.

Al Zimmer (John Goodman), the studio boss with cigar to match, is initially not happy with Miller, but he realises that she has the talent and popularity to be made into a star of the new sound movies. Valentin does not believe that sound will catch on, and decides to fund his own movie ‘Tears of Love’. But it is released at the same time as Miller’s ‘Beauty Spot’; He is ruined as his film is ignored and her film receives all the acclaim.

The dressing room plays a key part in the film. Hazanavicius makes references to so many films throughout this movie and none more so than the De Niro scene in Raging Bull reciting Brando in On the Waterfront. The line ‘I could have been a contender’ springs to mind when Valentin confronts the fact he cannot make the move to sound. He drops his whisky glass on the dressing table and for the first time sound rings out. You hear the glass hit the table, a phone rings, the dog barks. We hear it all, but still he mouths the words and we cannot hear; nor can he hear himself much to his frustration. It is a powerful moment and beautifully filmed.

Miller (Berenice Bejo) in real life is Hazanavicius’ wife who had starred in his OSS spy films. She carries the movie along very well and although Valentin (Dujardin) will gain many a plaudit you do feel reminded of the hard hitting comment by Ginger Rogers regarding her observation that she did everything Fred Astaire did, but in high heels and backwards. Bejo would have been a star of the silent screen and deserves more praise than she is currently getting. However, she has been nominated for a few awards along with her co-star Uggie the dog who puts in a show stealing performance.

The film is about kindness and loyalty. As the viewer you are comfortable in your knowledge of what is happening, but it asks questions of ourselves as to what and how we see change coming in our own lives. What is it that blinds us to the change that is around us and how do we truly accept the kindness that is shown to us?

The Artist is a gift to the critics and reminds them of why they like movies in the first place. The Valentin character could easily have been put together in celluloid from the work of Rudolph Valentino, the 20s movie icon who tragically died at 31, and Harold Lloyd the genius of suspense and danger who was one of the most influential characters of the silent era. Film buffs, this film is for you. For those of you who need a good dialogue, a twist and special effects that make you drop your coffee and large box of popcorn then slip quietly into the screen next door.

Rudolph Valentino famously said, ‘Women are not in love with me but with the picture of me on the screen. I am merely the canvas upon which women paint their dreams.’ The reflections of a true Artist. The final scene is wonderful and worth the wait. Valentin says his only line in the film in sound. You need to see it for yourself to know what it is, but the pleasure is all yours.

The Holy See and the State of Palestine