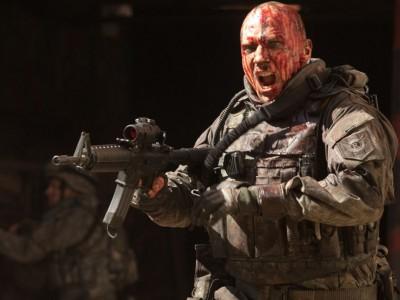 
Coriolanus has long been one of Shakespeare’s lesser-known plays, the poorer sibling to the other Roman plays. This is partly because of its tight focus: it’s an extended character study of a war hero re-encountering the city for which he has fought, the shifting opinions of the people first electing him Consul and then banishing him. Ralph Fiennes’ film version is an intelligently adapted version that keeps the original text, edited sensitively, and places the tragedy in a contemporary European setting.

It is also the most politically-savvy of the plays, even more so than Julius Caesar or King Lear. Caius Martius (later named Coriolanus in recognition of his heroics at the city of Coriole) begins the film as the all-action soldier, exhibiting the same courage in facing up to the Roman crowds demanding bread, or leading the assault against the Volscian enemies who threaten the city. He is not equipped for peace. His enemies manipulate public opinion and place him in positions where they know he will not be able to perform the political games necessary for success; instead he reacts in the way that he knows best, allowing his rage full reign across his will. He turns on his own people, becoming the traitor that they labelled him, allying with the enemies and leading them to Rome.

The modern setting works excellently. The opening shots of protestors leading the charge against riot police, flanked by cameramen and mobile phones, could have come from many a news bulletin in the past year. And the ambiguous south-eastern European setting (a ‘city calling itself Rome’) could be Athens, the shortage of grain that takes the people out onto the streets suggesting the cuts and needs in cities across Europe. Coriolanus is surrounded by television cameras: recording his speeches, replaying them into the homes of the people, focussing in on his scowls of distaste as he is asked to parade in front of an audience and ask their blessing to become Consul. Fiennes makes great use of close-up shots, the sweat at the back of his neck or the spittle flung out in wrath as the people turn against him.

Around Coriolanus gather a group of suitors who attempt to bring him to peace: his friend Menenius, his wife and child, and ultimately his mother. It’s of great credit to the film that it manages to hold our attention even during the supplication scenes, which are really just set-pieces of rhetoric. Vanessa Redgrave stands out as Coriolanus’ mother: the relationship on screen between her and Fiennes crackles far more than most ‘romantic’ partnerships.

The only weak link in the casting is the cameo of Jon Snow as a TV news anchorman. A small part, but it disrupts the unity of the film: we know Snow too well, and this city, wherever it is, is not London. The political system, so central to the workings of the play, is not British – and it is worth remembering that ancient Rome was as exotic a place for Shakespeare’s audience as it is for us now. The threat of dictatorship is the context to the people’s fear of Coriolanus. The crowd are easily manipulated by their tribunes (James Nesbitt and Paul Jesson both starring as the cynical political operators) in a way that it is hard to believe a modern day crowd of protesters would allow themselves to be. What jars the most is that this is not a film that celebrates democracy – the mob is fickle, ungrateful and cowardly. The closest parallel to the UK would be the trial-by-media that politicians face: Gordon Brown is the closest we have to a recent Coriolanus, his downfall encapsulated in that private complaint in a car in Rochdale in 2010 about that ‘bigoted woman’.

But I’m writing this review not from the relatively sedate UK, but from a country that has recently emerged from a long-running civil war, and where the general who led the government forces to victory has been jailed on charges of treason following his attempt to enter politics. From here Coriolanus looks depressingly prescient, the political posturing not a relic from an ancient civilisation but a performance repeated on a daily basis. Some politicians here display the same belief in their own superiority that leads Coriolanus to his tragic end – a disregard for the people they represent and serve. What makes Coriolanus different from his contemporary counterparts is his very un-modern honesty in voicing his true feelings.

This is the central moral question that we are posed. Coriolanus refuses to pander to the crowds: he will speak only what he feels. He is urged by his friends and family to give the people what they want, but he sees any form of diplomacy as untruth – ‘such words that are but rooted in / Your tongue, though but bastards and syllables / Of no allowance to your bosom's truth’. But this integrity is not rooted in any form of love. The insults he levels at the crowd are among the juiciest of all of Shakespeare’s insults, the ‘mutable rank-scented many’ on the receiving end of a barrage of abuse. It’s not humility or modesty that prevents him from displaying his wounds and offering himself up to receive the praise and approval of the people, it’s a solid pride that has hardened his veins. As Dr. Anna Abram has written in her discussion of the sin of pride in The Talented Mr. Ripley, Coriolanus does not see humans in the faces that throng before him: he sees objects that are so beneath him that he does not need their affection. Coriolanus teaches us that sins as big as pride can beget the appearance of virtue in their wake: in this case, Coriolanus’ honesty is a product of his all-consuming arrogance.