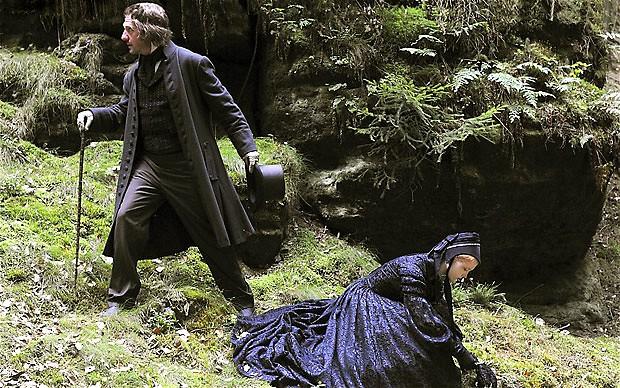 
The nature of evil and our attitudes to it have been the themes of a number of these reviews: I don't know whether it is an obsession of this reviewer, or of my Jesuit masters, or a consequence of a formative experience with Ignatian spirituality. Nonetheless, in the course of the four years of writing for Thinking Faith, I have been sent to review studies of evil as a relentless, driving force (in No Country for Old Men), as a Manichaean presence in the world (one reading of There Will be Blood) or in the shape of diabolical political control in Il Divo and Enemies of the People. Satan himself, played memorably by Tom Waits, had a key part to play in Terry Guilliam's The Imaginarium of Dr Parnassus. There has also been a Brazilian film about cannibalism.

Any film of the Faust legend – the academic who sells his soul to Satan for a mortal lifetime of power and knowledge – is explicitly about a relationship with the devil, and like Tolstoy’s unhappy families, every relationship with evil is evil in its own way. In some versions, Faust actively conjures Mephistopheles with books, candles and witchcraft; Goethe’s Mephistopheles takes the form of a stray dog; in this adaptation, Faust simply ‘comes to Satan’s attention’, and this representation of the relationship implies a different understanding of the nature of sin.

The world in which Sokurov places Faust is one of want, disease, ignorance, endemic conflict and evil, one in which poverty and violence are shown to grind the lives of the poor. His Satan wanders leisurely through this environment, casting a detached eye over the diseased, the hungry, the drunken soldiery and their wars. His chosen Devil is less a general of a legion of demons than the sullen Lucifer of the book of Job – the Prince of Darkness who just spends his time ‘wandering about’. In all this there is no apparent causality between the presence of a devil and human suffering, but a clear correlation: here is violence, here is poverty, here is evil. It is, as Captain Vere sings in Billy Budd, as if ‘the Devil has something to do with every human consignment to this planet of earth.’

This subtlety is made memorable by the striking visual quality of the film. Cinematographer Bruno Delbonnel shot Faust using an aspect ratio which nods towards the look of early cinema, as do some of the costumes and prosthetics (the look of Sokurov’s Mephistopheles seems to channel other monsters from the 1920s). This apparent historicism is blended with a use of a highly mobile camera, digital animation and hyper-real set-dressing to create a dark, magic-realist vision of early nineteenth century Europe, the kind of world we might imagine Goethe had in mind.

There is no question, I think, that this version of Faust is unlike anything else you are likely to see in the cinema this year, and that clarity of vision is no doubt one of the reasons the Venice judges awarded the film the Golden Lion last year. However, it is long and the pace will be very slow for some viewers. I note that before the award of the Golden Lion at Venice a number of critics were prepared to say that this film is ‘ponderous’. It certainly takes its time at 2 hours and 20 minutes, and this lugubrious quality is probably a key reason why it has only been exhibited at one or two fringe venues in England – hence this review on its release on DVD. Cinema-goers in austerity Britain appear unwilling to spend the time reflecting on the nature of evil – or unwilling to spend 140 minutes doing so.

The length of the film also provides for a slow turn of the screw and I think this is rather the point. Faust’s seduction of Margarete provides the focus to the narrative and is a process which slowly consumes most of the film. One effect of this is an objectification of her in the viewers’ eyes; she ceases to be a person (or a representation of a person) and is reduced to a goal; she becomes a means reduced to an end (if only an end to the film). Sokurov emphasises this reduction of the whole woman to her sexual rôle in the seduction scene, where Faust’s consummation of his desires is conveyed through a lingering medium close-up of Margarete’s lower torso, apparently referencing Manet’s ‘The Origin of the World’: featureless, with her face off-camera, she is a human being reduced to a function, or to her rôle as an object of someone else’s desires. In this process, of course, the viewer is drawn into complicity with Faust, a complicity which is intensified if that viewer ever shared a desire with Faust to see Margarete naked.

I suspect it is that clever blurring of identities between the viewer and Faust that is the lasting insight of this version of the legend, and the reason why Sokurov chose it to complete his cycle of studies of ambition and evil. (The others are Moloch [1999] about Adolf Hitler, Taurus [2000] about Lenin and The Sun [2005] focusing on Emperor Hirohito.) After all, no adequate investigation of evil can be satisfied with celebrating the darkness of others without being prepared to consider the shadows inside ourselves.

Visit the IMDb page for this film

Let the Right One In