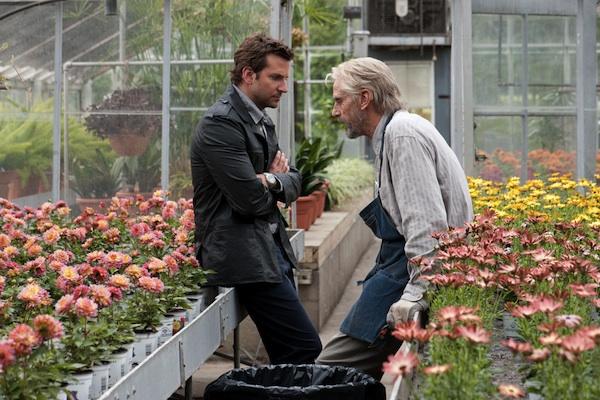 
A talented young writer is struggling to break into the market and prove his worth to his wife, his friends and his family, but most importantly to himself. One day, he finds an old typewritten manuscript with a beautifully written story which he promptly claims for his own and publishes to great acclaim. Life is glorious, and he has even learned to accept the stolen praise, until an old man comes to visit. And the twist? This is all a novel written by another man – or is he?

The first scene of the plagiarism story within the story shows the writer, Rory, on his way to an awards ceremony with his wife while an old man watches them leave the hotel. And in case we might not notice the old man or suspect his significance, the voiceover from Clayton, the author of the story, alerts us to his presence. It is a bumbling beginning which betrays the story before it has even begun. It is likely that most of the audience will be aware of a plagiarism element to the story. So from nearly the first scene of the film, we know that Rory will achieve great success on the back of his crime. We also know that the old man will be revealed as the real author of the lauded novel. And the presence of a narrator, the author of Rory’s story, only makes sense if we are to suspect that the tale of Rory’s plagiarism is in fact part of an autobiographical novel. So surely there is something left for us to discover, Rory’s comeuppance perhaps. Not a bit of it. The film bumbles along for 96 minutes, revealing nothing of significance which could not have been inferred from the opening scenes. The Words is yet another film with the germ of a good idea which falls flat on its face due to a poor script.

The script is not completely without merit; there are good elements in it, and it could have been improved with some heavy editing and rewriting. The superfluous narrator is irritating and detracts from the story by explaining too much, and the story mostly drags, hobbled by irrelevant details and poor pacing. However, some of the early scenes are insightful and may strike a chord with some viewers. Rory’s struggle to realise his dream and his fear that he may not be the person he thought he was, may never be able to achieve his goals, should be recognisable to many, as will the pressures of the outside world. Rory might be content with his workaday existence except that he sees and covets the lives that other people lead. And there is a very recognisable father-son relationship. The father loves his son and wants to help him but also wants him to take responsibility for himself, while the son is desperate to follow his dream, a dream which he feels his father does not understand.

It is strange then that this setup of disillusionment and the pressures of life lead to nothing. There is no direct correlation between the pressures of life and Rory’s transgression. The narrator tells us that Rory does not know why he is doing what he does when he copies out the manuscript, perhaps just to feel what it is like to write such a thing. This excuse is unconvincing and deflates the tension (poorly constructed as it is) related to Rory’s struggle. Perhaps the writers are trying to be subtle, and this is really Clayton’s lack of self-awareness and his unwillingness to face his own faults. But then why did he write the book? This is no expiation. He is like a child to whom one might say, ‘Now say you’re sorry, and mean it this time.’

Or perhaps I am giving the writers too much credit. Clayton himself says that the point of the story is to show that a person can make a mistake (though he would more rightly have said ‘commit a crime’) without it having any long-term negative influence on his life. This is, of course, a very worldly perspective. The world never discovers his crime, so Rory lives his dream of being a writer and continues to be rich and successful. A positive outcome in the eyes of the world. But one cannot practise deceit, cannot profit at the expense of others without hurting both oneself and others. In building his career on the back of a crime, Rory practises deceit every day of his life, for the plagiarism is not a mistake made once in his youth but a deceit reconfirmed every day that he continues to profit from it, and the longer he remains unrepentant and continues in his lie, the easier and more natural will he find deceit and other vices, and the more he will corrupt his soul. Rory always wanted to be a successful writer, but should he not have had a greater desire to be a good man, an honest man?

It is a shame that the writers have made such a hash of their story within a story within a story (for we also have the old man’s history in tedious detail). The first purpose of any film is to entertain and to tell a good story. If the characters are shallow and the plot has no substance, then the film has lost its purpose. Stories of whatever genre in whatever medium entertain and move us by holding up a mirror in which we can see a reflection of ourselves and our own lives. And in this way, they also have the power to edify and instruct. Plagiarism is a very serious and very common problem in our world today. More than ever before, information and ideas are easily available, and the pressure to appear successful at school and in the workplace tempts many people to steal work from books, from the internet, from friends and colleagues. And especially in professions where people sell words and ideas, plagiarism can have ruinous effects on the lives of its victims. So to create a film about plagiarism which shows it as a simple error in judgement having no consequences except the occasional pang on the part of the perpetrator is not only unfortunate, it is irresponsible.

The Words is an unsuccessful film which starts with a good idea but fails to deliver. It becomes so preoccupied with its own cleverness that it fails at the most basic level just to tell a good story.