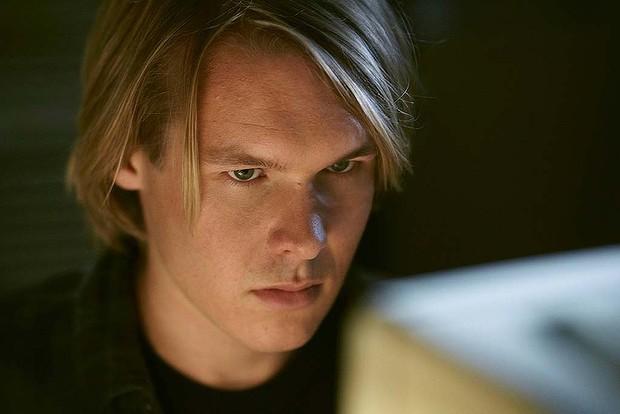 
Underground: The Julian Assange Story is likely to attract attention because its main character (played by Alex Williams) is someone who has been in the news a lot himself recently. But beneath any headlines it might grab, it is a moving story about a young man and the people around him as he grows up. His mother (Rachel Griffiths) is one of the strong influences on him thanks to her care for him through the difficult circumstances of his childhood, but also because she challenges him to use his considerable talents to make the world a better place. His relationships with Electra (Laura Wheelwright) and his baby son show him to be a caring and loyal person, but the strength of his devotion to them also serves to demonstrate that when his other passion grabs him, the family are in danger of being left behind.

This passion is two-fold: hacking into computers with two friends, and a desire to uncover and publish the truth about injustices, the former becoming the means through which he attempts to do the latter. His personality, childhood experience and involvement in anti-nuclear protests, as well as global events such as the fall of the Berlin Wall, are all shown to be factors in the growth of a desire for justice and a sense of activism in Julian Assange.

A lot of effort was put into ensuring that authentic technology from the period was used, which will delight those with memories of personal computers in the late 1980s and early 90s; a large mobile phone seems particularly quaint. The proficiency of the young Assange at using this technology to hack into US military computers brings another key character onto the scene. Anthony LaPaglia delivers a good performance as Detective Ken Roberts, a policeman tasked with catching the hackers after some of their contemporaries were arrested for collecting and using credit card details from a bank. Several comic scenes involve the contrast between technologically-illiterate Roberts and the precocious hackers who run rings around him. In this sense, Assange is the Goliath to Roberts’ David. But the roles are reversed when you consider that, whereas the hackers were using relatively small computers with parts bought at a second-hand computer fair and bits from a dismantled payphone, Roberts has the help of a young, technology-savvy assistant (Benedict Samuel) and several policemen, surveillance tools, the telephone exchange, state-of-the-art equipment and money to come up with whatever device will help them. Roberts knows how to catch people, and after his initial, technological confusion he turns things to his own advantage and eventually begins to dictate the terms of engagement.

The more Assange finds in the military computers, the more his motivation moves from the hacker’s thrill to the activist’s desire to reveal more of the truth about the impending war in Kuwait/Iraq. The police come across as people trying to do their jobs and do the right thing: they are committed to the principle that even though the hackers have not taken or damaged anything, they are still ‘breaking and entering’. The notion of property is a major theme explored by the film and it caused me to think about the challenge that the Christian idea of the universal destination of goods presents to a capitalist economy (see Gaudium et Spes §69). During a couple of scenes when we look into Roberts’ face as he thinks about the case, the question I was asking myself was whether following the law is sometimes allowing greater injustice to be committed. When civilians begin to be killed in Operation Desert Storm, the question comes into even sharper focus.

Underground is an entertaining film that moves along at a good pace with some interesting and challenging themes, but it remains a human story with some laughs. This makes it suitable to watch for entertainment, to find out more about Assange or WikiLeaks from a different perspective, or as a commentary on world affairs. Much of the story comes from the book Underground: Tales of Hacking, Madness and Obsession on the Electronic Frontier but people and events have been changed to tell the story in the medium of film, to explore some of the issues further, and to relate events in the story to subsequent events. The main character followed his desire to uncover and publish the truth, and it has resulted in him being holed up in an embassy down the road from my university. There is the personal dimension of this man’s life, but the film reminds me that there are other issues at stake in his story, both about how people are being treated around the world and the ways in which international relations are conducted. These questions have been and will continue to be with me in prayer – what are the answers to these questions in the kingdom of God? What is God asking me to do so that I am with Jesus rather than against Him, gathering with Him and not scattering (Luke 11:23)?

Beatitudes on Film: Being the ‘bigger’ person

Of Gods And Men