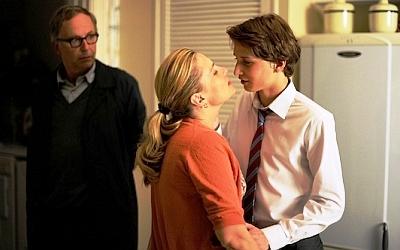 
Germain (Fabrice Lucini) has been teaching literature and creative writing for years in a suburban French lycée. You can tell he’s been doing it for years because of his slight paunch, his ill-fitting dentures and his cynical attitude to his pupils’ work. The essays are always the same, a bland melange of the obvious, the banal and the irrelevant, sentences linked (if at all) with simple conjunctions, and none of what the British exam boards call ‘flair’. Mind you, many would struggle to respond with panache to the dull tasks he sets. Inevitably, he is an unsuccessful writer himself; less inevitably, he is married to Kristin Scott Thomas (no doubt some consolation for worldly failure).

This particular autumn, things suddenly change: there is a boy (Claude Garcia, played by Ernst Umhauer) sitting on the back row of his class whose writing catches the teacher’s interest. In response to the unremarkable task ‘What I did last weekend’, most of the young people rattle off simplistic reportage. The boy on the back row, however, produces a spooky two-page essay that has both Germain and his stylish wife hooked. It goes something like this: ‘last week-end I tricked my way into the home of one of my classmates. I chose Rapha because of his utter normality (and maybe also for his effortless masculinity). Theirs is an ordinary suburban home, quite unlike the one I come from; they eat pizza and watch sport on the television; father and son bond over basketball; the wife and mother is bored and frustrated. She is an attractive woman. To be continued...’

This simple question opens up the central knot of the plot: how are stories to be continued? How do writers and readers respond to the possibilities offered by plots, narrative and character? And how do we respond to the ethical problem that arises when our readership might be interpreted as approval of the events we are reading about?

Germain, like any good teacher, responds to Claude’s enthusiasm with challenge, support, dialogue, and critique. But as the film develops, it is his motivation that becomes the subject of the drama itself: why is he spending so much energy on this lad’s work? Is it simply to encourage a good pupil, as all teachers should? Or is it a substitute and projection of his own frustrated creativity? Or is it because he too used to sit on the back row, and he sees something of himself in Claude? Or is it because Claude fills the void that should have been occupied by his own children? Or is it motivated by desire for Claude? Or a bizarre proxy desire for Claude to consummate his barely hidden lust for the older woman, his friend’s mother? Or a voyeuristic desire to expose the insides of Rapha’s family and his parents’ intimacies? And are all of these possibilities really why we read novels and go to the cinema?

This being cinema, we don’t just read Claude’s version of events, we see it unfold: we watch him sitting with this other family, eating take-away pizza, being welcomed as their son’s best friend. And then, after the Prof has slashed a draft with his blue pencil, we see the re-writes enacted. Which of course poses the question, what was it that you were shown in the first place? Was that what ‘really’ happened, or just a fantasy, or a fantasy within a fantasy (since this is all fiction, anyway)?

Some of the wit in this piece is generated by a complex game around questions of literary and cinematic form (Who is the writer? Who is the reader? What is narrative? Is reading a creative process? How does first-person story-telling change our understanding of narration?) These are long-standing and productive questions for writers and film-makers. What is maybe a new idea in contemporary cinema is the explicit interest in the psychodynamic relationship between teachers and their pupils (and vice versa), something that is being explored with increasing interest by a number of teachers and researchers, notably in France, where this film was made[1].

Sharper eyes might notice elements of the stage play from which the script was adapted, but they do not in my view intrude: this is a clever, funny and provocative film which won the top prize at the San Sebastián film festival and will be a hit on the arts cinema circuit. And the teachers in the audience will never again set that essay ‘My Summer Holidays’, if only for fear of what they might find out.