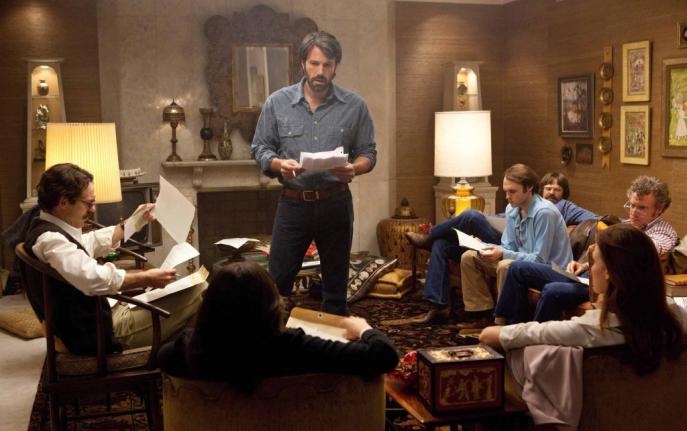 
Ben Affleck certainly has an eye for controversy when it comes to choosing his projects. The scheduled 2007 UK release date for his directorial debut, Gone Baby Gone, had to be pushed back after the film’s fictional storyline was all but mirrored in the real life case of Madeleine McCann. Now his third outing as director (after 2010’s The Town) sees him confronting, albeit historically, the delicate state of relations between the US and Iran, and doing so via a storyline which resonates strongly with other instances of discord in recent international affairs.

Argo tells the true story of what happened after the US Embassy in Iran was seized in November 1979 by supporters of Ayatollah Khomeini protesting against the US’s granting of asylum to their terminally ill former, oppressive leader, Shah Mohammed Reza Pahlavi. While dozens of embassy staff were taken hostage (and remained so for the following 444 days), six employees managed to escape unnoticed from the consular building. Fearing for their lives as detested Americans on the streets of Tehran, they managed to find sanctuary in the home of the Canadian ambassador, who, along with his wife, sheltered them at great personal risk.

On finding out about the escaped six, and after dismissing several other ideas for a rescue operation, the CIA devised a plan: they would set up the production of a fake movie called ‘Argo’, which would involve a ‘Canadian’ film crew travelling into and – crucially, if the operation was to be a success – out of Tehran on a location scout, right under the noses of the Iranian authorities. The operation was orchestrated by exfiltration expert, Tony Mendez (Ben Affleck), assisted chiefly by Hollywood make-up artist John Chambers (John Goodman). The scale of the deception behind the rescue attempt beggars belief and as such it provides riveting source material for this film. It is an exercise in story-telling of the highest order and therefore I will do it no further disservice by revealing anything more about the plot or the outcome.

Given its subject matter, it would be easy to assume that this is a political thriller, but Affleck avoids getting embroiled in the politics behind the thrill. This is not neutral territory – politically, morally or legally – but in order to allow the rescue attempt to take centre stage, as level a playing field as possible is established. For example, the treatment of the hostages who remain in the embassy at the hands of their Iranian captors is portrayed as brutal; yet a colleague of Mendez admits to having removed from Iran torture equipment used by the former Shah, against whose asylum the captors they are protesting – is their anger justified? There is an adequate and respectful acknowledgement of the gravity of the situation in which the core narrative takes place, but little direct engagement with it; Affleck appears to have found a delicate balance.

Such a narrow focus does, however, leave the film open to other avenues of criticism. Another reviewer has complained about the ‘unbalanced’ depiction of the Iranian people that this film offers. This is a valid point, but perhaps only worth labouring if one shares the corresponding concern that all Americans are either Hollywood big-shots or employees of a Government agency – or both. For good or for ill, Argo is not, nor does it pretend to be, a documentary or a political commentary.

Nonetheless there will be political comment made about this film. It would be nigh-on impossible to refrain from drawing contemporary parallels when the footage that opens the film – crowds of Middle Eastern revolutionaries descending on a centre of distrusted authority – so closely resembles what we have seen and heard about so many times over the past 18 months. The recent death of the US ambassador to Libya might mean that Argo will touch a few additional raw nerves, but Affleck’s avoidance of taking a stance on background issues ought to mean that no undue unrest is stirred by the timing of the film.

This is an exceptional film: intelligent, classy, gripping and well-acted. When the truth is this much stranger than fiction, the story writes itself to a certain extent, but that should not be allowed to diminish the praise that is due to Argo. Two recommendations to conclude: stay for the closing credits to see how much attention to detail went into the film’s staging; and, although this review is certainly not the definitive word on the film, try to avoid reading much, if anything else about it before you see it. That the events on which Argo is based took place before I was born is, I hope, a partial excuse for my complete ignorance of this incredible saga, but I was grateful that my tabula rasa allowed me to be astonished by the facts as well as impressed by their presentation. I have no doubt this film will still captivate those who know how the story ends, but if you can bear to keep yourself in the dark, your reward will be all the greater.

Learning to pray in front of the television

A ministry of welcome