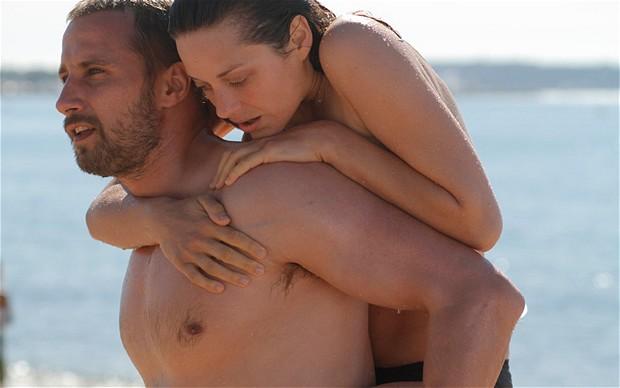 From writer and director, Jacques Audriard, Rust and Bone is a compelling, tempestuous, compassionate meditation on animal instinct, pain and grace. It is a sometimes violent, visceral ride in which alchemy transforms the pain of physical and emotional disability into love.

A Belgian man, Ali, played by Matthias Schoenaerts, and his five-year-old son Sam travel to a coastal resort in the South of France to escape a troubled past. Ali's sister, a supermarket cashier, and her husband, a lorry driver, allow them to stay. Ali finds a job as a bouncer and security guard, and through his work meets a surveillance camera installer who runs a bareknuckle boxing side-line. Ali starts fighting, and his physique and raw aggression become a money-spinner.

Ali meets Stephanie (Marion Cotillard) in a nightclub where he is a bouncer. She gets into a fight and he steps in to assist and gives her a lift home. We have no idea at this stage that Stephanie is a gifted trainer of Orca whales. However, soon after the nightclub scene, the action turns to Stephanie at work, where an incident with an agitated whale during a marine show results in her losing both legs just above the knee.

Stephanie’s anger and grief at losing her legs is hard to watch. She is depressed and festering physically when she meets Ali again but his unsympathetic, emotionally-removed response to her disability is just the antidote she needs, and it leads to her recovery. Their relationship is the opposite of convivial, it is brutal. Kissing is forbidden; the dissonance of their functional intimacy and her disability is harrowing to watch. The skill of the special effects team that depict the amputated legs so realistically is a point of wonder and admiration.

There is kindness and goodness in the film but Audiard goes out of his way not to sentimentalise it – Ali’s sister is good to take them into her home, but she is unattractive, awkward and uncommunicative. Her husband is hospitable and reasonable but only up to a point; he is everyman. Sam, Ali’s son, is played brilliantly by Armand Verdure and his submissive love of his dysfunctional father is a golden thread of grace that runs through the film and is drawn tight at an almost unbearable dramatic climax. My first reaction was to feel that this isn't fair – Ali and Stephanie do not deserve to find love and live happily ever after! Audiard's lead characters are mean and self-centred, and Ali is such a poor parent his son should be taken into care. But Audiard's skill is that, as unlikeable as they are, these characters are incredibly real and the viewer is taken up into their lives. How does a director take the audience beyond voyeurism towards a more intimate relationship with characters, to weather their ups and downs and to hope for something better for them? This is what Audiard does brilliantly; otherwise why would anybody willingly spend time watching a man beating others and getting beaten to a bloody mess, a woman loose her legs, and a child suffer his father’s dysfunction? Their pain does not even seem to lead them to wisdom. The only analogy that made sense of it for me is that of a family: for 120 minutes, Audiard, through the cinema’s voyeuristic ‘contract’, creates a family bond by proxy between the audience and the characters. And that is what is so compelling, the feeling that this is just a worse version of us. Perhaps this is what happens all the time in really good drama, and is the magical ingredient that we are hooked on, but it took this film to make me aware of it.

Spiritual implications and resonances are plentiful – it is this broken world of sin, suffering and aggression into which God sent his only son. God’s values are not our values – his generosity is superabundant and, as St Paul teaches, the greater the sin, the greater the grace (Romans 5:20). Thanks to the film I recalled Jonah and identified with him: he did not agree that the people of Nineveh should benefit from God’s grace and spent three days in the whale’s belly. So I am thankful for this film’s ability to make me think and realise that my ideas of atonement and fairness get in God’s way. This film swallowed me up and helped me to see things differently. Through the imagination of its author and director, we are reminded that God shows kindness to whom he will irrespective of their character or deservedness.

A Practical Guide to the Spiritual Care of the Dying Person