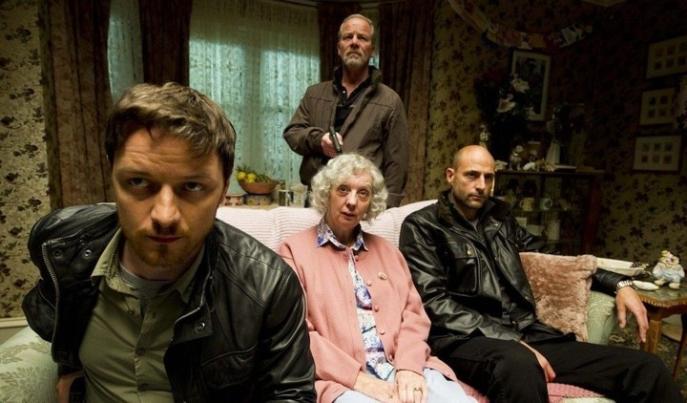 
British writer-director Eran Creevy clearly had high hopes for his second film, Welcome to the Punch (his first was 2009’s Shifty). Set amidst the dusky blue skyscrapers of London’s Canary Wharf, the film sets out its stall to be a slick, bold and generously-budgeted action thriller.

The plot follows a young, impulsive, but undeniably gifted detective called Max Lewinsky (James McAvoy) in his personal mission to bring infamous criminal, Jacob Sternwood (Mark Strong), to justice. It is not actually clear what crimes Sternwood has committed– this is deemed irrelevant to the plot – so the audience are expected to side against him simply because the police are after him. Furthermore, from the moment Sternwood inexplicably leaves Lewinsky alive in the film’s opening scene, one begins to suspect that either there is more to this film than meets the eye, or there is less. Unfortunately, it doesn’t take much longer to realise that it is the latter.

Thematically, the film is something of a patchwork. There are focal points, but they are not explored in any real depth. In an almost-clever moment, when Lewinsky’s personal desire for revenge (or justice, or whatever it is) collides with his sense of injustice in the face of wider corruption, Creevy nearly asks a question of his viewer, but ultimately what transpires is all too predictable and doesn’t provoke any real thought. Likewise, when Lewinsky finally comes face-to-face with Sternwood and asks him, ‘Why didn’t you just kill me?’, Creevy has a chance to hang the story against an interesting backdrop, but the answer, ‘For what?’, feels like a missed opportunity.

The relationship between Lewinsky and Sternwood is the film’s biggest weakness. The two men are set up as nemeses whose expertise will be pitted against one another and who will do battle until one has lost everything and the other has gained redemption. Unfortunately, the audience finds itself not really caring for McAvoy’s moping Lewinsky; neither does one harbour any particular feelings with regard to Strong’s Sternwood, who actually seems like quite a nice man in the absence of any knowledge of his supposed crimes. This makes for quite a flaccid tension between them: both actors do their best to make it look real and dangerous, but it is undermined by a weak script.

There are some positives to take from the film, however, one being the loving, brotherly relationship between Sternwood and his old friend and accomplice, Roy Edwards (played well by Peter Mullan). Likewise, Andrea Riseborough’s performance as Lewinsky’s partner, Sarah Hawks, is a good one, and nearly salvages the film. She is believable, likeable and interesting. It is a pity her role is not more prominent.

Welcome to the Punch exists entirely in an in-between world, where docks, wharfs and throngs of metal storage containers sit in the shadow of dragonfly-coloured finance castles. Docks and high office are two of the most notorious hubs of corruption in the history of cinema, and the collusion of these two landscapes ought to provide the perfect setting for a conspiracy that goes right to the top. Unfortunately, the potential of the setting is not fulfilled in the rest of the film. Without an intriguing plot or intelligent dialogue, Welcome to the Punch is not what it should be.

iWitness: Please, sir, can I give some more…?