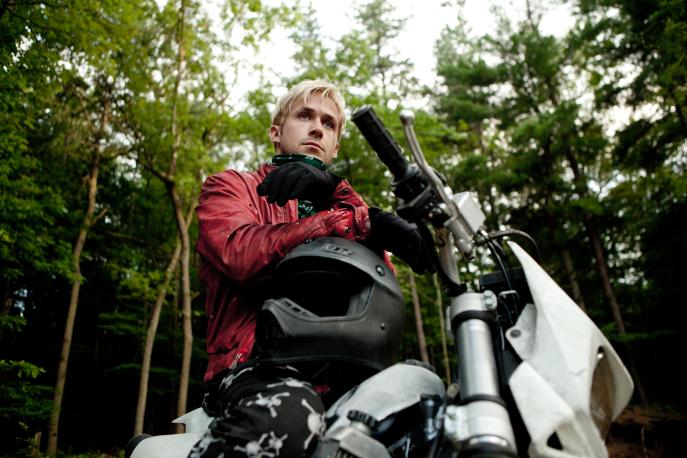 
When I came to write this review, I found that I had taken alarmingly few notes as I was watching The Place Beyond the Pines. The film provoked no more than six thoughts that I deemed worthy of the effort of putting pen to paper in the dark – and one of those was that a scene in which Ryan Gosling pretends to make a dog dance was the first time I had ever seen him look truly happy on screen.

I am reluctant to say that this is a bad film, but it is certainly bleak and it offered little, if anything, to which I reacted strongly. Director Derek Cianfrance’s previous film, Blue Valentine, in which Gosling also starred, was similarly desolate, but its singular narrative about a troubled marriage made it more accessible and engaging than the three storylines of The Place Beyond the Pines. The three segments each occupy approximately one third of the film’s running time, one after another: Gosling as Luke Glanton, a stunt rider who finds himself on the wrong side of the law (this might sound familiar if you have seen Drive and there isn’t much new in Gosling’s performance here – he has a few more lines, and his vehicle of choice is a motorbike rather than a car); Bradley Cooper as Avery Cross, a police officer confronted with corruption among his colleagues; and the sons of both men fifteen years later.

Gosling and Cooper are probably the biggest contenders for Hollywood’s Man of the Moment crown, but anybody hoping to see how they fare against one another on-screen will be disappointed. They share approximately two seconds of screen time, so even if their careers both continue along their upward trajectories, future critics will not speak of this encounter in the same breath as De Niro vs. Pacino in Heat. Neither performance is sufficiently good to drive their respective storylines; in fact I couldn’t help but feel that Cianfrance misjudged how effective his three-pronged attack would be, especially as none of the three is particularly sharp. The film might have fared better had he focused his attentions on any one of the narratives, relegating the other plotlines to background material; or perhaps condensed all three storylines and let the camera drift elsewhere to make this more of an ensemble piece – like 2004’s Crash, for instance. Eva Mendes’s character, the mother of Glanton’s child, gets a reasonable amount of attention, but as an accessory to his story rather than in her own right; and Rose Byrne is particularly impressive in her small role as Cross’s wife: both women, and other characters, could feasibly have carried storylines of their own.

The film is not without its highlights: the opening shot that tracks Luke from his trailer, through the fairground and onto his bike is loud, bright, dizzying and almost hypnotic – very impressive and energetic. However, the momentum doesn’t really carry through the rest of the film; at other times, Gosling is more akin to a motorised Little Red Riding Hood than a menacing delinquent as he haunts the pines of the title in his red jacket.

The dominant theme across all three chapters is the father-son relationship and at times the film is poignant in its presentation of fatherhood. Luke’s first encounter with his son sees him wiping his hands clean before he holds the baby; his intention to protect his son from the troubles that stain his own life is captured well in this small gesture. A close-up of his tearful face as the Lord’s Prayer is said at the boy’s baptism is also a moving, if not very subtle, way to convey the weight of paternal responsibility and concern. The use of an almost identical shot of Avery as he speaks about his own son during a counselling session is more effective than any other device in linking the emotional journeys of the two men.

I did wonder if I could attribute my ambivalence towards the film to the fact that the father-son dynamic is not one in which I will ever participate. However, I do not want to claim that the film is entirely closed to a female audience, nor can I pretend that it has no other flaws. With weak characterisation of the leads in all three uninspiring episodes, the film felt far longer than its two hour and 20 minute running time. That its most memorable scene was of a dancing dog says, I fear, much of what needs to be said.

Faith: the substance of things to be hoped for

He came all so still