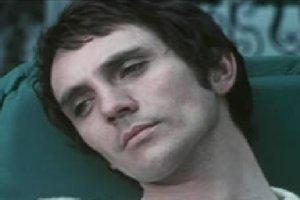 Pier Paolo Pasolini’s Theorem (Teorema, originally released in 1968) is being revived in UK cinemas in 2013.

Theorem starts in a realistic enough way, with colour newsreel footage of the reactions at a factory in Milan when it is announced that the owner is giving the plant away free to the workers. It then changes to black and white and flips genres as a clownish postman called Angelino bounds up to the factory owner’s villa, arms flapping, announcing that a guest is arriving. The unnamed stranger (referred to in the credits as the Visitor) turns out to be Terence Stamp, an enigmatic young man who stays in the house for a while. With the Visitor’s arrival, the film changes to colour.

There is no explanation for Stamp’s arrival, and he is immediately accepted into the household as though he is one of the family. For the duration of his stay (the largely wordless first half of the film), the Visitor’s mere presence is enough to change everyone’s lives. He saves pious maid Emilia from a suicide attempt with a gas oven; he befriends awkward teenage son Pietro and encourages him to pursue an artistic career; he allows Lucia, the stiffly-coiffured bourgeois wife, to seduce him; he massages factory-owner Paolo back to health when he falls ill; and he encourages Odetta, the daughter of the house, to get over her fear of men.

Drawn wordlessly to the Visitor by some mysterious charisma, each member of the household invites the stranger to couple with him or her sexually. Stamp quietly closes the paperback he is reading (usually Rimbaud) and dutifully obliges, though there is something awkward and oddly unerotic about these encounters that make them seem more like healings, perhaps something like the full-body healings administered by the prophets Elijah and Elisha in the Books of Kings. Pasolini quotes from Jeremiah, ‘You have seduced me Lord, and I have let myself be seduced. You have violated me and you have prevailed.’ Leafing through an illustrated book of Francis Bacon’s paintings, Pietro and the Visitor pause at an image of two men, their bodies locked together on the floor. All the couplings in the film share something of that painting’s awkwardness and desperation.

Then, just as suddenly as the announcement of the arrival, the postman-herald Angelino appears again with a message that the Visitor is to be called away. This is the cue for a convulsive deluge of words, as each character confesses to Stamp how his or her life is now changed. Pietro asks, ‘What will become of me from now on? The future will be like living with someone nothing to do with myself. Won’t this set me against everyone?’ The boy could be voicing the bewilderment of Christ’s disciples before the Ascension. Lucia tells Stamp, ‘What you gave me is love in an empty life.’

Made four years after Pasolini’s The Gospel According to St Matthew, Theorem seems to be a meditation on that earlier work. If Matthew was the director’s canonical gospel, Theorem may be seen as a gnostic gospel that examines the life-changing effects of a Christ-figure whose power is mainly sexual. The greatest difference between Theorem and the canonical gospel is in how lives are changed – it is clearly not always for the good (far from it.) Wikipedia says the film won a special award at Venice from the International Catholic Film Office, but had it withdrawn later when the Vatican protested. No surprises that Catholic Italy was torn; a similar tension pervades the whole film.

Theorem was the first Pasolini movie to use professional actors, but he also uses some of the non-professionals he discovered earlier for Matthew. Angelino the postman appeared as a Bethlehem shepherd in the earlier film; the family’s doctor (who cannot raise the daughter of the house when she falls into a catatonic state) was the apostle Andrew; a handsome young man at Milan station played the apostle James; and an elderly peasant woman – Susanna Pasolini, the director’s mother – played the Virgin Mary. Perhaps the most evocative location Pasolini found for Matthew was the volcanic slopes of Mount Etna for the Temptation in the Desert scene. Pasolini returns repeatedly to shots of Etna’s smoking ash in Theorem. The film seems haunted by the earlier work.

Theorem was also the first film that Pasolini (a lifelong Marxist) set among the bourgeoisie, but the film can only have bewildered the European Left. Far from being a didactic indictment of the rich, the film treats the Milanese boss’s family and the southern peasants in the maid’s village with a placid equanimity.

As in Matthew, the film’s music is mostly found rather than composed for the film, and again there is a jolting mix of genres. A mournful jazz piece (Tears for Dolphy by Ted Curson) accompanies the rural village scenes while Mozart’s Requiem, first heard when the Visitor massages the factory owner back to health, accompanies the scenes of Stamp’s ‘healings.’

Much of the film is beautifully shot and directed, particularly the second half. The sequence when Lucia is out cruising in her mini car for young men particularly stands out. Pasolini’s direction of the Stamp scenes is mostly remarkable for the way the camera focuses on the crotch of his beige trousers, or on his discarded underpants on the floor.

But Theorem is much more than a homosexual film director’s meditation on Christ’s loincloth. The film is a major cinematic work, and a haunting and mysterious one at that. In an audacious scene near the end, the sainted maid Emilia has levitated and hovers, arms spread out, over her peasant village. If the film’s original audience was reminded of the statue of Christ carried by helicopter over Rome at the start of Fellini’s La Dolce Vita, in Pasolini’s hands the image is now jolting and miraculous. This time there are no strings.