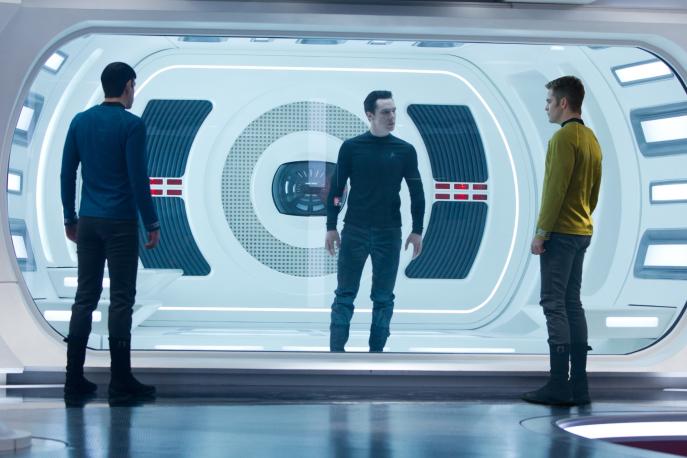 
For those of us of a certain generation, Star Trek is like an old friend. We have grown up with its now-familiar characters: Kirk, the hot-tempered captain who invariably steers his ship through dangerous waters; Spock, the cool, rational half-Vulcan whose logic usually finds a way through an impasse; Bones, the doctor who quite often clashes with Spock but whose pessimism naturally balances the can-do attitude of Kirk; and who could forget Scotty, the engineer who is able to fix even the dilithium crystals with a penknife! The dynamic that exists between these colleagues has been the key to the ongoing appeal and success of Star Trek since the inaugural television series in 1966. As the crew of the USS Enterprise undertook missions to explore strange new worlds, the relationships they formed with all kinds of weird and wonderful creatures outside the Enterprise were used as a contrast to highlight the fundamental value of existence that was exemplified on board the ship: friendship.

The alien races that the crew encounter are sometimes portrayed as enemies because they are endangering lives through their greed or desire for control. Whilst the Enterprise is officially dispatched to seek out new life-forms and new civilisations, more often than not the crew are required to provide protection from alien enemies such as the infamous Klingons. In doing so, they are defending the universal rights to peace, security and prosperity that the United Federation of Planets, of which the earth-based Starfleet is a member, is charged with upholding.

It is the consequences of attacks on Starfleet premises in London and San Francisco which provide this twelfth Star Trek film with its storyline. But this time it is not aliens (aside from a cameo appearance from the Klingons) who are the enemy. The ubiquitous English villain, John Harrison, a genetically modified superhuman played chillingly well by Benedict Cumberbatch, leads the charge. Characteristically for films of today, the convoluted plot complexifies the black and white portrayal of goodies and baddies of the old Westerns. In the end though, good triumphs and evil fails. The story is familiar for those with religious faith, and indeed anyone who shares what the Stoics might have considered to be their ‘prime directive’ – cosmopolitan friendship. The good binds together; it is the natural order of the cosmos. The Stoics realised this well before Christianity arrived on the scene. Evil fragments and destroys itself, and in the end it will always lose this cosmic Manichean battle, variously depicted by Hollywood.

And this is why, in any Star Trek film, it is never really the plot that is the most important thing. It is the character development explored through the friendships between the crew members and with other civilisations which dominates. Precisely because of this, any producer needs to tread carefully with a new Star Trek film. Relationships are at stake here. The need to respect this core of friendship, whilst at the same time realising that in order for the concept to survive it needs to continually recruit new friends, presents a challenge. Yet, it is a challenge inscribed in the very DNA of the Stoical character of Star Trek. An ever-expanding circle of friendship is what makes Star Trek, Star Trek. The producer and director of Into Darkness, J. J. Abrams, understands this balance between the old and the new, and successfully keeps the old Trekkies on board whilst recruiting a new generation of friends in this, his second foray into the brand. Into Darkness thrills and excites with its action-packed explosions and special effects, as any self-respecting Hollywood science fiction film has to do today. But it reaches beyond this necessary but insufficient condition for a good Star Trek film. Into Darkness boldly goes where all voyages of the USS Enterprise go: into friendship.