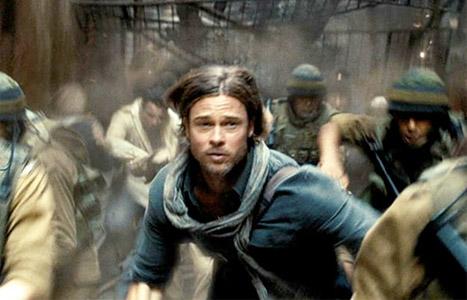 
‘Action-packed’ is one of those ubiquitous terms that is plastered across billboards alongside phrases like ‘Hollywood blockbuster’ and ‘hit of the summer.’ World War Z falls solidly into this camp of films; in the first five minutes we see a group of rabid, zombie-esque humans attack the people of Manhattan – rather viciously, may I add – on their commute to work. The camera pans up and zooms down on the helpless mob to reveal the detail as well as the extent of the attack.

At the centre of this panic is Gerry Lane (Brad Pitt), a UN coordinator-turned-stay-at-home dad, who must now step up to defend his family from the zombie crisis which has spread around the world in a matter of hours. Gerry, because of his qualifications and his UN connections, is plucked from the New York wasteland, which is now feeding on itself, and taken to safety on a US warship. With his family safe, too, he is tasked with finding out more about the rabies-like virus that is causing the global population to bite each other, thus multiplying the army of the undead.

Lane’s first trip takes him to South Korea, where he learns little about the origins of the virus until he speaks to a prisoner who tells him he must go to Israel if he really wants to learn more. Lane flies to Jerusalem where he sees that the Israelis have built a high wall around the centre of the city to keep out the invading zombie army. There is of course room for a socio-political interpretation here as this undoubtedly echoes the divides Israel has built between themselves and Palestinians. However, it is not clear whether Forster is condoning or condemning the wall; after all, the film briefly shows Palestinians and Israelis living inside the wall together. Perhaps he is discussing the idea that no such divide can be truly effective, as Israel eventually succumbs to the attacks of the undead. Or perhaps a Hollywood zombie film is not the most sensitive or effective arena in which to discuss decades-long conflicts.

It is in Israel, though, that Gerry meets Segen (Daniella Kertesz), a female soldier who becomes his companion for the rest of the film. After saving her from a zombie bite, he helps her escape on the last flight out of Jerusalem. This is the first point in the film at which there is any semblance of examination of what has happened – the full enormity of the breakdown of society seems to dawn on people for the first time. But this reflection is only fleeting. We are again bombarded by aerial shots of zombies and sweeping shots of victims turning into attackers; we are even treated to close-ups of people getting their faces ripped off. This is all well and good if Forster wanted to create just another zombie flick. However, Max Brooks’ novel (from which the film was adapted) looks at fear and uncertainty about the apocalypse using a collection of individual accounts, which gives more depth to huge subjects such as the breakdown of communities, fear of the unknown and survival; the personal becomes the universal. Sadly, this depth does not transfer to the film.

World War Z is, however, gripping. There were points when I felt as if I were a teenager playing gory computer games late into the night. To this end, I suppose the film has its merits. The zombies, it must be said, were chilling. Creating zombies that can genuinely repulse an audience is actually quite a skill when you take into account the number of ‘monsters’ that we see in films nowadays. However, it is hard to generate a stronger reaction than this to World War Z, which is a shame. In recent years, audiences have been treated to some great zombie films (just look at 28 Days Later), which examine human approaches to the extreme in real depth. This is not one of them, and instead World War Z is unfortunately just another ‘action-packed Hollywood summer blockbuster’.