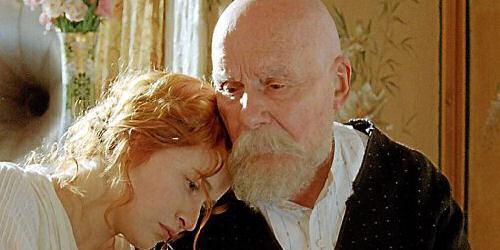 
Renoir is an impressionist film about an impressionist painter. It mimics the work of the painter Pierre-Auguste Renoir in both narrative and cinematography, offering a glimpse of the life of the Renoir family.

The plot begins as aspiring actress, Andrée (Christa Theret), arrives at the French Riviera home of Renoir (Michel Bouquet) near the end of his life in the summer of 1915. Hoping to pose for his paintings, she arrives and meets his youngest son, Coco (Thomas Doret), a neglected boy with a far more negative view on life than his father. As Andrée and Renoir develop a working relationship, it becomes clear that Renoir suffers from rheumatoid arthritis, which facilitates the film’s theme of mortality. He also struggles emotionally with the recent death of his wife and with the knowledge that his two eldest sons are risking their lives fighting in the war.

His second son, Jean (Vincent Rottiers), soon arrives home on sick leave. Their greatly-anticipated reunion is filled with father-son affection, but Jean vows that, if he is physically able, he will return to the front to support his comrades. His willingness to step into harm’s way is something Renoir does not understand. This difference between father and son is explored throughout the film.

While Jean is home he falls in love with Andrée and they begin a sexual relationship. She asks Jean to fund her future films, under the false impression that his father’s wealth means that Jean is wealthy as well. Renoir’s money seems to be one of Andrée’s motivations, although not her only one, for coming to his home: she expects to get paid for posing when no other model has ever been paid. She wants this job to take her somewhere, whereas nearly every other model has simply become a maid in Renoir’s home. And while she has appears to have feelings for Jean, I wondered if greed and low self-esteem were simply masquerading as affection.

Jean and Andrée’s relationship is a difficult one to grasp. Jean is so quiet I found myself asking, ‘Does he really love her? If so, why?’ His actions indicate that he does: after Jean tells Andrée that he is returning to fight, she runs off to a bawdy nightclub; he finds her and comforts her by saying that he will survive, he will return, and they will make films together. He implores her, ‘Renoir needs you,’ to which she replies, ‘Which one?’

The film is so vague, or rather impressionistic, that it is difficult to make a complete judgment on her character. The film does not judge or condone, but expresses and informs. I have the impression of disliking Andrée, but the film portrays her so marvellously with bright colours and gentle movements that I cannot help but see her as a beautiful and deeply emotional person.

Likewise, the contrast between Renoir’s vision of life as beautiful and Jean’s vision of life as a series of choices is also more an impression of two differing people rather than a heated contention. Jean asks his father why he does not paint anything about the harsh realities of life and Renoir says, ‘A painting should be something pleasant and cheerful’; there is no reason to create more pain. It is clear that Jean respects and loves his father but has ideas of his own. He sees great value in camaraderie, and although it could end his life, he believes returning to fight is a choice he must make. Jean chastises his father for avoiding decisions; Renoir, however, desires simplicity: ‘My whole life I tried to paint like a child without knowing anything, without thinking.’

These impressions of characters are created with subtle skill in cinematography. In one scene, Renoir paints a scene of his maids while they play in the river. The camera tracks from his paint brush and his canvas to the actual scene as it unfolds, but the camera does not focus; it remains extremely soft, so that the maids are gently outlined. It is these sorts of shots which pay tribute to the great painter’s style and shape the film’s presentation of people and relationships.

As I considered this, I wondered if the film’s portrayal of differing opinions without judgment could have moved into the realm of moral relativism, but I am grateful to say it did not. Rather than condone any or every viewpoint, this film offers the audience an opportunity to simply relate to each one. For my part, I felt drawn to Renoir’s sense of wonder at the beauty of the present moment, but I was also sympathetic towards Jean’s sense of duty. Perhaps others might feel a kinship with Andrée and her need for support or with Coco and his desire to be comforted and loved.

The last moment of the film is perfect. After a tender moment between father and son, Jean has left for war and Renoir sits alone, an old man in a wheelchair, looking out of a window at a baby in the grass as the child learns to walk. He is neither depressed at this sight nor overjoyed. He notices the circular beauty of life and accepts it; this is life, this is the simple beauty that he has always sought to paint.