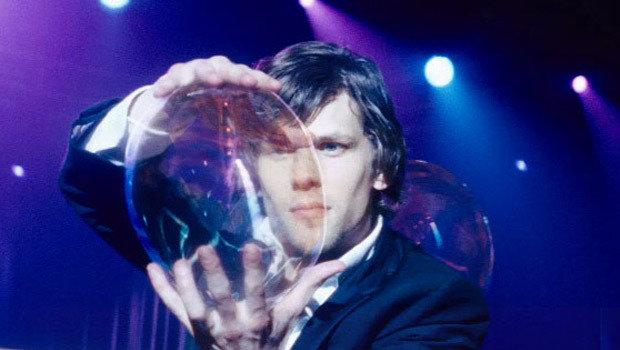 Now You See Me is the latest offering from director Louis Leterrier (Clash of the Titans, The Incredible Hulk, Transporter 2) and in many ways it follows in the footsteps of his previous efforts. It is a slick, fast-paced, Hollywood picture with a penchant for lavish showmanship; it has a plot that can be quite hectic and is in danger of getting lost chasing its own tail; and it does not leave a great deal of room for character development. However, it is undeniably engaging and although it is far-fetched, it comes across as naïve and fantastical rather than ill-thought out and clumsy.

Taking centre-stage are four talented street magicians (played by Jesse Eisenberg, Isla Fisher, Woody Harrelson and Dave Franco), each of whom is summoned by a mystery figure to partake in an audacious and grand plan to wow the world, etch their names in history and reach the pinnacle of the magical tradition. Of course, the anonymous puppet-master has a far grander agenda, but ‘The Four Horsemen’ must follow their orders blindly and without question, their true goal never within their sights.

The first stage in the great scheme is a bank heist which seemingly takes place during a live magic show in Las Vegas. All of the stolen money is then given to the audience in the theatre in a Robin Hood-esque gesture of wealth redistribution. This ‘magical’ robbery leads to a hot-headed but savvy detective (Mark Ruffalo) and an inexperienced yet intelligent Interpol operative (Mélanie Laurent) being assigned the unenviable task of out-witting and catching this new alliance of quick thinkers and escape artists. The furious cat and mouse exercise begins, with the detectives always two steps behind the magicians and continually being out-manoeuvred.

Early on, there are some great exchanges between the four magicians. Atlas (Eisenberg) and Henley (Fisher) have an interesting past that makes for some amusing repartee, and Merritt (Harrelson) has a great way with words and a sardonic wit that is especially enjoyable in the first half of the film. However, as the film progresses and the plot becomes ever more complex and brisk, we see less and less of the magicians’ interactions, and one struggles to bond with any of them in a meaningful way. They become stage personas alone, performance magicians, rather than characters within a story.

As the Horsemen’s grand scheme progresses, the film starts to ask some questions of the audience. ‘What is magic? Focused deception. But deception meant to entertain’, says Atlas. The morality of deception as a form of entertainment is a recurring theme. The two detectives have one interesting conversation in particular where they argue about this, Ruffalo’s Dylan Rhodes labelling all such deception as exploitation of people’s need to believe in something, while Laurent’s Alma Dray views it as a bringer of joy and wonder, and therefore a worthwhile exercise in imagination and fantasy.

The film ultimately supports Dray’s view, and this is a wonderful way to look at ‘magic’ – not necessarily just the craft of magicians, but the wider concept of magic, of fairies and talking animals and Neverland and Narnia. But Now You See Me is really illustrating another vision of magic: the ideal of justice being done, of the wicked being punished and their victims indemnified, of a brave and talented few taking it upon themselves to confront the forces of injustice prevalent in everyday life and win victories in the name of the powerless. The film encourages us to see the magic in this redressing of the balance. Although The Four Horsemen broke laws to enact their brand of justice, it is difficult to condemn them outright for taking money from an insurer that refused to pay out after Hurricane Katrina and giving it to the population of New Orleans. In this world of ‘magic’, morality is not black and white.

Now You See Me is a fun, fast and engaging film. It is not going to explore grand concepts in any depth or open minds to anything new, but it is an enjoyable story with one or two exciting twists. There are also some good performances; Harrelson’s in particular is noteworthy, as are solid turns from Morgan Freeman, Michael Caine and Eisenberg. Don’t go to the cinema expecting a groundbreaker, but at the same time, it is a much better film than many others of its ilk.