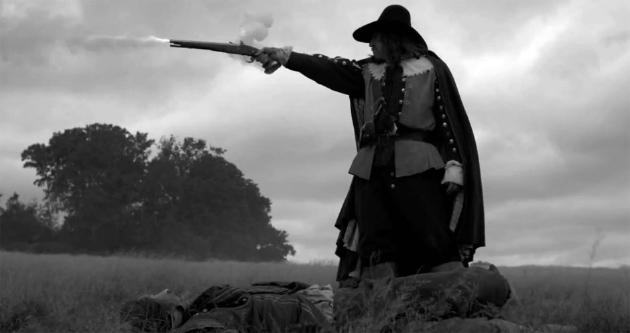 
It seemed that out of the battle I escaped

Down some profound dull tunnel, long since scooped
Through granites which Titanic wars had groined.
Yet also there encumbered sleepers groaned,
Too fast in thought or death to be bestirred.
Then, as I probed them, one sprang up, and stared
With piteous recognition in fixed eyes,
Lifting distressful hands as if to bless.
And by his smile, I knew that sullen hall;
By his dead smile I knew we stood in Hell.
(From ‘Strange Meeting’ by Wilfred Owen)

Wars suffuse the English imagination and identity: look at the way the UK newspapers draw on Dam Busters imagery every time a British politician fights to get something ‘back from’ or ‘off’ the European Union; or the relationship with Ireland and other, dustier parts of the world; or the barely-hidden English sensitivities behind an England-Germany football match. The team who made A Field in England pick away at this scab but in a tangential way, by setting their film in a field off an unnamed battle in the English Civil war. Another reason for the 17th century setting of this film might be to see the religious, class and ethnic conflicts that ripped through the English Civil War as metaphors for tensions that remain unresolved and part of British society.

I started this review with an extract from Wilfred Owen’s ‘Strange Meeting’ because this is one of a number of literary sources – often about war or conflict – that appear to have influenced the making of this film. Owen imagines a meeting (and ultimately a reconciliation) between two soldiers of the opposing sides in the First World War. The poem opens with the stanza quoted above, in which there is a mystical escape from the din of war into some calmer, stranger place, where the meeting between the solider and ‘the enemy you killed’ takes place. Owen imagines a calm walk out of battle into a deathly, granite Hell; director Ben Wheatley and writer Amy Jump borrow this idea of a magical passage out of war into a place for metaphysical reflection, but instead of a calm walk into a stony underworld, they offer a panicked scramble through undergrowth into an endless, not quite Elysian, English field.

This film seems so saturated with these references to novels, plays or poems, that it becomes almost a reflection on literary Englishness through the medium of film, maybe. I say ‘maybe’ because other reviewers do not appear to have noticed this: that might be either because writers for Thinking Faith are particularly sensitive, well-read and perceptive; or it might be because I am the sort of person who reads meanings into things where there is no meaning, where there is just absurdity. Either way, the inter-textual readings I am going to offer will make it easier for you to get a picture of what sort of film this is, and decide whether or not you want to see it (which is, after all, one of the primary functions of film reviews).

First, there is Pincher Martin, William Golding’s third novel. Terry Eagleton spends a chapter of his excellent book, On Evil, reflecting on this story of a naval officer floating in the ocean after being torpedoed. The novel is a narration of Christopher ‘Pincher’ Martin’s interior monologue as he struggles with the sea, hovering between life and death, as (maybe) are the protagonists in A Field in England: they have escaped from a war, they might be dead, they might be alive; we do not know and we are never told.

Second, there is absurdist drama. Becket’s Waiting For Godot comes to mind here, a full-length play in which, basically, nothing happens. There’s a tree, there’s a length of rope, there are a handful of male characters; they wait, they do things - but certain expectations about drama are ignored in an exploration of what existence is about. Replace the word ‘drama’ in that last clause with ‘film’ and you get both a serviceable tweet about A Field in England, and an indication as to one of its other sources – any one of Pinter’s plays might also be identified as an inspiration for the script. (You also get a hint as to why a lot of people will really not like this film, not one little bit).

Then there are the filmic influences. Chief amongst these must be Peter Greenaway (I am sure I heard a musical nod to Michael Nyman’s score for The Draughtsman’s Contract). Greenaway lends to A Field in England maybe both the 17th century setting and the filmed tableaux that form moving parodies of the paintings of that period which appear towards the end of the film. However, the filmic references also include the early 20th century avant-garde, the greats of pre-Stalinist, Soviet Cinema (Eisenstein and Vertov), and the surrealists such as Buñuel. This latter set of homages come to the fore after the first hour or so, when the audience is offered a mesmerising, strobe-like sequence in which razor-tight editing and frame-by-frame montage give the audience a vision that is as close to an LSD trip as I want to go. I must add that this particular sequence was breathtaking and compelling, producing a dreamlike set of mysterious and memorable images.

Other ingredients in the soup include Carl Gustav Jung, whose ideas of alchemy and archetype seem to have influenced some of the writing, though (as the great psychologist himself might have said) I am not sure to what purpose or to what effect.

It is also a ravishing piece of cinematography. Shot entirely in black and white with what looks like heavy use of a blue filter to increase the skin-tones (and heighten the sense of the weird), Laurie Rose’s photography is an extended formalist study in the English picturesque. Maybe this sits uncomfortably with the absurdist quality of the script (and the expressionist moments), but on balance I don’t think that textual coherence was one of the priorities of the team. This is experimental film-making, using the medium to explore the idea of Englishness, and as such it is a refreshing antidote to the banality and predictability that fill most cinema programmes.