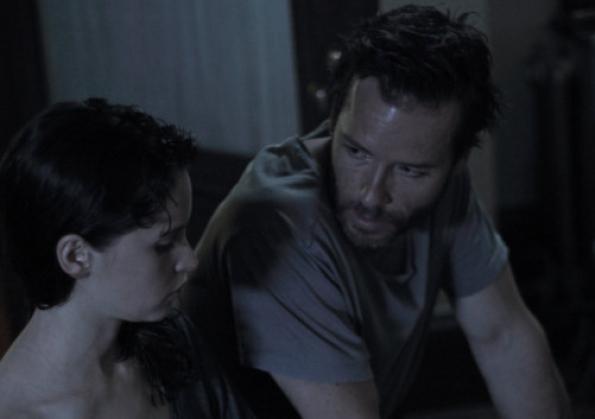 
Breathe In presents modern family life and the self-indulgence and egoism that can break it down. The film is a commentary on the state of the family in our modern culture, presenting two negative approaches to family life, one of selfishness and the other of self-pity. But there is another approach to family life that the film does not consider: that of life as self-gift.

Guy Pearce plays Keith, a high school music teacher in a town outside New York City. He laments his career, never having wanted to be a teacher and wishing he could embrace his passion for music more deeply through his work. To help fulfil that desire, he prepares for an audition for the cello chair of a symphony orchestra in the city, but it is clear that he and his wife, Megan (played by Amy Ryan), have different opinions about the importance of his music; she sees it simply as a ‘hobby.’

During this time, Keith, Megan and their 18-year-old daughter, Lauren (Mackenzie Davis), host a student from the UK for a semester. The student, Sophie (Felicity Jones), is at first somewhat subdued amongst the family. She clearly has opinions she wishes to voice, but she is clever enough to know when to speak her mind and when to remain quiet. A great pianist herself, she is prompted by Keith to play in his music class. She reluctantly agrees and plays a powerful piece of classical music that grabs Keith’s attention and stirs his heart. Although he had witnessed her quick intelligence previously, it was at that moment that her passion for music fanned the flame of his own passions and encouraged him to let that fire grow.

Having seen the trailer, I knew about the main drama of the story before I sat down in the cinema: Keith and Sophie would have some kind of romantic relationship. So, from the beginning I was biased again Keith (and Sophie) and he never earned my full respect or sympathy. My bias was due not only to the foreknowledge of the relationship, but also to the story’s failure to offer the actor enough nuances to play a likeable character. As subtle and powerful as Pearce’s performance is, Keith’s decision to abandon his family in favour of a relationship with an 18-year-old was far too easy. It seemed that the only reason that he considered remaining a family man was his sense of obligation, not any sense of self-giving love.

During a romantic moment along a riverbank, Sophie says to Keith, ‘It’s hard to know how to be truly free and whether or not that’s a good thing.’ Keith’s response summarises his internal conflict: ‘Maybe boundaries are there for a reason.’ Both Keith and Sophie acknowledge their desire to be free and their uncertainties about how to fulfill that desire. However, without a grasp of what ‘freedom’ truly means they instead choose to give in to their self-indulgent passions and they run away together, a scandal Keith’s wife and daughter learn of quickly.

It is only when Lauren is in a major car accident that Keith is prompted to return. After he arrives at the hospital, he cries in anguish, partly for his daughter but mostly out of a sense of self-mortification. This was the moment when I felt the tiniest bit of sympathy for him. At least he showed some regret; at least reality caught up to him. Following that scene and in the final scene of the film, it becomes evident that Sophie has left the family and Keith, Megan and Lauren are a family of three once again, but their relationships are strained and damaged. Before Sophie’s arrival they were a dysfunctional family but they were primarily ignorant of that. After Sophie’s departure, they are all aware that passion and fulfilment are missing. They cling to each other more out of obligation than out of freedom.

Breathe In presents two sides of a dirty coin: give in to selfishness and abandon your family, or embrace self-pity and remain emotionally distant from your family. Keith made the right decision to stay, but he did not make it for the right reasons. Freedom is not passion without limit, and obligation is not responsibility without passion. Keith misses the point because he does not understand true freedom. Rather than think, ‘How can I get life the life I want to live?,’ he should have been thinking, ‘How can I live the life I want to give?’

The Imaginarium of Doctor Parnassus

The Continuing Presence of Archbishop Romero