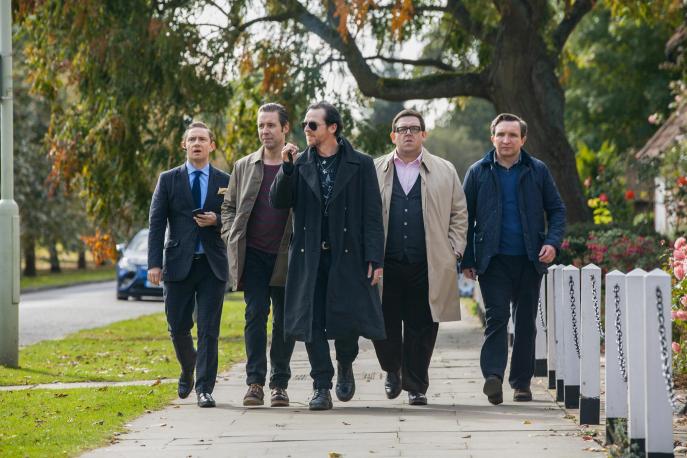 Simon Pegg returns with director and writer, Edgar Wright, to make the last film in the so-called ‘Cornetto Trilogy’. The trilogy, which includes Shaun of the Dead (2004) and Hot Fuzz (2007), is a genre-hopping collection of comedies which see their lead characters reflecting on mid-life regret and harbouring a wish to change their one-paced, small-town lives. However, it is the bizarre twists in each plot which tend to supplement the melancholic humour and ask the audience some of life’s bigger questions.

The World’s End starts with a flashback to the summer of 1990 in the small, middle-England town of Newton Haven. Gary King (Thomas Law) is a good-looking, charismatic, 18-year-old leader of a group of friends embarking on a legendary pub crawl. Their quest is to consume twelve pints in twelve different pubs along ‘The Golden Mile’, finishing at the ‘The World’s End’. Their attempt is ultimately unsuccessful, and the film fast-forwards 20 years to find an alcoholic, soon-to-be 40-year-old Gary (now played by Simon Pegg) reminiscing about the glory of his youth and lamenting how he never reached his potential. The nostalgia is so strong in Gary that during an Alcoholics Anonymous meeting he resolves to gain closure on that part of his life by reassembling the old gang and making another attempt to complete the Golden Mile.

The movie takes on an awkward, post-coming-of-age feel when Oliver (Martin Freeman), Peter (Eddie Marsan), Andrew (Nick Frost) and Steven (Paddy Considine), all of whom are married, have children or are established in successful jobs, come back together in decidedly reluctant fashion. When they meet up with Gary he is still driving the same car, ‘The Beast’, and even continues to play the mixed cassette tape that was made for him by Steven when they were at school. Initially all the enthusiasm for their quest comes from Gary, and he is accused of inviting the rest of them along simply to enable his drinking habit and relive his former glory.

While the rest of the group cannot believe how depressingly generic their hometown has become – poignantly highlighted by the way in which many of the taverns have been turned into characterless chain pubs – Gary is too invested in the myth of his youth and how the pub crawl embodies this to notice. The reality is that, far from being welcomed back as the trailblazing, prodigal sons of their own imaginations, no one seems to know or care about who they are.

Change is not limited to the pubs or the town’s high street but to the anodyne people who frequent them. The reason for this is discovered when Gary gets into a fight with one of the town’s baseball cap-wearing teenagers. Not only is this teenager rude, he is frighteningly strong and agile. It is only when Gary happens to knock the teenager’s head clean off that he realises that the young thug is actually a blue-blooded robot! The group come to realise that almost all of the town’s inhabitants are similarly affected and are connected to one another through a master server called ‘The Network’. As this realisation dawns upon the group, they are approached by the robots and invited to assimilate peacefully into The Network. Their refusal to do so inevitably causes the body count to rise.

Considering the plotline, it was easy to feel as if I had seen this all before, just with spaced-out zombies instead of overly-ambitious robots. However, in a way not-too-dissimilar to nostalgia, the similarity that the film bears to Shaun of the Dead was comforting and acted as a kind-of guarantee that I could switch off, settle back and enjoy some tried and tested entertainment that I knew I would enjoy. Yet as the film progressed I could not avoid the feeling that it was exactly this comfortable, non-questioning and frankly lazy attitude that the film was warning against. Seasoned sci-fi fans will identify numerous nods to Invasion of the Body Snatchers and The War of the Worlds, as well as echoes of John Wyndham’s book, The Midwich Cuckoos, and its film version, The Village of the Damned. All of these stories are tales of invasion, assimilation and ultimately eradication. The mechanism for assimilation and eradication in The World’s End is the gentle and apathetic acceptance of something we do not really want. In this film, that ‘something’ is the homogenisation and sterilisation of our culture, which is aided by social and commercial networks enabling ever-greater numbers to accept such uniformity as the norm. In this way, The World’s End takes up its place in the Cornetto Trilogy as a call to arms to break out of our comfort zones and challenge ourselves to identify exactly what we want changing… and wallop any robots who stand in our way of doing so.

Rediscovering dialogue between the generations: Synod 2018

The post-election crisis and the ground of our hope