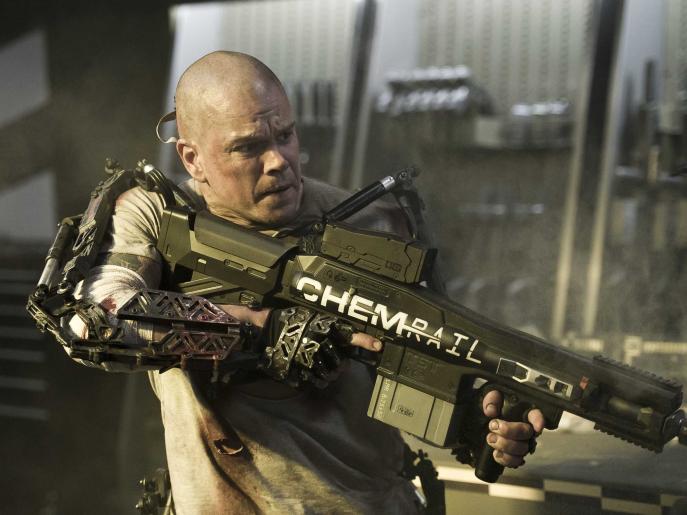 
Elysium is effectively a glossy, Hollywood-produced comic book. Framed by a dystopian near future, in which the San Fernando Valley high rises and studios have been overrun by wall-to-wall tenement squalor, Matt Damon is the Clark Kent everyman whose super destiny seems to be to achieve the Los Angeles dream: eternal poolside health and glamour. Visually engrossing, the most convincing screenshots are filled by the teeming chaos of ragtag Spanish-speaking barrios, where the tattooed, prison-freed Damon calls a dingy apartment home. He emerges one morning, commuting to the factory where he bolts together the police bots that keep him in economic servitude, and bestows the one moment that transcends the otherwise unflagging two-dimensionality of the film’s narrative and characterisation: he flips a five dollar coin to a gaggle of dirty youngsters, thereby depleting the meagre savings intended to secure him a rocket-ride to space station paradise on Elysium. The piped-in sound of the flipped coin rings true in more ways than one, evoking the film’s $115 million budget, from which the visual effects seem to be the best boast.

There are a few interesting themes. What glimpses we get of the make-do creativity and desperate solidarity of the poor, although largely relegated to the background, constitute the real vitality of the film. Their limping and disease-hampered lust for life is all the more striking when juxtaposed with the sterile and sated Elysium elites, whose manicured space-lawns might very well have been filmed as-is inside many a southern California gated community. If this is the conscience of Hollywood speaking, let us pray there are also enough well-disposed cleaning ladies around to translate its utterances into English.

Another engaging theme of the film is an implicit endorsement of the near-salvific effect of modern medicine. A gritty version of the medical technology in the film can be seen in the promotional posters, screwed roughshod through Damon’s t-shirt; a more pristine parallel is the cure-all MRI-like machine which perpetually renews the Elysium citizenry into immaculate beauty. Resonances with contemporary American uneasiness over public access to healthcare are less interesting, I think, than the discordant notes surrounding the ideal these technologies facilitate. The machines almost literally apotheosise their users: they grant either superhuman combat skills or undying youth – a well-preserved Jodie Foster appears to be the oldest person on Elysium – and so everyone wants them. Yet there is something about the empty back yards and vacant terraces of the sun-kissed space estates which does not answer to the sprawling energy of the earthly neighbourhoods. There is manifestly more truth embodied, for instance, in the stooping, wizened pig lady who helps Damon in a moment of trouble than in all the smooth, sun-tanned Elysians who want him dead. If this is, in fact, an indirect acknowledgement of some superior vital element among those who hunger and thirst in this world, then the film’s more obvious espousal of the LA ideal may be less stable than at first it seems.

The heavens in Elysium are certainly less engaging than its depicted hell-on-earth, to the same degree that its cultivated garden tea scene is less enticing than its raucous shantytown meat-sizzle. If there be any enduring value in this episode of late-summer cinema – beyond the scholar’s remembrance of the final time, I hope, that Harvard-trained Damon consented to play a beefed-up punching bag – it may be the film’s unconscious prophecy of that day when the hog-tenders save the hair-stylists from the wreckage of their machines, and the fallen privileged find, to everyone’s surprise, a welcome among the houses of the poor.

The plank in your own eye

After Humanity: A Guide to C.S. Lewis’s The Abolition of Man