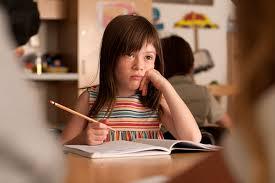 
Based on the 1897 Henry James novel of the same name, though set in modern-day New York instead of James’s London, What Maisie Knew is told through the eyes of the titular heroine. Maisie (Onata Aprile) is caught in the middle of the increasingly bitter custody battle between her parents: Susanna (Julianne Moore), a temperamental, aging rock musician; and Beale (Steve Coogan), a steady and charming, though often distracted, art dealer.

Directors Scott McGehee and David Siegel have taken a huge risk by making six-year-old Maisie the focus of the film, but playing the story through her young eyes and resisting the temptation to shift the emphasis to any of the other characters has resulted in a wonderfully intimate and poignant film. Its undeniable strength is its child’s-eye perspective on the harsh realities of adult life, and the vulnerability that this reveals can be hard to watch. All Maisie wants is for her parents to be there for her, but she is shuttled back and forth between her them, abandoned to the care of anyone who will look after her and continually patronised. She is too young to acknowledge fully what is happening to her – perhaps ‘What Maisie Saw’ would have been a more fitting title – and so it is heartbreaking to see the shield that her innocence provides being gradually eroded by her mistreatment. Onata Aprile is superb, playing Maisie with a beautiful, wide-eyed curiosity; if we see a better performance from a child actor this year then we will be very fortunate.

As expected, the rest of the cast also deliver fine performances. Moore and Coogan deserve credit for showing that their characters, despite their deplorable use of Maisie as a trophy with which to goad one another, do actually love their child. Yet the disdain they have for one another blinds them to the need and potential for them to care for Maisie together. Alexander Skarsgård and Joanna Vanderham play Lincoln and Margo, the new partners of Maisie’s mother and father, respectively. Their tender, sensitive performances as the mediators caught up in the middle of the confrontation show that there is some hope for Maisie, even as her parents’ selfish incompetence escalates. In fact, the second half of the film brims with the delight felt by Maisie and, in turn, by the audience. However, McGehee and Siegel do an admirable job of ensuring that What Maisie Knew does not tread too far down this route, either: there is a fitting balance between optimism and despair.

Another effect of telling the story through Maisie’s eyes is that the audience are encouraged to think for her and debate the uncomfortable issue of child custody on her behalf. As sad as marital separation and the resulting complications are, they cannot be ignored, and this film demonstrates how much children of separation can suffer, despite their lack of responsibility for their predicament. What Maisie Knew highlights the value of a family’s love and togetherness, and reminds all of us who have been lucky enough to experience it to be grateful for this and not to disregard its importance.

The beautifully simple tone of the film is summed up when Maisie’s mother, trying to shepherd her to another stranger, tells her, ‘I found this really nice girl with a dog who can watch you’. ‘What kind of dog?’, Maisie replies. This perfectly encapsulates the innocence of a young child caught up in the middle of an ugly custody battle, an uneasy situation that is addressed sensitively in What Maisie Knew through strong performances and direction.

The religious landscape in Sweden

The Two Faces of January