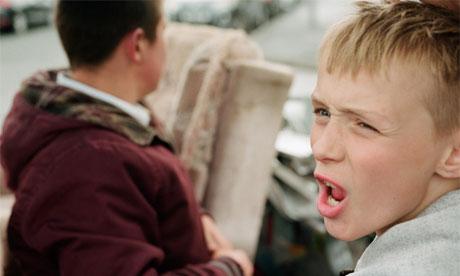 
The Selfish Giant mesmerised me. Its cinematography is so intimate that I felt wrapped up in the depression that plagued the characters. Writer and director Clio Barnard presents two teenage boys living in poverty and dysfunction in Bradford. Arbor (Conner Chapman) and Swifty (Shaun Thomas) support one another when it seems they have no other companionship and nothing positive in their lives.

Arbor’s ADHD is so intense that if he does not take his medication he repeatedly throws his fists into whatever is nearby. His father is missing, his brother is a drug addict and his mother can barely get a word of respect out of either of her sons. Swifty is the only one who has a calming effect on Arbor. Although the larger of the two boys, Swifty has a soft spot and is often shy. Through Arbor’s encouragement, Swifty punches a bully at school and the two of them are excluded. They take to gathering scrap metal and selling it to Kitten (Sean Gilder), the ruthless owner of a local scrapyard who soon calls upon Swifty to ride his horse in a gypsy race. Arbor is desperate to make more money and takes to stealing and reselling. Swifty brings the money home to his mother (Siobhan Finneran) to help support an abusive father and several younger siblings who have to eat cold beans for supper because the family cannot afford to pay the electricity bill.

The devastating tale juxtaposes English countryside with industrial structures. One of the most powerful images is of a vivid red and orange sunset that rests behind several steel towers atop foggy grasses. Such images provide breathing room from the otherwise tight visual imagery throughout the action. The camera is often right next to a character, drawing the audience into the scene; and it is constantly moving so I felt as if I was moving with the characters. This style gave me a greater sense of Swifty’s heartache for his family and of Arbor’s pain, which he masks with anger and pride.

I felt tied to these characters, but I did not feel as if I was one of them. Perhaps the fact that they are facing the trials of poverty in such a wealthy nation is such a disconcerting concept to me that it kept me from being fully invested. Yet their struggles are so intense that I could not help but hurt at seeing the plight of the young teenagers and their families. The film gave me a shock: it grabbed my heart but I was at loss for what could make the lives of these characters any better.

At first, the beauty of hope seemed so far removed that I found myself asking: if life is just about surviving long enough to reach the next day, then why would these characters want to go on living? But that beauty is there, hidden within each character and revealing itself in small acts of generosity: Arbor holding his mother to comfort her when his older brother disappeared, acting like a man far beyond his years; or Swifty calming Kitten’s horse, treating it with the level of affection he would surely like to receive himself.

But it is not just the story structure and the cinematography that make this film so spectacular. It is also the incredible performances of each actor, especially Chapman and Thomas. With such a tragic story to tell, their performances could easily have been overdramatic, but they skilfully marry naturalism with intensity so that I believed the depth and complexity of their emotion, and it helped make the story believable and intriguing.

What comes out of the struggle that these boys face is the confirmation that they are bonded, to each other and to their families, by the desire to love and be loved. The Selfish Giant does not offer a way to fix the poverty-stricken life of these families, but it does testify to the ultimate power and triumph of hope, which calls us to remain faithful to living a good life in the midst of devastating deprivation.