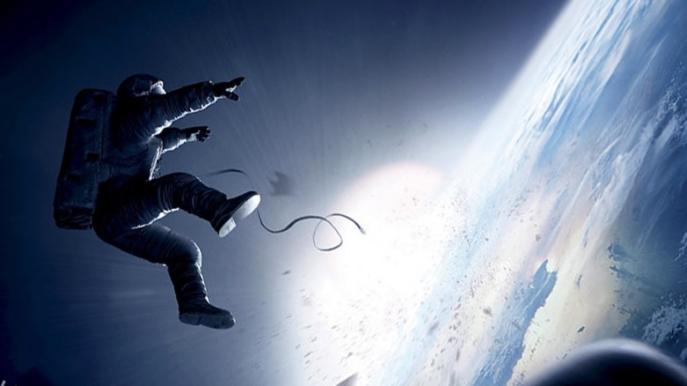 
‘Life in space is impossible’, declares Gravity; and then we are there. The scene rolls gently, adrift, with neither definite up nor down. The earth is huge overhead yet its land masses are unrecognisable. Everything familiar seems far away and out of reach, except for a twang of country music whispering through the speakers.

George Clooney is there, too, it turns out – his voice anyway. It is his radio-equipped astronaut suit through which the sound of Hank Williams is piping. Another tethered space-walker announces joyfully that his repair job is a success. Then we hear from Sandra Bullock, charmingly seasick, as she tries to work out the kinks of some new technology designed to improve the Hubble Space Telescope.

Things are going well. Space might not be so bad after all.

Except for those pesky Russians, who, despite having abandoned the space race almost fifty years ago, are still up to no good out here, it seems. They had to pick today of all days to blast one of their own defunct spy satellites into a million jagged space-bullets, which are sent spinning into orbit at 17,000 miles per hour in a cloud of menace and destruction.

No sooner is spaceship Explorer pulverised than Bullock slingshots, tumbling and alone, into the freezing void; no sooner does Clooney retrieve her than his rocket pack depletes to a level only good for one desperate burst toward the International Space Station; no sooner . . . You get the idea. But these almost predictable – and unrelenting – concatenations of chaos have not prevented the world-weary professional movie critics from raving about Gravity, nor will they release most viewers from tense fist-clenching for more than a moment or two of reflective reprieve.

But there are such moments. Take, for instance, the hopeful moment when an isolated Bullock finally hails someone on her radio, only to discover that she is talking to a man on earth – and they do not share a language. Their inability to communicate intelligibly does not prevent some elemental connection, however, and they achieve a wistful kind of sympathy in jointly mimicking a dog howling over the transistor. The film’s general naturalistic undertones can be discerned here, where it seems the philosophy is something like humankind is a species tied together by its basic animal nature.

Another moment of reprieve follows directly. We are reminded that Bullock’s character had had a daughter, dead now, who fell victim to a senseless playground accident, ‘the stupidest thing in the world’. The evolutionary implications – i.e., of primordial chance and a random, meaningless universe – are immediately challenged, however, by her searching request for someone out there to pray for her. She feels the necessity, she laments, but never learned how. There is some religious complexity to the vision of Gravity, noteworthy for being cast by the same director who brought us Children of Men.

The best instance of this profundity, and what makes the film more than just a survival flick at one and a half million feet, is when it becomes evident that Bullock’s predicament in space is a direct parallel to her predicament vis-à-vis human relationships. In the wake of losing her daughter, she blasted into self-imposed exile, isolating herself from the dangers and vulnerabilities of love. She would finish work, she relates, and ‘just drive’ – not to anywhere in particular, just floating in a kind of earthside free-fall; precariously safe, yet empty, cold and alone. The film’s opening declaration – ‘life in space is impossible’ – now takes on a new significance. We discover that the defining decision of this wounded woman’s life is whether to risk everything in a dangerous re-entry to the living world, or simply to drift, letting inertia drag her into a frigid and unending solitude.

Jean-Paul Sartre wrote, ‘hell is other people’. Yet Dante described hell’s final circle not in terms of searing magma and unbearable proximity of persons, but as frozen silence and separation. Gravity might be viewed as a clash of these two poetic portraits.

Most watchers will find it worth the ticket price, I suspect, for the experience and visuals alone – all the more so in 3D. But even more will be taken away, I think, if it is realised that even in an age of spaceships and science, there is still mystery in the dark night of the sky, and alchemy in the dark night of the soul. An ancient paradox describes how the loss of one’s whole world can change to gain, and the tears of grief to gratitude. Now a cutting-edge image shows a solitary star-sailor wrestling a hundred miles above the clouds: she has been through hell on earth, but we can little doubt the better way to heaven.

In the Heart of the Sea