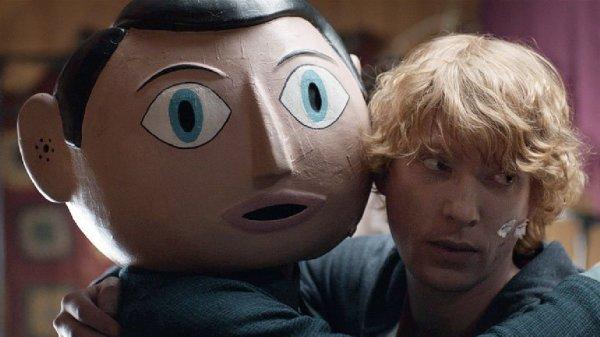 Frank is a polarising film. Were you to interview a roomful of audience members, you would no doubt find someone lauding it as a truly original masterpiece, while the person next to them shakes their head, unsure as to what they have just witnessed.

Indeed, such a mix of opinions might well be found in the same viewer, such is the off-beat, tumbling narrative of Frank. The hysterical madness of the early parts of the film, however, is unlocked by an ending that is as heart-warming as it is surprising.

That this film is so difficult to pin down should come as no surprise when its origins are examined. Jon Ronson (together with Peter Straughan) wrote the film and based it loosely on the life and career of Frank Sidebottom, a curious pop star of the 1980s and 90s, who wore a giant, papier-mâché head. All the time.

Ronson obviously mined his experience of playing keyboards with Sidebottom’s band, as the film tells the story of Jon (Domhnall Gleeson), an eccentric young man with delusions of musical grandeur who stumbles into an unconventional pop band, The Soronprfbs, fronted by the enigmatic Frank (Michael Fassbender).

The band are a ramshackle group: a moody French bassist (François Civil); his girlfriend, Simone (Hayley Derryberry), who plays drums; and the hard-nosed, often aggressive, theremin-playing Clara (Maggie Gyllenhaal). Their in-fighting, experimental sound-recording and complete lack of direction are all incapably managed by Scoot McNairy’s Don.

When the band’s keyboard player is carted off to hospital early on, Jon is invited – with only hours to spare – to come and stand in for him at that night’s gig. That the gig ends in disaster does not deter Don from inviting Jon over to Ireland, where the group prepare to record an album. As Jon attempts to follow Frank’s frenzied guidance to uncover his own musical excellence, the band’s mania begins to reveal itself more frequently.

As events move forward with dark humour and more than a sprinkling of swear words, Jon begins to take the reins. His tweeting and blogging about the album’s recording is brought to life simply yet stylishly on screen, and showcases to the audience a growing interest in the band. This leads The Soronprfbs to travel to the United States, but disaster follows them. Eventually, the cracks turn into chasms and things, unsurprisingly, start to fall apart.

Lenny Abrahamson is a director who has consistently and adeptly managed to both entertain and provoke his audiences. It appears as if his career to date has been a careful preparation for this film. He can mine humour from bleak situations (see Adam and Paul), sketch an in-depth character study around an isolated small-town man (Garage), and land an emotional punch while detailing a difficult situation (What Richard Did). Each of these skills is on display in Frank.

While the story is relatively straightforward, the main characters are anything but. At times, it seems as if scenes are being coloured with a broad paintbrush, while the content of the situation itself appears to call for the care of a calligraphy pen. This unevenness can provoke discomfort in the viewer, but all of this is resolved beautifully in the final few minutes of the film, when all the scars are (literally) brought to light; the vanity and weirdness culminate in a very real and perfect denouement.

There is a peace that comes with the final shots of Frank which, though perhaps still perplexing, feels very real to the characters of the film’s world. Fassbender’s commitment to the role pays off, and the vulnerability of mental illness is eventually treated with the sensitivity that it deserves. The viewer is then left to piece together the earlier parts of the film in the light of its ending. The risky decision to change the whole vision of the film in the final frames requires considerable bravery – from the writers, the director and the actors – but, thankfully, it does indeed pay off in the end.