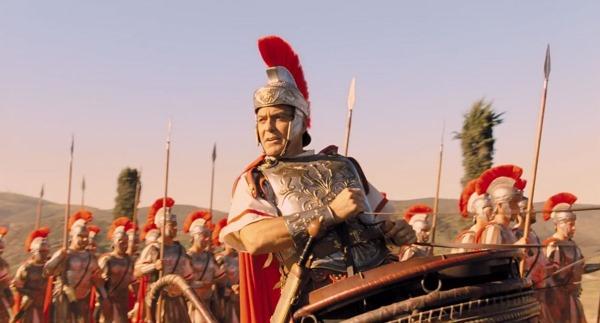 The writer-director-producer duo Coen brothers have a habit of exposing the vices of their characters at the climax – think of Barton Fink and O Brother, Where Art Thou? – but in this latest installment in an oeuvre spanning four decades, they get it out of the way early. The opening shot shows us a wooden crucifix and moments later we listen as Eddie Mannix (Josh Brolin), the managerial executive in charge of a 1950s Hollywood studio, unburdens his soul in the confessional. This is good timing, as it makes unnecessary the ponderous self-reflexivity to which guilt-wracked souls and films about filmmaking are particularly prone. But even better, it permits the Coens to roll out the red carpet for an unrelentingly rollicky comedy that is just as funny as it is almost profound.

The plot follows Mannix as he carves a bigwig wake through golden era Tinsel Town. His superstar Baird Whitlock (George Clooney) has been kidnapped from the set and is being held for ransom; single mother DeeAnna Moran (Scarlett Johansson), renowned for onscreen innocence, needs a legal fiction marriage to safeguard her image; and a big boss in New York insists that cowboy actor Hobie Doyle (Alden Ehrenreich) play the lead role in director Laurence Laurentz’s (Ralph Fiennes) sophisticated drawing room drama. The incongruities are constant and convert readily into gently barbed ironies and well-judged badinage.

Religious themes recur throughout. The studio’s major film in production, the eponymously named ‘Hail, Caesar!’, is subtitled ‘A Tale of the Christ’ and supplies bountiful opportunity for theological and film-within-a-film wit. In a scene almost predestined for classic status, Mannix calls in a group of religious leaders to pre-screen the film for possible faux pas. He is looking for theological opinion, but the Orthodox minister, for example, is hung up on a farfetched chariot stunt. When he, the Protestant pastor and the Catholic priest begin to debate the exact nature of God’s fatherhood to Christ, the Rabbi cuts in that, ‘God is a bachelor. And he’s very angry’. Tonally, it works, and their disagreement about ultimate things diminishes comically into what at some level it almost undoubtedly is: a mix up of personal foibles and human folly.

Additional religious jestering shows a stagey Saint Paul stumbling back from his vision on the road to Damascus, only to show his point of view as a blank screen with the editor’s note: ‘Divine presence to be shot’. Later, an actor hanging from the cross is asked if he wants a boxed or hot breakfast, but when pressed about whether he is a principle or an extra, ironically, he isn’t sure.

It is not all gags, though. Subtly interwoven with the hilarity and self-deprecatingly-self-aware ‘movie magic’ are moments that hover on the edge of something substantial. For instance, it is at the feet of the aforementioned Christ (whose face, incidentally, we never see) that Whitlock delivers a gloriously anticlimactic speech. The attending crew look up from their duties, caught up in the moment, which builds climactically to its ruin at the final word. Whitlock, in character as a Roman centurion, gazes up in wonder at the crucified Lord, and marvels what insight he and we all might understand if only we had but . . . The missing word, as the trailer reveals, is ‘faith’.

The multilayered irony of this ellipsis communicates a lot at once: the transporting power of the movies plus their probably insuperable shortcomings; the perhaps-otherwise-inaccessible profundities conveyed by fictional characters plus the oddly intermixed and incongruous lives of the actors who play them; the outer reaches of art and imagination plus their hazy shadings into the mysteries of belief. The episode suggests so much, in fact, that if one had to select a single cinematic moment to communicate all that film as a medium can and cannot say about reality as perceived by faith, this really might be it.