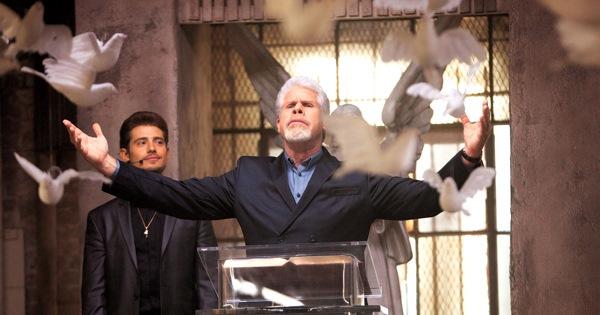 Some things in this world we are never going to understand. Take, for instance, a man standing in a public fountain, naked, arms raised and shouting incomprehensibly to the heavens. Cases like this, the opening scene of Amazon’s original series Hand of God, might be impossible to judge on words alone. Their speaker could be deranged, on drugs, or, as he later claims, moved by the Holy Ghost.

Judge Pernell Harris (Ron Perlman) is, indeed, fresh up from his baptism. He may have, for all we know, truly experienced spiritual rebirth. He may also be moved to pray in the tongues of distant men and angels. He may even, it is not outside the possibilities of faith, have really received a vision from the Almighty in connection with his son, PJ (Johnny Ferro), now in a coma at the hospital. These are possibilities, yes, but what follows renders them increasingly improbable.

For starters, there is the content of these visions. The apparitions, which only Pernell sees and hears, insist that PJ’s attempted suicide involved foul play which must be investigated and avenged. Focusing only on practical obligations with moral questions momentarily aside, Pernell has a wife to grieve with, a demanding job at a courthouse and a quarter-billion-dollar business deal to clench, but vigilante justice, these spiritual powers insist, should take precedence.

Then there are the circumstances of his conversion. Reeling out of his presumed-dead-son’s hospital room and into a bar, he meets a young woman, Alicia (Elizabeth McLaughlin), who allures him into a rogue charismatic church she founded with her ex-conman lover, the Reverend Paul Curtis (Julian Morris). There, all in one night, he ‘meets Jesus’, gets saved, makes a hefty donation and ends up in the aforementioned fountain. His visions begin a few hours later.

One need not dismiss miracles in principle to find Pernell’s escalatingly incredible. Granted, moral conversions often lag behind intellectual and emotional ones, but as he gets ever more tightly wrapped in plots, murders and cover-ups -- not to mention the ongoing affair which may or may not be technically extramarital from the moment Reverend Paul ratifies his bigamy -- Pernell’s claim to be ‘God’s anointed’ rings ever more hollow. Even halfway through the series, all claimants to faith are so off-base and corrupted that the real miracle amidst the alleged miracles would be if anyone finds their circumstances convincing enough to care.

The basic problem is that the accidents of Christianity are consistently accompanied by the substance of crime, violence and illicit sex. In another context, the words and symbols of faith the series uses might have carried conviction - one thinks particularly of a sermon on sin and forgiveness the Reverend Paul preaches directly after cheating on Alicia and relapsing on crystal meth - but here they are simply exploited. There is a parallel, then, between the vacuity of Pernell’s self-commentary and the series’ sensationalised presentation of Christian faith: in both cases the religion of the Living Word gets stripped down to mere meaningless words.

Faith before the flood: The Ark