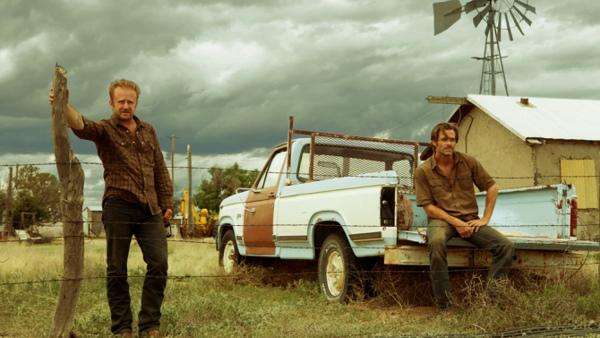 What do you expect from a heist movie? It’s likely that the label conjures up thoughts of meticulous planning, high action, big money and not a little style, particularly after recent films in that genre such as the Ocean’s trilogy, Now You See Me and Inception. Although Hell or High Water is being marketed as a heist film on the grounds of its basic plot, it bears little resemblance to its fellows in that category.

In just over 100 mins, we see the Howard brothers, Toby (Chris Pine) and Tanner (Ben Foster), carry out a string of armed robberies on small banks in West Texas, pursued by two rangers, Marcus (Jeff Bridges) and Alberto (Gil Birmingham). Both partnerships bring their fair share of humour, warmth and depth to the proceedings, not least due to the excellent performances. The brothers’ backstory and motivations (which, in another counterpoint to the genre, are devoid of greed) unfold naturally through their dialogue, and the social commentary from the law-enforcers puts that in context. That combination gives this film the substance that makes it more than just a crime caper.

While in one sense this film tells one family’s self-contained history, in another it tells the story of a Middle America which is getting an increasing amount of screen time, fictional and non-fictional. Electoral patterns account for much of the latter attention, as the world has watched the US presidential campaigns; but dramatists are also beginning to recognise the central states as more than just the places from which protagonists escape to begin living a full life in a coastal city. They are as much the locus for good and evil, joy and grief, life and death as any metropolis – although it is fair to say that the second of each of those pairings tends to provide more dramatic fodder. This film adds to the crop of visceral (Winter’s Bone) and honest (Nebraska) testaments to life in those states; and similar projects on the small screen include the fictional True Detective and true-crime drama Making a Murderer, although both surpass their cinematic counterparts in darkness and despair. All of these contribute to a growing awareness that meaning, and therefore the stuff of good drama, is not to be equated with what happens under bright lights in big cities.

Hell and High Water is a film that matters for other reasons, too. An only-slightly-contrived speech from half-Mexican, half-Native American Alberto identifies the fleeting nature of ownership: he laments that the land on which he sits was taken from his ancestors 150 years previously, and is now being similarly taken from its current owners – only this time not by an army, but by banks. He declares this outside a café in which every customer for decades has ordered the same meal, as we find out to comic effect, which serves to highlight that the static (and perhaps unambitious) nature of small town life makes it neither invisible nor immune to forces of change and ‘progress’. He speaks to the frustrations of every community which finds itself voiceless in the face of opposition.

Hold Alberto’s speech alongside one made by Toby at the film’s ‘conclusion’ (forgive the deliberate inverted commas) about his poverty having been handed down by his parents, and their parents, and theirs before them, and another message of this film becomes clear: history matters. Whether personal, familial, local, national, societal – the experiences that have gone before shape the present, a present in which we have the power to shape the future. It’s verging on Ignatian: survey your life story and pray with it; don’t wish it any different but learn from it and use your history to make future choices to bring you closer to God. (Although, of course, Ignatius would not advocate the action points that come from whatever version of this process the brothers have undertaken).

This isn’t a glamourous piece of art – it’s filmed in shades of khaki rather than technicolour – but its impact far exceeds its flair. The recent achievements of director David Mackenzie (Starred Up) and writer Taylor Sheridan (Sicario) secure this project a fair amount of credibility even before the title sequence, but drilling beneath its surface will reveal that it is not only well executed, but also carefully considered and rewarding. Maybe it is the archetypal heist after all.