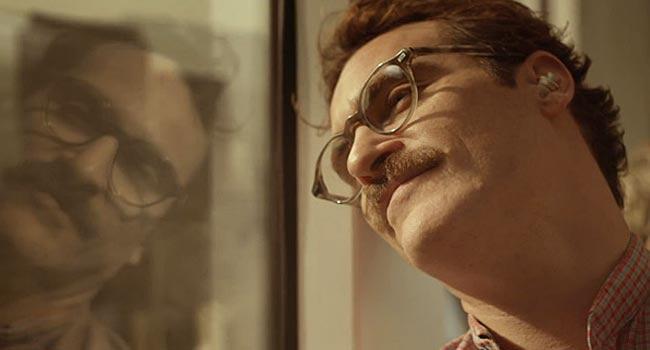 Set in a middle-future LA, Her is a story of middle-aged coming-of-age.  Never mind that Theodore wears a moustache and grandpa slacks, works a nine-to-five and is filing for divorce; he is our adolescent.  Love, sex and immersive invisible hypertext form the gestalt from which he must painfully differentiate a self, and his process of maturing is even more complicated than we might expect.

This is because in his world cyberculture has taken a few leaps forward.  The web is hands free.  Book publishing and letter writing are the reserve of privileged nostalgics.  And society, already tech-immersed, has just been introduced to the first artificially intelligent operating system (OS).

Which is great.  This means no more manually sifting through annoying inboxes or remembering important appointments.  If you’re lucky, your OS will also compose original piano scores, laugh at your jokes and whisper in your ear as your head hits the pillow at night.  There is a danger, of course: if your OS also attends to you as keenly as Theodore’s in the gravelly alto of Scarlett Johansson, you will be very much in danger of falling in love.

This is our hero’s learning curve. Theodore must plot his course through an updated yet recognisable urban world:  everybody is only a voice-command away yet there are no screens to touch.  But did I mention there is sex?  Web pictures; chat rooms; internet-arranged third-party surrogates; yes, even a heightened moment with his OS ‘girlfriend’.  Director Spike Jonze does not flinch to imagine a variety of attempts at (mostly failed) intimacy in an age in which most communication is electronic.  There is not one unawkward climax.

At a deeper level, though, Her is a moving story about some of the intricacies of intimacy.  The intelligent operating system might be interpreted metaphorically as an adolescent dream of love.  Facilitated by a trendy, white, computerised earbud, the voice and person of ‘Samantha’ are very much in Theodore’s head.  She has little obvious to do besides probe his thoughts, attend to his wants and meticulously rifle through his old notes, all in an air of wonder and endless enthusiasm.  There is a sense that her personality consists entirely in an infatuation with his.  She is the wish-fulfilment of the self-obsessed.

Problems arise, then, when she begins to take up interests elsewhere:  that is, when she starts to evince some qualities of genuine independence.  Our hero, disconcerted by the growing feeling that her personality is more than merely an extension of his own, reaches a moment of crisis.  Can he continue to love her, somebody distinct, with all the entailed vulnerability?  Can he risk admitting into his inmost workings someone so utterly and dangerously out there?  Can he attempt the kind of love that has been described as ‘an exodus from the self’?

The profundity of the film lies in its answer to these questions.  Theodore, so alive to the emotions of others and so neglectful of his own, must be loved all the way into his murky and circuitous depths before he is liberated from self-consciousness.  Significantly, his adolescent fantasy is neither dismissed nor crushed:  it is only abandoned once fulfilled.  He is invaded and entangled by a god-like intelligence, attentiveness and tender care, and, paradoxically, it is in this immersion that he finally discovers his self.

Overall, it is not a film I will hasten to re-watch.  The tone of its philosophical search is more often melancholic than profound, and moments of potentially tender beauty are frequently wrecked by unnecessary expletives (‘You’re always going to disappoint somebody, right?  So f*ck it’).  This is not a film for everyone, but the mature viewer with the patience to await the payoff, a stomach for discomfort and an ear for subtle beauty in a minor key may well be pleased by the screening’s end to have made the acquaintance of Her.

iWitness: Please, sir, can I give some more…?