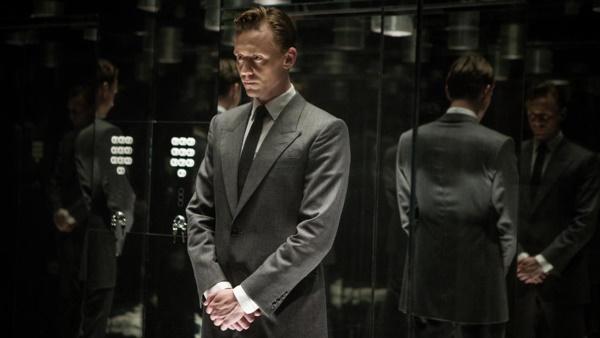 Secure within the shell of the high-rise like passengers on board an automatically piloted airliner, they were free to behave in any way they wished, explore the darkest corners they could find.

So J.G. Ballard describes the context in which the residents of his fictional tower block find themselves early in his 1975 novel High-Rise, on which Ben Wheatley’s new film is based. The novel and the film proceed to shine a spotlight into these dark corners and explore what happens inside the high-rise when all social, moral and legal conventions are abandoned as the residents exploit their pseudo-freedom – cue ‘mania, narcissism and power failure’, which find explicit, carnal expression.  If that sounds like something of an adult version of Lord of the Flies, that would not be entirely inaccurate, but Ballard’s novel is more subtle and probing than that description might suggest.

Tom Hiddleston is Dr Robert Laing, the newest resident of the now fully occupied block. In the novel, he is a recent divorcee who moves into the block in which his sister also resides, a few floors below. In the film, however, there is no mention of a divorce but there are references to a deceased sister, and even a question about whether Laing was responsible for her death. That change is fairly inconsequential to the plot, but it is a convenient shortcut to thickening the cloud of suspicion around the doctor, which would otherwise be fairly thin. On screen, with the exception of the occasional accusatory aside from his neighbours, he comes across as a little too much of a follower, as someone who gets caught up in and goes along with the escalating chaos. The novel makes it clearer that Laing is rarely alarmed by the proceedings and that he is well able to rationalise the circumstances in which he finds himself, which gives him an eerie quality; the film has to rely on voiceover (Laing talking about himself in the third person) in order to convey this.

This is an example of the film’s failure to get to grips with the novel’s intensity, which is drawn from holding the extreme behaviour of the residents in dialectic with the cold rationality that underpins it. When our senses are stylishly overloaded, as they are here, we too readily associate such excess with heated fervour of one kind or another, and so the power of Ballard’s original story is diminished. As a result, the film loses momentum long before the story concludes.

But if the film doesn’t quite grasp the motivations of its characters, it does do justice to the means and even the ends of their behaviour. It captures well the oscillation between decadence and brutality in the lives of all of the high-rise’s residents (and the points at which these converge); and the fact that, as Ballard puts it:

The ultimate goal of the high-rise [was] a realm where their most deviant impulses were free at last to exercise themselves in any way they wished. At this point physical violence would cease at last.

The name of the game then is a removal of all order, not the overthrowing of the established one which is personified in the figure of Anthony Royal (Jeremy Irons), the architect of the building who lives on its top floor.  Royal conceived of the building as the locus of a new social order, which towards the end of the novel is likened to a ‘high-rise aviary’ which Royal dominates, an analogy which is interestingly prefigured earlier:

Royal liked to think that [the gulls’] real motives for taking over the roof were close to his own and that they had flown here from some archaic landscape, responding to the same image of the sacred violence to come.

The reference to ‘sacred violence’ is a signpost towards a Girardian reading of the story, but I would argue that it is not a straightforward one. This is not a case of the residents of the high-rise excluding and sacrificing one (well, several) of their own in order to restore peace; it is almost as if this isolated community has recognised the falsity of scapegoating as a way of securing a society. But rather than pursuing another way to unity, it chooses to embrace simultaneously the consequences that follow from both accepting and rejecting this misunderstanding: a perpetuation of violence and a society in disarray.

The descent into mayhem that we witness has several all-too-familiar dimensions – the lower residents’ desire to enjoy the luxury afforded to their elevated neighbours, the unequal distribution of resources and energy, the rights of the individual challenging the good of the community – and so the piece should absolutely be read as a warning. Not a warning of the fallacy of exclusionary violence, but of the results of the same unquestioning pursuit of technological advances against which Pope Francis cautions us in Laudato si’ (§106-114). ‘In many ways, the high-rise was a model of all that technology had done to make possible the expression of a truly “free” psychopathology.’  If the resolution of the story represents the climax of technologically-powered freedom, then we all ought to be wary of pursuing the high life.