Skip to main content
Photo by Graham Holliday at flickr.com 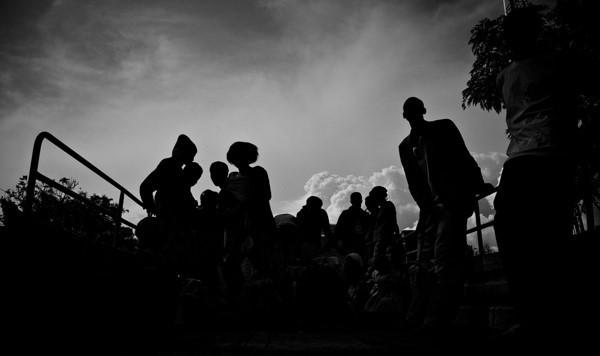 At a time when public discourse in the UK about immigration is increasingly driven by fear and negativity, it is more important than ever to give a voice in the debate to refugees, asylum seekers and migrants, says Louise Zanre.  At the beginning of Refugee Week, 16-22 June 2014, she describes how Jesuit Refugee Service projects are attempting to do just that.

The tone of the public debate about immigration in the UK has become increasingly hostile over the last twelve months. The government’s response to this in the 2014 Immigration Act has capitalised on this hostility. Some of the measures in the Act, which received Royal Assent in May, were truly headline-grabbing: landlord checks on migrant tenants (albeit a pilot scheme at first); a migrant health levy (details of which are still to be determined); the removal of a right of appeal from the vast majority of immigration cases; and the introduction of measures to deprive naturalised British citizens of their citizenship.  A lot of the measures on detention and removals, which are in some ways more worrying, have gone largely without notice or comment.

The government probably expected the Immigration Act to have a much smoother journey through Parliament than in the end it did.  It was delayed slightly by the change in public debate on immigration, which became dominated at the end of 2013 by alarm about the potential increase in EU nationals migrating to the UK.  There was a proliferation in media coverage of the issue, much of which expressed horror about Bulgarians and Romanians gaining unrestricted access to the UK.  The result of this was the attempt by one backbencher to get an amendment into the then Immigration Bill to limit access by EU nationals to the UK.  The continuing concerns over immigration were evident even after the Bill became law: the campaigns for the European election in May were largely based on the issue. And still, barely a day seems to go by without immigration being mentioned in a negative way in a news report.

None of this is really anything new.  Over the fourteen years I have worked at the Jesuit Refugee Service, immigration, asylum seekers and refugees have hit the headlines regularly.  The headlines are, for the most part, negative; sometimes they amount to outright scaremongering.  It is difficult to know how much of the agenda is set by the media, by the public or by the politicians.  In a sense it does not matter.  The result is that a significant proportion of British people think that there is too much immigration to the UK, and blame immigrants, asylum seekers and refugees for the housing crisis, unemployment and the lack of resources in the NHS.

The tone of the debate – that of scapegoating for the lack of resources and opportunity in some sectors of British society – has provided successive governments with easy political capital.  It is much easier to be seen to respond to public concern by getting tough on immigration than it is by addressing the poverty and deep-rooted inequalities in the UK.  The latter option requires a lot more political will and a willingness by everyone to take a long, hard look at our society: we need to ask ourselves how we want to live together, and think about the type and quality of the societal relationships we want as a nation.

What is often missing from the wider debate is the effect that such negative attitudes have on people who are seeking sanctuary, as well as on immigrants more widely.  Last summer, after the notorious ‘Go home’ vans and increased street-based immigration checks in London, people attending the JRS day centre in Wapping, East London told us how scared they were and how unwelcome they felt in the UK.    Many of the people we accompany have told me that they are afraid to tell people they know that they are asylum seekers in case they are treated differently, or shunned completely.  Others have told me that they have been shouted at or spat at when someone has found out.

Hearing the personal stories of how people are treated (either by the public or by the labyrinthine immigration and asylum bureaucracy we have in the UK) and how they feel as a result of that treatment is part of the wider educational process we need to invoke to change hearts and minds.  Currently there seems to be more sympathy around for refugees and asylum seekers than for immigrants.  It is not that long ago (five to ten years only) that those sympathies were reversed.  This is partly due to the success over the years of Refugee Week, which is a fantastic educational and awareness-raising opportunity and has become part of the annual framework for refugee charities. It is also due in part to the falling numbers of asylum seekers coming to the UK in recent years: this is probably a combination of a coincidence  of geopolitics and changing forced migration routes, and also of the increasing barriers to access to Europe and to the UK to claim asylum in the first place.

So what can we do about this?  How can we go about changing attitudes?  Well, education and awareness-raising are, of course, important – and not just about refugees and immigration, but in order to engage critical thinking and a values-based reflection about our wider society.  We also need to find many more opportunities to introduce the voices, thoughts and experiences of refugees and migrants into the wider debate.

The opportunity we have at JRS, through our mission of accompaniment, service and advocacy, is to model a different society, an alternative to fractured societal relationships. We offer a welcome to those who feel unwelcome; we walk in solidarity with them; and we offer a relationship based on dignity, respect, compassion and equality.

The starting point is the welcome at the door, the cup of tea or coffee, sandwich and fruit offered to the person who attends our day centre.  It is the offer of a social visit, to bring care and companionship to the person in either Harmondsworth or Colnbrook Immigration Removal Centre. Conversations are had.  Lives are shared in their joy and sorrow.  While some modest practical assistance may be offered (travel grants, toiletries, telephone top-ups; referrals to solicitors, health professionals or specialist organisations), our focus is really on accompaniment, on that side-by-side walking through life together which forms a radical hospitality that reimagines society.

One of our day centre users recently expressed his gratitude for the normalcy of his time with us.  He can have an everyday conversation about the football team he supports or life in general.  He can invite a friend to have a coffee with him in our day centre.  And of course he can also, as he wants to, speak to us more closely about the difficulties he faces in his life – with confidence and knowing that there will be no judgement, only respect, in that engagement.

Accompaniment flavours everything we do.  It is a glue that holds our service-delivery and advocacy together, because it is based on the relationships in which we participate.  Partner organisations such as English PEN, who have run several series of creative writing workshops at JRS, tell us that the character of the workshops run with us are very different.  One of our recent series of workshops was on photography, run with Fotosynthesis.  Over a period of twelve weeks, a group of nine participants from different countries with diverse ways of seeing their lives came together to learn new photography skills and to share their perspectives. Their insights and personal experiences shape this exhibition as an expression of both themselves as individuals and the world around them.  In this way their voice will enter into the debate and help to colour it in a more positive way.

Please do try to visit the exhibition, if you are in Central London between the 27 June and 10 July.  It will take place at the Lumen Gallery, Church Café, 88 Tavistock Place, London WC1H 9RS from 9a.m. – 5p.m. each day.  More information about the photography workshops and exhibitions are on our blog:  http://www.jrsuk.blogspot.co.uk

Louise Zanre is Director of JRS-UK.

Put to the test