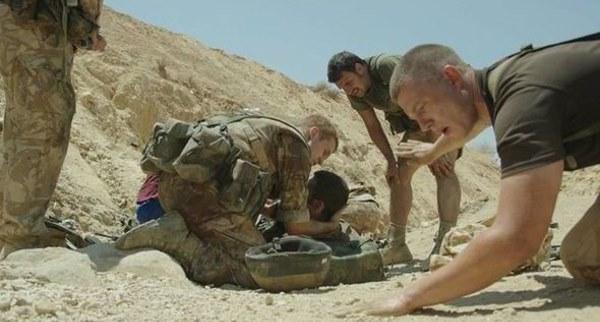 Kajaki is a film for those who like their violence real; it is not for the squeamish. This is not pornographic violence (no context, no commitments, no comment), nor is it the cartoon glamour of Tarantino.  Set in the Afghanistan desert in 2006 near the Kajaki dam, it tells the true story of a few days in the life of a platoon from 3 Para.  High above the dam in an observation post, these young warriors while away the boredom with banter, watching the occasional suspicious activity of the Afghans and the Taliban.  These are warriors from one of the Army’s toughest regiments, strong and fit, but these young bodies look both tough and vulnerable simultaneously.

The story unfolds when they spot an illegal Taliban road block.  Calculating that the target lies well beyond the range of small arms and unwilling to use mortars because of the risk to civilians, the soldiers  quickly plan a patrol that will escort a sniper to a firing position on a ridge across the valley.  The plan goes awry when one of the Paras steps on a landmine as they cross a wadi, blowing off his leg.  We are spared nothing – the blast of the explosion, the stunned and deafened shock, the chaos, the raw red flesh and the screams that go on and on and on.  Tourniquets out, morphine syrettes in and the casualty is slowly stabilised.  But stuck in a minefield, they dare not move; and stuck in a wadi they need a helicopter with a winch to get the casualty out, but the answer comes, in what seems like callous euphemism, ‘Sorry, all assets deployed’.  Help arrives in the form of a Chinook helicopter – but as it tries to land, the downblast detonates another mine: another casualty, more screams, more gore, and still more screams.  And then another rescue attempt goes wrong: another mine, two more casualties.  And still the screams go on.

For much of this film there is no action.  We are stuck in this minefield with these soldiers, going nowhere, frightened to move, helplessly awaiting the next explosion, and desperately waiting for a helicopter with a winch to come and rescue them.  Repeatedly they are promised, ‘Medevac inbound – ten minutes’, only to have hopes dashed when nothing turns up.

The film is well cast with entirely plausible characters and a script that captures not just the jargon (delete the expletives and the film would be ten minutes shorter), but the deep relationships that military training, shared hardship and comradeship engender.  Some rather wooden acting in the opening scenes gives way to strong performances.

As an ex-infantryman I recognised these men and their black humour: one says as he goes out on patrol, ‘If I don’t come back, tell your mother I love her’; another, a double amputee in the minefield, keeps his spirits up by saying how he will get drunk when he gets back to Aldershot, and is told,’Mate, you’re going to be legless for the rest of your life’.  Hilarity all round.  Don’t expect political correctness in this minefield.

Help comes at last, and three of the four injured men are saved.  The closing credits show photos of the real-life soldiers, many of whom were given medals for their bravery.  This film is harrowing to watch because of its gruelling realism.  I walked out of the cinema thinking two things: how difficult it must be for anyone who has been through that to make sense of it and start again; and how lucky am I to have two legs to get me out of here.