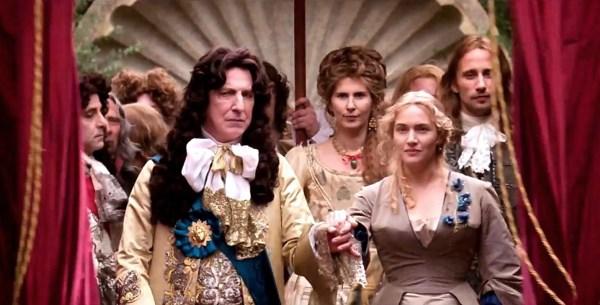 It’s a promising start. A young boy pulls wide the door to his father’s bedchamber and before entering lets out a little squeak of gas. When this is the first sound to greet the waking Sun King, Louis XIV, we sense right away that this account of the landscaping of his palatial gardens at Versailles will be lighthearted and irreverent. What one may not catch right away, however, is the stink.

Alan Rickman must be applauded for aspirations of grandeur, if nothing else. He plays the king both on- and off-screen in his second directorial feature: imagine his signature manner of speaking translated speech by speech, shot by shot, scene by elaborately established scene, into every aspect of a film.

As much as it ends up feeling like a show that should be subtitled ‘Alan Rickman presents Alan Rickman’ – the closing image has him standing poised at the static centre of a whirl of dancing French elites – the focus is allegedly the budding romance between two landscape designers commissioned to redesign his royal grounds. Madame De Barra (Kate Winslet) is hired as one of the assistants to ‘Master’ André Le Notre (Matthias Schoenaerts). He is aloof and burdened by classical precedents; she is unorthodox in her ideas about what still qualifies as order, and is adventurous enough that en route to her interview she deliberately off-centres a pot in Master’s personal garden. This is symbolic, we get it: just as she displaces this miniature conifer so shall she reconfigure the structure of Master’s affections and the preconceptions at the French court about what constitutes mastery over nature. So far, so good.

But things quickly go to seed. The acting by the main characters is strong and even colourful in places, yet fatally disorganised by the impediments of a rocky script. Madame De Barra’s primary intention, apparently, is to hide the grief and guilt involved in her child’s death. While this could be an interesting complication in a character driven by an even stronger desire – or as the gradually uncovered backstory of, say, a supporting-role manic pixie dream girl – when the protagonist’s primary motivation is to evade emotional engagements, we end up standing in a mud hole for two hours while someone saves her from herself. This story climaxes where it ought to begin.

Other clunkers abound, the worst of which is probably when we discover in the recently sabotaged garden the same glove that Master had sometime earlier fastened on the wrist of his scheming wife (rather securely, as it seemed at the time). This is the kind of cheap paperback melodrama most of us began avoiding shortly after puberty, the primary problem with which, as with De Barra’s character, tends to be a missing emotional centre.

The score is lovely, it should be said, and a few good thoughts dance momentarily across the surface of this period piece which is nearly overworked into the ground. A garden, we are reminded, was the home of humanity’s ancestors in Eden, and in his garden, says Louis XIV, France shall discover an image of Heaven refashioned. A recurring theme of unruly nature which persists through the impositions of human effort might speak, on the one hand, to the penultimate ineradicability of human sin. On the other hand, it might suggest the opposite: that a fundamental goodness in nature’s design endures even through the tyrannies imposed at intervals by the too-tidy human mind. This final suggestion says best how a little chaos, in the end, might prove a good thing – or even, more surprising still, how something good might come out of A Little Chaos.