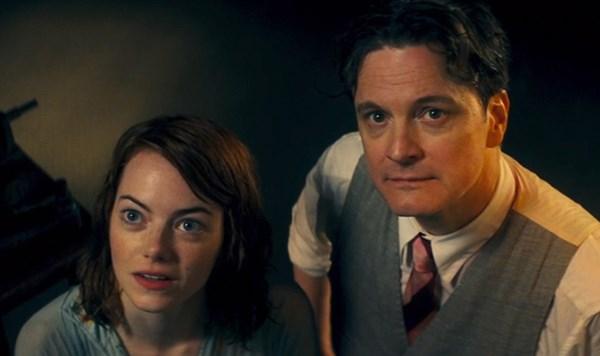 ‘I think Mr Nietzsche has disposed of the God matter rather convincingly’ – just one of several ‘theology-lite’ asides that pepper Woody Allen’s latest offering, Magic in the Moonlight…which is light on much more besides.

Colin Firth is Stanley, a product of the enlightenment, a man who believes only in what he can see and vehemently denies the existence of anything beyond. He plies his trade (in disguise) as a professional magician and is a master of his craft who knows – or so he thinks – the secrets behind every trick in the book. At a friend’s (Simon McBurney) request, he sets his sights on debunking the charade that he thinks is being put on by a young American medium whose ‘talents’ are being utilised by a wealthy American family in the South of France.  Emma Stone’s Sophie Baker seems too good to be true, so much so that even Stanley finds himself being convinced by her abilities.

The cast are adequate, but all are under-used in rather two-dimensional roles.  Firth doesn’t bring his usual charm, but it’s hard to see how that could have been any different given the script. For most of the film, he is little more than a resolutely-atheist straw man intent on dampening any sparks of mystery or possibility that might kindle a fire in him. Emma Stone ought to feel let down that Allen didn’t bring forward the momentum from the roles he created for Cate Blanchett and Sally Hawkins in last year’s Blue Jasmine, two of the most interesting female characters in recent years. While her individual performance works well enough, Stone is mismatched with Firth and so the chemistry that could have enabled an audience to buy into Stanley’s predicament is never there. McBurney neither surprises nor unnerves, and the usually-brilliant Jacki Weaver and Marcia Gay Harden barely get a look in.  Hamish Linklater, as Sophie’s bumbling admirer, is probably the only character to whom audiences will warm.

It is a pleasant film, watchable not least because of the soundtrack, scenery and staging of the Côte d’Azur in the 1920s. In the absence of much else to comment on, the brief – and at times inadvertent – forays into theology might be worth a mention. The film is hardly a serious venture into spirituality, but one could argue that the theistic worldview that Stanley rejects is profoundly un-Ignatian.

On more than one occasion, Stanley is asked why he can’t conceive of there being ‘more’ to life. ‘More what?’, he responds. The original question is, in some senses, flawed, or at least it says something about the faith of the person who asks it. If it arises from an assumption that we must look beyond what we can see and touch and hear in order to find anything of value, then the person who asks it certainly does not have the spiritual tools to find God in all things.

When Stanley finds himself believing in Sophie’s mysticism, he rejects his former rationalism thus: ‘To say, “I believe in the dignity of man” is simply not enough’ – but it is, actually, to say quite a lot. That collection of ideas that we call Catholic Social Teaching aims precisely at universal assent to this statement and at filling it with meaning. To suggest, as this film does, that an affirmation of man’s dignity is devoid of spiritual meaning, is to deny room for a Christian humanism that embraces the joys and sufferings of human life.

Seen through a certain lens, then, Magic in the Moonlight presents a false dichotomy between having faith and finding things of value in this world. But that is, admittedly, the wrong lens through which to view this film.  Just don’t be surprised if you feel, when the credits roll, as if you’ve missed the trick. You haven’t; there is no magic here.